(CNN) -- Secretary of the Senate Nancy Erickson has rejected Roland Burris' appointment to the Senate, an aide to the secretary told CNN. 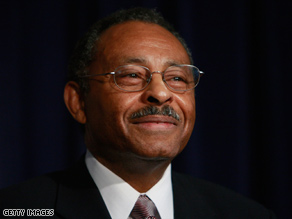 Roland Burris says Illinois Gov. Rod Blagojevich's problems have nothing to do with him.

Erickson rejected Burris' appointment because his certificate of appointment was missing the signature of Illinois Secretary of State Jesse White, the aide said Monday.

Rule 2 of the Standing Rules of the Senate states that the secretary of state must sign the certificate of election along with the governor.

White has declined to sign the certificate, siding with some Senate Democrats who say Burris should not be seated because of the cloud over Illinois Gov. Rod Blagojevich, who is accused of trying to sell President-elect Barack Obama's Senate seat.

According to a Democratic source and a Democratic Senate leadership aide, without the signed certificate, Burris will be denied access to the Senate floor.

But Burris insists he has the legal right to serve as senator and has said he will appear at the Senate's door Tuesday.

Watch what Burris says about the appointment »

"I am going [to Washington] to be seated. I am the junior senator from the state of Illinois -- that's all I can say," he said Monday at an airport news conference in Chicago, Illinois, before leaving for Washington.

He said he is not bothered by controversy surrounding his appointment by Blagojevich because "the appointment is legal."

Pressed by reporters on what he would do if he is refused admission to the Senate floor, Burris said, "If I am turned away, my lawyers will take it from there, and we'll see what happens."

He said he has not been contacted by anyone from the Obama team, and he insisted that he is not upset at the situation surrounding his appointment.

"I'm not angry with anybody," Burris said. "In fact, I'm enjoying this on behalf of the people of Illinois."

In an interview Monday with Wolf Blitzer for CNN's "The Situation Room," Burris downplayed the issue of a missing signature on the certificate of appointment.

"We know that under Illinois law and constitutional law that the secretary of state can in no way veto legal action of the governor," Burris said. "So that signature is only perfunctory and ceremonial to put the seal on it for, you know, recording and filing purposes."

One possible compromise being considered by some in the Senate Democratic leadership would be allowing Burris to be seated in the Senate so long as he agrees not to run in 2010.

A senior Democratic source familiar with Senate leadership deliberations said a Democratic concern about seating Burris is that his association with Blagojevich would make him so tainted that he would lose the Democratic seat if he ran in the next election.

The compromise would clear the field for other Democratic candidates that the leadership considers more viable to run in 2010.

Democratic sources cautioned that this is just one idea being discussed and that the Democratic leadership hasn't formally settled on making the offer to Burris.

The source familiar with the deliberations said one key to this compromise, and a way around declarations that anyone Blagojevich appoints is tainted, would be to give the Burris appointment political legitimacy by having Illinois Lt. Gov. Pat Quinn publicly endorse it.

Asked about the possibility of agreeing not to run in 2010, Burris told reporters, "I can't negotiate in the press."

Senate Democratic leaders have scheduled a meeting with Burris Wednesday.

Senate Majority Leader Harry Reid on Monday said lawmakers have the legal authority to block Burris' appointment, but Reid has also left open the possibility that Burris could be seated.

"Let's just wait and see and when we have something real, we'll deal with it," he said, adding that Burris will "not be allowed on the floor" until his appointment is certified.

He dismissed the idea of Burris not running in 2010, saying, "I think that would not be a good deal to me."

Burris said he will meet with Reid on Wednesday. "I will tell him I'm here to take my seat," he said.

Burris, 71, is one of Illinois' most accomplished African-American politicians.