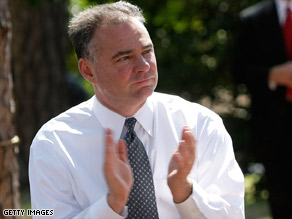 Kaine, who was mentioned as a possible running mate for Obama during the presidential race, will serve on a part-time basis until his term as governor expires in a year, the officials said.

Kaine was one of the first prominent Democratic leaders to endorse Obama during last year's primaries.

There was no immediate comment Sunday from Obama's transition team or Kaine's spokesman.

Before being elected governor in 2005, Kaine served as lieutenant governor and mayor of Richmond.

He is married and has three children.