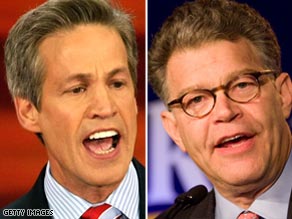 GOP Sen. Norm Coleman, left, and Democrat Al Franken are in a battle for a Minnesota Senate seat.

The state's Supreme Court had ordered that rejected absentee ballots be counted if local officials and each campaign could agree that the selected ballots were rejected mistakenly.

Local officials identified 1,350 such ballots. The Franken campaign wanted to count those and leave it at that, but the Coleman camp took issue with hundreds of them and sought to add about 650 more.

Since the Franken campaign would not agree to these ballots, the Coleman campaign sought the intervention of the state's high court. The court is considering the request but has not set a hearing at this point, and it is still unclear whether it will.

At the start of a meeting Saturday as the secretary of state's office counted the 950 rejected ballots, Coleman attorney Tony Trimble asked Deputy Secretary of State Jim Gelbmann to cease any counting.

After about an hour recess to consult the state attorney general's office, Gelbmann returned, saying the decision was to "not slow down this process today, get the counting under way. ... We are relying on the oral advice of the attorney general."

He cut Trimble off when he attempted to respond, but Trimble said, "This is a public meeting, and I'm going to have my say." Gelbmann gave him two minutes, and Trimble said that he objects but that the Coleman camp will reluctantly abide by the decision.

The Coleman campaign has maintained that there has been no uniform standard in reviewing and counting rejected absentee ballots.

Secretary of State Mark Ritchie had hoped that the state canvassing board would complete the counting and allocation of these votes by Tuesday at the latest so a result could be confirmed. A result would not mean a winner, however, since Republican Gov. Tim Pawlenty would also have to sign off on the election.

Both campaigns have seven days after the board certifies a result to file a post-election contest. Pawlenty would probably not sign anything until all legal battles are exhausted.

The unfinished business in Minnesota will probably mean the state will be without a second senator when the new session is sworn in Tuesday.

Sen. John Cornyn, R-Texas, chairman of the National Republican Senatorial Committee, has said GOP members would filibuster any attempt by Democratic leaders to seat Franken early, even if he remains in the lead, until the certificate is signed.