Obamas checking in to hotel steeped in D.C. history

(CNN) -- The hotel that will be home to President-elect Barack Obama and his family for the next couple of weeks offers one of Washington's best views of their future home, the White House, and a past linked with political movers and shakers. 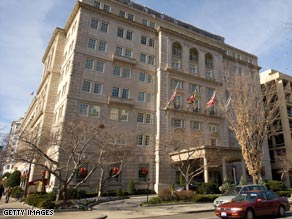 The Obama family will check into the historic Hay-Adams hotel in Washington this weekend.

The Obamas will be moving into the Hay-Adams hotel this weekend, aides say. They're doing this in part so that the family's daughters, Sasha and Malia, can begin school when classes reconvene after winter break.

They had hoped to move earlier into nearby Blair House, which presidents-elect traditionally occupy five days before moving into the White House. But the Bush administration said the house, which is used as a guest house for visiting dignitaries, already had events scheduled there and guests who could not be displaced.

The Obamas will move into Blair House on January 15.

According to its Web site, the Hay-Adams takes its name from past residents of the site -- one of whom had close ties with Obama's favorite U.S. president, Abraham Lincoln.

John Hay, a private assistant to Lincoln and later secretary of state, and Henry Adams, an author and descendent of presidents John Adams and John Quincy Adams, both lived on the site the hotel now occupies.

The two, their wives and geologist Clarence King were a group of friends that dubbed themselves "The Five of Hearts," going so far as to have china and stationary letterhead printed with the nickname.

In 1884, Hay and Adams bought adjoining lots at the corner of 16th and H Streets, and their homes became Washington's leading salons.

Their discussions of politics, literature, science and art attracted the likes of Theodore Roosevelt, Mark Twain and author Henry James.

The homes were bought and razed in 1927, with the Italian Renaissance-style Hay-Adams House erected in their place at a cost of $900,000.

It was bought by the Ieu family of Japan in 1989 and was closed from October 2001 to March 2002, during which time it underwent a $20 million renovation.

The hotel sits across Lafayette Square from the White House. It has 145 guest units, including 21 suites. Its Web site advertises rooms with unobstructed views of the White House, St. John's Church and the square.

Local legend holds that Henry Adams' wife, Clover, committed suicide in 1885 and now haunts the hotel. The story goes that she appears most frequently in December on the hotel's fourth floor.

The Hay-Adams' roof is frequently used by film crews when an aerial view of the White House is needed.