Toobin: Why Tiger Woods may not be talking to police 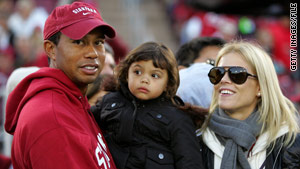 That followed a police announcement Sunday that Woods had canceled a third interview with investigators.

Woods suffered minor injuries in the accident, which occurred early Friday in his luxury neighborhood near Orlando. In a statement issued Sunday afternoon on his Web site, Woods offered no details of his wreck, except to say he had cuts and bruises and was "pretty sore."

"This situation is my fault, and it's obviously embarrassing to my family and me," he said. "I'm human, and I'm not perfect. I will certainly make sure this doesn't happen again."

CNN: Why do you think Tiger Woods has canceled three interviews with police?

Jeffrey Toobin: Tiger Woods is under no legal obligation to speak with police. The Fifth Amendment gives everyone an absolute right to refuse to talk to them. He may be counting on the fact that if no new news emerges, everybody will move on.

CNN: Can the police do anything about it if Woods continues to refuse to talk to them?

Toobin: The police don't have a lot of options. If someone doesn't want to talk to you, you as a police officer can't do anything about it. In theory, they could get a search warrant, but you need probable cause that a crime took place, and at this point, I don't see anything that would justify it.

CNN: The Florida Highway Patrol says the delay is surprising because the accident is so minor. What does Tiger Woods gain by not talking to them?

Toobin: Woods may not talk to them because there is possibly something unpleasant and embarrassing that he doesn't want to share with them, and he has that right. Based on what is publicly known, Woods has a public relations problem much more than a legal problem. He's arguably the most famous athlete in the world, and his team's overall strategy is a gamble that his general statement of responsibility won't be overtaken by events or other disclosures.

CNN: Tiger Woods said today that he won't be attending his golf tournament in California this week because of injuries sustained in the car crash, and has cancelled his scheduled press conference as host of the event. Does this fit in with the strategy you think his team has adopted?

Toobin: I think the decision not to attend the tournament shows how serious this event is, in Tiger's life as well as his work. Again, this is more a personal and business problem than a legal problem, but he needs to figure out a way to show the public what happened, or explain why he won't be talking about what happened. Obviously he doesn't have that answer yet.

CNN: A story in last week's National Enquirer alleged that Woods has been seeing a New York night club hostess. The woman has denied any affair with Woods to The Associated Press. She's also apparently retained attorney Gloria Allred. Why do you think she's retained an attorney?

Toobin: The woman may go public to repeat ... what she's said to the AP and publicly deny the affair, or perhaps to say that she was libeled by the Enquirer. Gloria Allred's clients tend not to disappear from the news media.