Palin in black and white

By LZ Granderson, Special to CNN 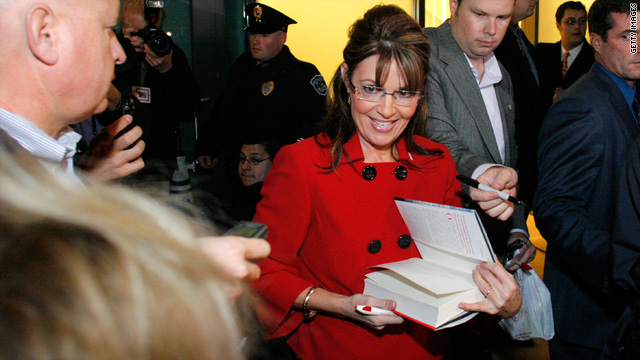 Editor's note: LZ Granderson is a senior writer and columnist for ESPN The Magazine and ESPN.com. He is the winner of the 2009 Gay & Lesbian Alliance Against Defamation award for online journalism and the 2008 National Lesbian and Gay Journalists Association award for column writing.

Grand Rapids, Michigan (CNN) -- Sarah Palin's book tour came through my city the other day and I scooted over to the mall, looking to get an autograph and a handshake.

Unfortunately, I got neither.

I wasn't in line at 5 a.m., so I wasn't one of the 1,000 or so people who obtained the special wristband necessary to gain access to the rogue one.

However, I did get a lot of strange looks from the line, which I guess was to be expected. After all, I'm a black man with dreadlocks and, judging by the racial makeup of most of the cities Palin has scheduled for her tour, it doesn't seem I'm her target audience.

I'm not suggesting that she should avoid going to places like Noblesville, Indiana, or Washington, Pennsylvania, both with overwhelmingly white populations. It just seems that in going to few diversely populated cities, she's purposefully steering clear of minorities. I mean, what author with a $5 million book deal avoids promoting books in large cities?

Palin's curious tour schedule takes me right back to some of the more disturbing displays during last year's campaign, when people at some campaign rallies at times made racist remarks.

This is not to say I believe Sarah Palin is a racist. But she said or did very little to address the racist ugliness around her during the campaign. In fact, she egged it on with her smiles and nods and calculated silence. She knew she was in the midst of a dangerous fire but, instead of dousing it, she opted to feed it and bask in its warmth and light, exchanging the ethics she talked about for the votes she lusted after.

Holding different views from an opponent on abortion or the economy is one thing; saying "He's not one of us" in reference to then-Sen. Obama, or ignoring the chants of "Kill him," is totally different. That's not about a healthy debate over policy. That's using equivocal language and timely silences to massage racist views under the guise of rallying supporters. It's irresponsible, it's immoral and it's dangerous.

The Southern Poverty Law Center has found a near-35 percent increase in antigovernment militias and white supremacist groups since 2000, and the center said opposition to Obama's election has only increased the phenomenon. There was even a Facebook poll -- quickly taken down -- asking if the president should be killed.

A lot of this has nothing to do with Sarah Palin, of course. As long as the sun shines, there will always be potentially violent racists festering along the fringes.

But for all of her speaking out in high-profile interviews -- against David Letterman, Newsweek, charges about her campaign wardrobe -- I have yet to hear Palin so much as acknowledge that some of the activity and chants at her own rallies were unacceptable. Or that the images and hateful race-based rhetoric circulating now -- such as trying to link Obama to al Qaeda because he's a person of color and his middle name is Hussein -- is unacceptable.

You don't have to be black, or a Muslim, or a Democrat, or even a maverick to denounce such talk -- just a person with a conscience.

As a Midwesterner with some Southern roots, I actually have a lot in common with Palin. I've hunted with dogs, fished, had a kid in hockey, I go to church on Sundays and, having worked in New York and L.A., I've had my fair share of run-ins with elitist, liberal snobs.

This is why I am so profoundly disappointed with her. Instead of using her popularity and influence to highlight our similarities and move the nation forward, she has allowed some of the nation's most painful wounds to be re-opened to advance her career.

I do believe she faced a lot of sexism in her career. But I also believe she didn't mind stirring up some "isms" of her own -- when it was politically advantageous.

In her book, Palin quotes Dr. Martin Luther King and says she was influenced by the courage of Harriet Tubman. She mentions the challenges faced by her husband Todd, who is part Yupik Eskimo, and his family, and writes about listening to LL Cool J. "Like every other ordinary American, I'm tired of the divisions and the special interests that pit us against each other," she writes. "Whatever your gender, race, or religion, if you love this country and will defend our Constitution, then you're an American."

If this was true, then why look into a crowd of frustrated white people and call them "real Americans" or describe the state they live in as "pro-America"? Who are the fake Americans? Where are the anti-America states? Can the answer be found in her book tour?

I didn't hear any of that red-state rhetoric from her brief speech in Grand Rapids, but by snubbing many racially diverse cities, Palin is repeating that "us against them" message in a more subtle but equally effective way.

She can't blame Katie Couric for that.