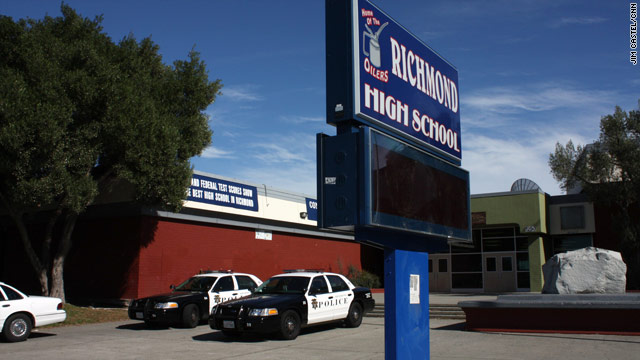 Authorities say a 15-year-old was gang raped during a school dance at Richmond High in California.
STORY HIGHLIGHTS

Editor's note: Ron Avi Astor, Ph.D., is a professor in the Schools of Social Work and Education at the University of Southern California and is the author of "School Violence in Context," published by Oxford University Press.

(CNN) -- The alleged gang rape of a 15-year-old girl on the campus of Richmond High School in Northern California while 10 or more witnesses, most of them students, looked on has sparked familiar questions: "Why are our kids so messed up?" "Why didn't these students try to stop the crime?" "What's happening in our schools?"

These are fair questions, and commentators in the media have provided familiar answers. The purported rape is another sad example of today's self-absorbed and uncaring youth. It was the media's glorification of violence that caused it. The horrific act shows how sociopathic brains develop. But it seems as if the majority of commentators have settled on the idea that the Richmond students did nothing because of the "bystander effect": The more people involved in a criminal incident, the less likely any one of them will intervene to do something about it.

Unfortunately, this "What's wrong with our children?" approach leads to a dead end, because it results in a sweeping moral condemnation of the schools, families and students in this community. These perpetrators committed a heinous act that should be widely condemned. But a discussion that focuses exclusively on the immorality of these deviant young men does not provide solutions that prevent gang rape from happening.

Talking only about the bystander effect wrongly suggests that the vast majority of teens would not call for help. Take Richmond. Claims of depraved acts by a few kids have served to demonize an entire student community.

Rather than demonize all teenagers in Richmond High School, we should be asking another question: "What can we do to prevent such heinous acts from happening?"

The answer to that question leads to a wholly different kind of dialogue, one that may surprise. It is primarily students, the reputed problem, who can best prevent acts of violence on campus.

Make no mistake about it. The alleged two-hour-long gang rape on October 24 was an extreme form of school violence. It unfolded not far from the gym where the school-sponsored homecoming dance, supervised by school staff and police officers, was being held. And students, police say, largely perpetrated it.

Research since the massacres at Columbine High School (1999) and Virginia Tech (2007) has taught us a lot about how to prevent such school violence. Chief among them is that school staff and security should patrol campuses, especially violence-prone areas, during and after school events.

According to a CNN report, a friend of the alleged victim saw blatant failures in safety precautions. She said, "I looked outside of the gym, and I saw 12 to 15 guys, sitting there, with no IDs. The officers -- not only did they not check the IDs of those students or men sitting outside of of our campus, but the security officers who are employed here did no job of checking either."

Virtually all students and teachers at a school can identify these dangerous hot spots. At Richmond High School, one such spot is "a dark alley near the back side of the school," the site of the purported rape.

As CNN reported, school officials had even requested that video cameras and more lights be installed in the area, but they were never installed. The alleged rapists and student bystanders probably knew that no one would be patrolling the area.

As important as campus patrols are in reducing campus violence, the most powerful form of prevention is believing that students can help stop crime from happening. They didn't stop the purported rape at Richmond, a skeptic might say. A possible reason is that they were not educated on how to stop it. .

Research shows us that students often know ahead of time when and where violence will flare up on campus. Strong social networks and the widespread use of cell phones and text messaging rapidly convey such information.

"The most powerful form of prevention is believing that students can help stop crime from happening."
--Ron Avi Astor
RELATED TOPICS

This dynamic can fuel violence, as officials say it did at Richmond High School. It can also prevent violence. Thousands of potential school crimes, including violent ones, have been averted on campuses across the country because students alerted school officials before the crime occurred.

Students and families using a hot line in Colorado were credited with preventing more than 206 incidents of school violence from 2004-06. As of summer 2009, this one hot line fielded 1,687 reports that resulted in crime prevention or intervention.

Alert students have also helped prevent replays of the tragedies that occurred at Columbine and Virginia Tech by tipping off school officials. Several years ago, student reports stopped a Columbine-style massacre plot, employing bombs, napalm and automatic weapons, at a high school in Green Bay, Wisconsin.

This year, tips from students and alert teachers and police disrupted a student-massacre plot, featuring pipe bombs and firearms, at Hillside High School in San Mateo, California. Since Columbine, school shootings have been averted in New Bedford, New York, and Covina, California, to name some others.

And at Richmond, it was an 18-year-old bystander, overhearing others talking about the incident, who reported the crime.

Unfortunately, the public is largely unaware of these frequently heroic acts by high school students and their teachers because they don't often get national media attention. That lack of information has helped obscure the important roles that students and their responsive teachers play in preventing school violence.

But the evidence is clear. Students who know what to do when they witness school violence, or when they have a strong sense of impending violence, will become anonymous heroes. But they need to be taught what to do, which phone numbers -- including hot lines -- to call and which school officials or police department can be trusted to act on their reports. Students also need to feel confident that they can report trouble without fear of retribution from their peers or being called a snitch.

It is up to the teachers and administrators who run schools to teach their students these procedures. They need to convince students that they will listen and respond consistently to their reports of violence or possible violence.

Yes, local police need to develop trusting relationships with students and the overall community, or nothing will be reported. But the job of preventing violence on campus belongs primarily, if not solely, to the schools.

Rather than wring our hands about the so-called immorality of today's students, we should embrace them as full partners in the prevention of violence on campus. Morality is not the issue. If students are educated on what to do when the threat of violence arises and are encouraged to follow the procedures, they can be trusted to do the right thing.

The opinions expressed in this commentary are solely those of Ron Astor.