It's time for a bipartisan health bill 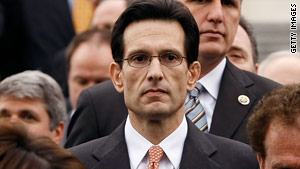 Editor's note: Rep. Eric Cantor of Virginia, is the Republican whip in the U.S. House of Representatives.

(CNN) -- Given the heated rhetoric and sharp partisan divides that have characterized this year's debate, it's easy to forget that there are several key reforms in health care that Democrats and Republicans can agree on.

Unfortunately, congressional leaders in control of the legislative agenda seem to be making this very mistake. A bipartisan deal can still be salvaged, but only if Congress focuses on common-sense principles to keep health care costs in check, preserve the doctor patient relationship and give Americans more options for affordable, high quality health care.

Earlier this month I held a meeting with House Majority Leader Steny Hoyer to discuss the prospects for securing a bipartisan agreement. The meeting was constructive and the leader made clear his preference to work with Republicans wherever possible. Yet despite his good will, House Democrats remain intent on bringing forward a bill -- H.R. 3200 -- riddled with toxic and controversial provisions that alienate Republicans and moderate Democrats.

The most prominent poison pill is the government-run plan, which the majority has disingenuously sold to the public as a way to boost competition among insurers and give Americans more choices. In reality, it will do the opposite. Private insurance companies simply cannot compete against a government with the leverage to set the prices it pays to health care providers (the downside, of course, is that care the government is willing to pay for will be rationed and of lower quality).

But the public option is not the only reason the public has soured on Congress' health care efforts. This nearly $1 trillion legislation, much like the Finance Committee bill in the Senate, dishonestly resorts to a host of budget gimmicks to give the veneer of deficit neutrality over the next decade.

For example, while the new regime's taxes and benefit cuts kick in immediately, the government spending doesn't begin in earnest until 2015. Meanwhile, the House bill also contains crippling penalties on small businesses that do not offer their employees a health care plan that government officials in Washington deem acceptable. It's as if it weren't already difficult enough for our job creators, entrepreneurs and small businesses to retain and hire workers.

The inclusion of such radioactive measures risks squandering a needed opportunity to come together in bipartisan fashion on three critical reforms that would strengthen the health care system:

More affordable health care options: There is bipartisan consensus that when individuals lose or change jobs, their families should still have access to affordable health coverage. Both political parties have put forward solutions to help Americans access health insurance at lower prices, the same way that large businesses and labor unions do.

Medical liability reform: Implementing meaningful liability reform is a no-brainer that will eliminate billions of dollars of waste in defensive medicine. The fear of frivolous lawsuits is pervasive in the medical community, and the status quo is untenable.

Congress should also calm public angst by making three simple guarantees. First, the government will not assume decision-making authority on choices that should be left to doctors and patients. Second, there will be no forced government rationing of care and no discrimination of any type. Third, the cost of health care reform must not break the bank.

Congress can accomplish the dual goals of improving the quality of care in America and trimming the ranks of the uninsured if we focus on what Democrats and Republicans can agree on, rather than on our differences. It's not too late for the majority to change course.

The opinions expressed in this commentary are solely those of Eric Cantor.