Battling my way to a Pulitzer Prize novel 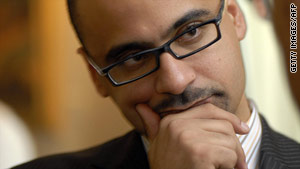 Junot Diaz struggled along without hope until he finally became a writer.
STORY HIGHLIGHTS

I actually worked really hard at writing. At my desk by 7 a.m., would work a full eight and more. Scribbled at the dinner table, in bed, on the toilet, on the No. 6 train, at Shea Stadium. I did everything I could.

But none of it worked.

My novel, which I had started with such hope shortly after publishing my first book of stories, wouldn't budge past the 75-page mark. Nothing I wrote past page 75 made any kind of sense. Nothing.

But I couldn't. All the other novels I tried sucked worse than the stalled one, and even more disturbing, I seemed to have lost the ability to write short stories. It was like I had somehow slipped into a No-Writing Twilight Zone and I couldn't find an exit. Like I'd been chained to the sinking ship of those 75 pages and there was no key and no patching the hole in the hull. I wrote and I wrote and I wrote, but nothing I produced was worth a damn.

Want to talk about stubborn? I kept at it for five straight years. Five damn years. Every day failing for five years? I'm a pretty stubborn, pretty hard-hearted character, but those five years of fail did a number on my psyche. On me. Five years, 60 months? It just about wiped me out.

By the end of that fifth year, perhaps in an attempt to save myself, to escape my despair, I started becoming convinced that I had written all I had to write, that I was a minor league Ralph Ellison, a Pop Warner Edward Rivera, that maybe it was time, for the sake of my mental health, for me to move on to another profession, and if the inspiration struck again some time in the future...well, great.

But I knew I couldn't go on much more the way I was going. I just couldn't. I was living with my fiancée at the time (over now, another terrible story) and was so depressed and self-loathing I could barely function.

I finally broached the topic with her of, maybe, you know, doing something else. My fiancée was so desperate to see me happy (and perhaps more than a little convinced by my fear that maybe the thread had run out on my talent) that she told me to make a list of what else I could do besides writing.

I'm not a list person like she was, but I wrote one. It took a month to pencil down three things. (I really don't have many other skills.) I stared at that list for about another month. Waiting, hoping, praying for the book, for my writing, for my talent to catch fire. A last-second reprieve. But nada.

So I put the manuscript away. All the hundreds of failed pages, boxed and hidden in a closet. I think I cried as I did it. Five years of my life and the dream that I had of myself, all down the tubes because I couldn't pull off something other people seemed to pull off with relative ease: a novel. By then I wasn't even interested in a Great American Novel. I would have been elated with the eminently forgettable New Jersey novel.

Oprah.com: The real meaning of your "true calling"

So I became a normal. A square. I didn't go to bookstores or read the Sunday book section of the Times. I stopped hanging out with my writer friends. The bouts of rage and despair, the fights with my fiancée ended.

I slipped into my new morose half-life. Started preparing for my next stage, back to school in September. (I won't even tell you what I was thinking of doing, too embarrassing.) While I waited for September to come around, I spent long hours in my writing room, sprawled on the floor, with the list on my chest, waiting for the promise of those words to leak through the paper into me.

Maybe I would have gone through with it. Hard to know. But if the world is what it is so are our hearts. One night in August, unable to sleep, sickened that I was giving up, but even more frightened by the thought of having to return to the writing, I dug out the manuscript. I figured if I could find one good thing in the pages I would go back to it.

Just one good thing. Like flipping a coin, I'd let the pages decide. Spent the whole night reading everything I had written, and guess what? It was still terrible. In fact with the new distance the lameness was even worse than I'd thought. That's when I should have put everything in the box. When I should have turned my back and trudged into my new life. I didn't have the heart to go on.

But I guess I did. While my fiancée slept, I separated the 75 pages that were worthy from the mountain of loss, sat at my desk, and despite every part of me shrieking no no no no, I jumped back down the rabbit hole again. There were no sudden miracles. It took two more years of heartbreak, of being utterly, dismayingly lost before the novel I had dreamed about for all those years finally started revealing itself.

And another three years after that before I could look up from my desk and say the word I'd wanted to say for more than a decade: done.

Oprah.com: 4 writers answer "What makes you you?"

That's my tale in a nutshell. Not the tale of how I came to write my novel but rather of how I became a writer. Because, in truth, I didn't become a writer the first time I put pen to paper or when I finished my first book (easy) or my second one (hard).

You see, in my view a writer is a writer not because she writes well and easily, because she has amazing talent, because everything she does is golden.

In my view a writer is a writer because even when there is no hope, even when nothing you do shows any sign of promise, you keep writing anyway. Wasn't until that night when I was faced with all those lousy pages that I realized, really realized, what it was exactly that I am.

Oprah.com: 11 ways to find your calling

By Junot Diaz from O, The Oprah Magazine, November