Umpires and referees get paid what? 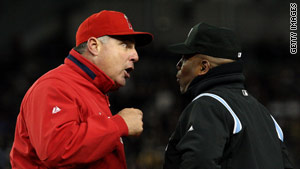 (Mental Floss) -- Major League Baseball's umpires are all over the news after a spate of, er, questionable calls throughout this postseason. Despite larger postseason umpiring crews that include two extra umps in the outfield, it feels like an inordinate number of calls have gone the wrong way.

All of these gaffes have prompted renewed debate about whether baseball should start using instant replay. How could umps blow this many calls that are so obvious when viewed in slow motion? Aren't these guys trained professionals? Are they handsomely rewarded? What do we really know about the men in blue, anyway?

After some spotty officiating in the NFL last fall, we did some digging on the officials in the four major sports. Here's what we found:

A National Football League ref can make anywhere from $25,000 to $70,000 a season, although since most of the games are on Sundays, they can also have other jobs during the week. (We'll get to those in a minute.)

That cash comes with responsibilities, though. In addition to relaying the calls to the teams and fans, a ref is also the crew chief, or leader, of the seven-man officiating team that also includes an umpire, a field judge, a back judge, a line judge, a side judge, and a head linesman.

Officials in other sports pull down more loot, but they have much more grueling schedules...

• Baseball. According to MLB.com, MLB umpires get around $120,000 when they start out in the big leagues, and senior umps can earn upwards of $300,000. Between spring training, a 162-game schedule, and the postseason, being an MLB ump is a job that takes up most of the year.

They are, however, well cared-for while on the road. Each ump gets a $340 per diem to cover hotel and food, and when they fly, it's always first class. Working a full postseason can tack on an extra $20,000, plus expenses. They also get four weeks of paid vacation during the regular season.

These guys hang onto their jobs, too; on average, there's only one opening for a new big league ump each season.

• Basketball. National Basketball Association refs are similarly well compensated. They earn anywhere from $100,000 to $300,000 for an 82-game season. There are some nice fringe benefits, too; when referee Tim Donaghy admitted to helping gamblers fix games, the NBA asked that he repay other benefits he'd pulled in over the course of his 13-year career, including $750 worth of sneakers and $4500 worth of free tickets.

Since NFL refs only work one day each week, they can have "real" jobs to supplement what they earn on any given Sunday. Some of them actually have pretty interesting jobs.

• Mike Carey, my personal favorite ref, is an entrepreneur and inventor who holds eight patents for snow sports apparel. He founded and co-owns Seirus Innovation, a ski apparel company.

• Walt Coleman is infamous in Oakland for being the ref in the "Tuck Rule Game," but he's also a fifth-generation dairy farmer who once held the position of president of the Arkansas Dairy Products Association.

• Walter Anderson became an official in the league in 1996 and got the promotion to referee in 2003. Prior to becoming a referee, he was better known as Dr. Walt Anderson, a dentist.

• Tony Corrente is probably used to dealing with unruly crowds of guys from his day job as a high-school social studies teacher.

• If Jeff Triplette seems hard to scare on the field, it's probably because he's seen worse. He was an Army Reserve colonel during the Persian Gulf War, where he was awarded a bronze star. Mental Floss: What's with those AFL throwback uniforms?

• Bill Leavy is similarly tough; he spent 27 years as a police officer and firefighter in San Jose.

• Gene Steratore must love how he looks in stripes. In addition to being an NFL ref, he officiates NCAA hoops games and has drawn March Madness assignments in previous seasons.

• And when Ed Hochuli isn't officiating a game (or working out), you might find him in a courtroom. He's a trial lawyer in the Arizona firm Jones, Skelton, and Hochuli, which employs over 80 attorneys.

It's a long climb to the top

How does one become a ref? Most of these guys have humble beginnings as officials. Carey started officiating Pop Warner games in 1972 and gradually worked his way up through the college ranks. Eventually, he became an NFL side judge in 1990 and received a promotion to NFL referee, the pinnacle of football officiating, in 1995.

Hochuli started as a Pop Warner ref in the early 1970s; he was a law school student who needed a little extra pocket cash. He then slowly made his way up through high school, junior college, and small conference college ball before getting a Pac-10 gig. He eventually made it to the NFL in 1990. It's a slow build, but if you stick it out long enough and have some natural talent, you can be the one patting his head to signal an ineligible receiver downfield.

Still not convinced it's a tough ride? In a recent op-ed in The New York Times, former baseball commissioner Fay Vincent cited the paltry salaries for minor-league umps: just $9500 for a five-month season for junior umpires, and only $20,000 a season for guys who have risen all the way to Triple A ball. Mental Floss: 31 unbelievable high school mascots