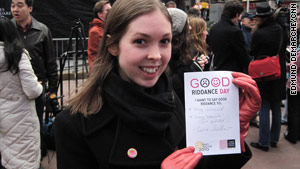 NEW YORK (CNN) -- Hope was afoot in Times Square during the third annual Good Riddance Day -- the unofficial holiday on which luck-strapped individuals are encouraged to rid themselves of the ending year's setbacks and prepare for the future.

"We decided that people should have time to get over any regrets before New Year's Eve, so a day like this makes sense," said Lori Raimondo, the vice president of marketing for the Times Square Alliance and creator of the event.

"We hope one day it becomes a national holiday," she said.

Hundreds of hard-knock-yet-resilient participants on Monday were handed black markers and white sheets of paper emblazoned with "I want to say good riddance to," and encouraged to write down their problems.

Some also brought old credit card bills or pictures of fizzled out flames.

Celebrants were then instructed to throw the sheets and papers and photos into an industrial-size paper shredder. To many, if only symbolically, it offered a palpable release of personal burdens and struggles from the past year.

"There's something about writing problems down and releasing them," said Rama Mandel, 45, from the Bronx. "There's a freedom you feel that just puts you beyond the things holding you back."

Mandel, who works with children with special needs, wrote down three words -- resentment, procrastination and fear -- on three red pieces of construction paper.

"I'm going to replace those words with 'power, action and faith,' " she said. "This is a new beginning."

Liz McCarvill, 44, from the Manhattan's West Village, admitted that she visited the event to post it on her blog. However, she was inspired by the concept and decided to participate.

"I just want to say goodbye to preconceived ideas and things that hold me back sometimes," said McCarvill. "It's a great time for a new start."

Tian Donghai, 25, of China, said he studies computer science at Penn State University. About seven months ago, he was rushed to the hospital after a blood clot appeared above his right eye, he said.

"My friends were terrified," said Donghai. "So this year, I say good riddance to poor health."

Some people used the opportunity to remember the loss of a loved one.

Sue Domino, 45, was with her family when she wrote the name of her mother, Constance Rose Trainer, who at 73, died suddenly in October of a stomach aneurism. Her mother, who lived in Pennsylvania, had never seen Times Square.

"She would have just loved to see this," said Domino. "She was supposed to be here with us."

Participation in the event appeared to be up this year, said Minerva Martinez, a spokeswoman for the Times Square Alliance. She attributed its popularity to Facebook and Twitter alerts.

"It's definitely getting viral," said Martinez. "I think people can really use this to get on with their lives."

Many participants admitted that with New Year's Eve looming, the thought of the one that got away is still a staple in last year's regrets.

"No matter what the state of the economy or joblessness, people always move on from past relationships," said Raimondo. "There are a lot of ex-boyfriends' names being shredded right now."

Tina Wong, 33, from Harlem, said after a series of bad dates this year that left her wondering if there are any good men in the city, so she says "good riddance" to bad dates.

Experts say the benefits of destroying a past memory on paper in hopes to expedite the recovery is debatable.

David Amodio, an assistant professor of psychology at New York University, said that writing down trivial things and then destroying the writing be an effective way of moving on. However, the technique losses effectiveness when dealing with more substantial life changes.

"If you robbed a bank and wrote it down on paper and threw it away, it probably doesn't help you all that much," said Amodio. "I think the same applies here."