Terrible tweens are the golden years? 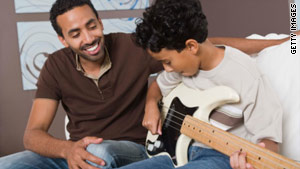 Enjoying their humor and finding projects to do together can help everyone enjoy the tween years.
STORY HIGHLIGHTS
RELATED TOPICS

(Parenting.com) -- When my kids were younger, friends with tweens gave me dire warnings: "It's a whole new world -- much worse than the terrible twos." "You won't believe the change in your kid -- like night and day." "Just wait until they hit middle school; brace yourself."

Now my older kids (A.J., 11, and Mathilda, 14) have reached the dreaded tween/teen stage. And guess what? I'm still waiting for doomsday to strike. Don't get me wrong; we've had a few bumps. But there's more to tweens than hormone surges and moodiness. In many ways, these crazy years are my favorite phase yet. This is why:

The Good News: You have a new buddy

Yes, I know, your job description doesn't read: "My Kid's Best Friend." And, no, you're not equals. But the tween years provide endless opportunities to bond on a deeper level than you did when your child was little.

I can take Mathilda or A.J. out to lunch and have a completely different experience from a few years ago, when a trip to a restaurant meant watching them color the kids' menu and knock over their milk. Now we discuss everything from their friendships to current movies to politics. (And if they have to go to the bathroom, they find it on their own.)

Sharon Pomerantz Strelzer recently experienced an unexpected buddy moment with her 10-year-old daughter, Samantha. "We had a rainy movie day, just the two of us, and the choices were to see either "Pink Panther 2" or "Confessions of a Shopaholic," says the Fairfield, Connecticut, mom. "Samantha said, 'Let's save the Pink Panther for Daddy and have a girls' day out!'" The two happily watched "Shopaholic" together.

Make it even better: You've got to shift gears during the tween phase, says Susan Kuczmarski, Ed.D., author of "The Sacred Flight of the Teenager: A Parent's Guide to Stepping Back and Letting Go."

"Enjoy the changes and be aware that she is entering a new phase -- don't expect the same old behavior."

The Good News: You're past the do-everything stage

I recently realized I hadn't washed anyone's hair but my own for ages. (Mathilda has taken over giving baths to my youngest child, 5-year-old Mary Elena.) When the tween years come around, it's exhilarating to be free of the drudgery that comes with parenting small children: wiping bottoms, pouring juice, tying shoes.

Not only that, but tweens can actually help around the house in meaningful ways, like emptying the dishwasher and taking out garbage. "It's simply less physically exhausting to be the parent of a tween," says Jen Singer of Kinnelon, New Jersey, the creator of Mommasaid.net, a parenting humor and advice Web site, and mom of Nicholas, 12, and Christopher, 11.

"My kids make their own lunches and their own beds. They're self-cleaning. When we go skiing, I don't have to run down the slope holding them in a harness. The day-to-day stuff is much easier."

Make it even better: Celebrate each new task your kids can do, and get over any guilt you have that you're slacking off by letting them take on more, says educator Annie Fox, author of the Middle School Confidential series.

Parenting.com: Why having "the talk" makes us uncomfortable

"Some parents mistakenly equate dependence with love," she says. "They feel that 'if he doesn't need me, he doesn't love me.' But do you really want to be cutting your kid's sandwiches when he's thirty?"

Encourage independence by giving tweens more complex home projects once in a while. Athena Marsh of Sewickley, Pennsylvania, expects her sons (Roy, 14, Jay, 11, and Theo, 9) to do laundry and feed the cats, but sometimes asks them to try something a little challenging.

"Last year I had Roy put a new handle on the toilet," she says. "He did it all by himself, just following the insert for directions. He was surprised -- and very pleased -- he could do it."

The Good News: He gets the jokes

"The other day, my eleven-year-old asked for an omelette, and I misheard him; for whatever reason, I thought he said 'Obama-lette,'" says Singer. "So I turned around and said, 'What is that -- filled with hope?' We all cracked up. A few years earlier, it would have been me laughing by myself."

Make it even better: Laugh along with your tween; some of the sweetest bonding times come from sharing inside jokes and offbeat references. In our house, A.J. does spot-on impersonations of characters from "The Simpsons." His Marge, Mr. Burns, and Krusty the Clown bring the house down, and sometimes I find myself saying, "Excellent!" to them in a decidedly Mr. Burns-ish voice.

This is a good time to expose kids to more grown-up movies and books, both current and classic. Of course, how far you want to go is a personal decision (our family is most comfortable in the barely PG-13 world). Recently I've introduced my kids to some of my old favorites ("Monty Python," SCTV, and Peter Sellers in "The Mouse That Roared"). They're constantly quoting from them -- it's like having our own secret language of humor.

Tweens develop passions and hobbies, whether it's basketball, Wii games, or musical theater. When Mathilda saw "The Lord of the Rings" movies, she became interested in sword fighting. We finally let her sign up for fencing lessons with a friend, and now she's an expert on the difference between a foil and an epee. Half the time I have no idea what she's talking about, but her enthusiasm is contagious.

And taking an active interest in your child's sport or hobby is good for her, too, says Fox. She gets to be the teacher, which is a major confidence booster.

Make it even better: Find a hobby you can pursue together. Marsh's son Jay is a food buff, so they often cook dinner as a team. Jamie Woolf of Oakland recently started a mother-daughter book club with her kids, Anna, 14, and Leah, 10. "We really connect over the young-adult books we're reading," says Woolf, author of "Mom-in-Chief: How Wisdom From the Workplace Can Save Your Family From Chaos."

"It's allowed me to see a glimpse of middle school culture -- crushes, cliques, and so on."

The Good News: His friends are hysterical

Sure, a group of tweens can get loud and squirrelly, but you're privy to some of the most off-the-wall conversations ever. From listening to my son and his fifth-grade buddies, I have a fairly good understanding of the 11-year-old male mind. (Obsessive collecting -- video games, Bakugan, songs from iTunes -- is the norm, and no one else's parents have as many rules as your own.)

Carpooling with tweens is a world unto itself: When Singer hauls 11-year-old Christopher and his buddies to soccer practice, she usually cranks up the radio and listens to the kids belt it out. "Last time, we all ended up singing Coldplay together at the top of our lungs," she says.

Make it even better: "Offer your house as a gathering spot for your tween and his friends, or be the mom who drives everyone to the mall," Woolf advises. "Taking advantage of their need for a ride is the best way to get to know their friends." Woolf has even brought her girls' pals on vacation. "You get a very real sense of who they're friends with and what they're up to."

The Good News: She wants to help

When tweens take on a project -- whether it's cleaning up a local park or volunteering at a food bank -- it's all or nothing. Maureen Pearson was surprised but thrilled when her 11-year-old daughter, Laura, asked to volunteer at the retirement community where Maureen works.

"She really clicked with the residents," says the Harrisonburg, Virginia, mom. "On her first day, she bounced into my office and exclaimed, 'I met a woman who was a hundred years old!'" Lately Laura has also begun babysitting in her church nursery. "She's all about being helpful," says Pearson.

Make it even better: Let them know how proud you are of their kindness and generosity, and do everything in your power to help them act on it. I recently took my kids through an exhibit on the AIDS epidemic in Africa. We all were blown away by the stories of suffering kids and the photos of children who are available to sponsor.

"We have to take on one of these kids," said Mathilda, grabbing my arm. "It's only thirty-five dollars a month." My initial, knee-jerk reaction ("Do we have an extra thirty-five bucks in the monthly budget?") paled next to her enthusiasm. How could I say no?

Don't forget the power of your example, adds Fox: "If your objective is to raise a good citizen, you have to show what that means," she says. "Make it your business to be involved, and your kid will get involved."

Look for family opportunities for volunteerism; the more time you spend with your tween, the happier everyone will be. And that's not terrible at all.

Charlotte Latvala, who writes frequently for Parenting, says her 11-year-old is a tween dream.