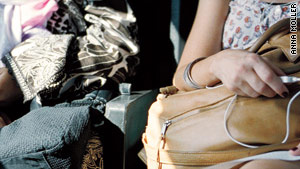 When two women meet on a bus, the one without food manages to change the other woman's outlook on life.
STORY HIGHLIGHTS

(REAL SIMPLE) -- One night shortly after Thanksgiving last year, a deeply crummy mind-set I'd taken on went though an instantaneous reversal. As if a magician had said, "Presto," the New York City landscape likewise flipped from seedy to radiant.

The shift proved that the city I move through every day (often with narrowed eyes and clenched jaw) is partly a projection of my self-centered fears. With an attitude adjustment, I came to see that a dark world can become floodlit in a heartbeat.

I had been in upstate New York. Bad flying weather had nudged me to take the bus back to the city from Syracuse University, where I teach during the week. I hadn't boarded a Greyhound since my surf-bum youth, back when the seats still sported ashtrays.

Lugging my computer bag and suitcase down the aisle that snowy day, I felt stared at, like an outsider, which, honestly, stung more than it should have.

A few stops out, a gray-haired lady and a girl about 5 years old slid into the row in front of me. Though the woman's bun was springing scraggles at the hairline, the girl's tight braids must have taken a full day to do. She had a round pudding face with curious eyes.

As I marked papers with a pen, her chin rested on the seat top before me. "Schoolteachers are supposed to use a red pencil," she said.

RealSimple.com: A witness to grace

I found streets seething with characters of the most sinister variety. Shoppers scuttled around me like so many scorpions. Under every baseball cap, a shadow was hiding a face with fangs.
--Mary Karr

Told to stop bothering the lady, the girl announced she was starving to death. At which point, the woman fished out a single sleeve of soda crackers, claiming that was all they had until they reached the Bronx -- a good five hours away.

The kid crunched loudly through the crackers in a spray of crumbs. When she complained of thirst, the woman said, "There will be water fountains at the Albany layover. Just drink your own spit."

Before long, the girl had swung around to my seat to demonstrate her double-jointed elbows and thumbs as well as a disturbingly loud clack in her jaw when she opened her mouth full bore. I gave her a pad and a pen, and soon she sat beside me outlining slope-sided apartment buildings and wavy sidewalks peopled with trolls.

In Albany, seats started to fill up, and I was advised to move my suitcase to the luggage compartment in the undercarriage. The grandmother carried my computer bag down, too.

Afterward, I headed to a nearby diner, where I bought extra sandwiches, juice boxes, and fruit -- later claiming they had inexplicably appeared in my deli bag. We three ate without talking much, and as snowy dark enveloped the bus, we lolled to sleep, jostling all the way to the city.

RealSimple.com: Not what she expected

After we had made it to the Port Authority, I stood by the lower luggage door, watching as stuff was pulled out into the bus terminal's celery green light. My suitcase made it, but not the computer bag. The grandmother and the girl stood blinking alongside me as I groused about losing student papers and manuscripts -- plus a pricey new laptop.

The driver gestured vaguely toward Lost and Found as the girl tugged the grandmother's sleeve; I felt more annoyed than panicked.

Then it dawned on me: The drawstring jewelry pouch I usually rathole in my purse at all times had also been slipped into that computer bag. I normally keep that pouch on my person at all times, but on this one occasion I happened to have placed it elsewhere.

I could envision the sole piece of jewelry my mother had left me: a delicate cameo that had belonged to my grandmother. Its absence hit me in the rib cage like a flaming arrow.

The grandmother's brow furrowed, and she seemed stricken by how unfair it all was, but then she and the little girl said good-bye and veered off into the subway crush.

At times of stress or exhaustion or fear, a jabbering voice in my head often cranks up. Loud, insistent, it never, ever has a shred of good news. Idiot, idiot, idiot, it said. Why did you move the pouch tonight?

Rather than dismiss the voice and deal with the problem at hand, I found myself projecting it outward onto random strangers. I half ran through the overheated station, pocketbook tucked stolidly under one arm. Sweating like a sow, I wrestled my suitcase up two levels of stalled escalators, all the while silently cursing this person as a dimwit, that one as a pompous ass.

RealSimple.com: What's the worst that could happen

The office of lost bus objects was lit like a dungeon and smelled like a wet sock, its counter manned by a lanky kid in a floppy Santa hat. "Your mother's cameo," he said. "That sucks."

Filling out the form, I let my misery flare. The cameo was no mere trinket by then. Forget that I hadn't worn it in decades and really had hardly ever looked at it. It was my only inheritance. Its carved visage had become -- solely through its loss -- a rare totem of maternal love, a saint's venerated bone.

I set down the pen and stood immobile for a second or two. Faced with my inert, gloomy form, the Santa-Hat Kid eventually asked, "So what do you want me to do?"

I growled, "I want you to go find somebody -- and kick his ass."

On the walk home, I found streets seething with characters of the most sinister variety. Shoppers scuttled around me like so many scorpions. Under every baseball cap, a shadow was hiding a face with fangs.

An hour or so later, I was watching my boyfriend finish dinner when my cell phone buzzed. It was the grandmother from the bus.

What followed was a turn of events that, if it doesn't convince you there's a mysterious form to our intersecting paths, may at least reignite faith in the random goodness of other souls.

It seems that the grandmother was trudging through the subway tunnel when she spotted from the corner of her eye a young man dragging my computer bag. She shot through the crowd to grab his arm, shouting, "That's not your bag!"

The crazy part is, he just let go right off, no struggle whatsoever. He dropped the handle and bolted away. "He knew he was wrong," she said.

Minutes later, my boyfriend and I found ourselves in a cab going to the grandmother's house in the Bronx. All the way there, I saw the city recover its sparkle. The Christmas lights slid like bright markers along the wet windows.

The driver regaled us with every fat reward he had gotten for returning parcels, and I told him about the half-dozen cabbies who had brought various forgotten briefcases and phones back to me over the years.

Suddenly every streetlight seemed to reveal some touching, unlikely, almost staged tableau. A homeless woman left her doorway to help heave a carriage over a curb's wide puddle; a man in a tuxedo offered the cab he had just flagged down to an old man.

My boyfriend stayed in the chugging cab while the grandmother and I hugged on the stoop.

What kills me even now was her keen concern that I would blame her for anything the guy might have taken from the bag. "We didn't even unzip it once," she vowed. Which was ridiculous, of course, since I trusted her, as I did everybody, at least that night.

I catalog lucky events like this on a back page of my journal. Since my default mood remains muddy gloom, I need a permanent inventory of inspiring moments; otherwise the seemingly miraculous can vaporize with a shift in mood. Regular prayer and meditation help, too. (Both practices I mocked as moronic until I got desperate enough to try them.)

If these efforts to rid my vision of its dark scrim pay off (I admit, they don't always), I greet the sidewalk crush with a wide expanse in my chest and a buoyant gait. Each random face appears to me like a finely embroidered quilt square in a brilliant urban mosaic.

On those other nights, when I see a terrorist hanging from every subway strap, I conjure the memory of that missing bag. It is a corrective lens I can use to click the world back into focus, to flip my inner lights back on.