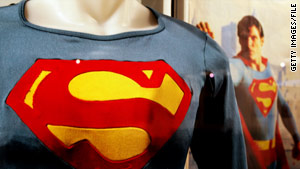 The Superman costume worn by Christopher Reeve in Superman III was auctioned off in Australia in May.
STORY HIGHLIGHTS

(Mental Floss) -- If you think comic book characters do amazing things in comic books, you won't believe what they can do off the page.

For starters, Superman brought down the Ku Klux Klan, and Donald Duck raised ships from the ocean floor.

In the 1940s, "The Adventures of Superman" was a radio sensation. Kids across the country huddled around their sets as the Man of Steel leapt off the page and over the airwaves. Although Superman had been fighting crime in print since 1938, the weekly audio episodes fleshed out his storyline even further.

It was on the radio that Superman first faced kryptonite, met The Daily Planet reporter Jimmy Olsen, and became associated with "truth, justice, and the American way." So, it's no wonder that when a young writer and activist named Stetson Kennedy decided to expose the secrets of the Ku Klux Klan, he looked to a certain superhero for inspiration.

In the post-World War II era, the Klan experienced a huge resurgence. Its membership was skyrocketing, and its political influence was increasing, so Kennedy went undercover to infiltrate the group. By regularly attending meetings, he became privy to the organization's secrets.

But when he took the information to local authorities, they had little interest in using it. The Klan had become so powerful and intimidating that police were hesitant to build a case against them.

Struggling to make use of his findings, Kennedy approached the writers of the Superman radio serial. It was perfect timing. With the war over and the Nazis no longer a threat, the producers were looking for a new villain for Superman to fight. The KKK was a great fit for the role.

In a 16-episode series titled "Clan of the Fiery Cross," the writers pitted the Man of Steel against the men in white hoods. As the storyline progressed, the shows exposed many of the KKK's most guarded secrets.

By revealing everything from code words to rituals, the program completely stripped the Klan of its mystique. Within two weeks of the broadcast, KKK recruitment was down. And by 1948, people were showing up to Klan rallies just to mock them.

In 1966, Danish engineer Karl Krøyer developed a method for raising sunken ships off the ocean floor by injecting them with polystyrene foam balls. However, when Krøyer tried to license his invention with the Dutch patent office, he was denied. Donald Duck had beaten him to the punch by 22 years.

Indeed, Krøyer's concept could be traced back to a Donald Duck comic conceived by Carl Barks. In addition to being the most celebrated artist of the Donald Duck comics, Barks was known for his scientific prowess.

So in a 1944 story, when Donald got a bump on his head that turned him into a genius, the duck managed to mumble, "If I mix CH2 [a methylene compound] with NH4 [ammonium] and boil the atoms in osmotic fog, I should get speckled nitrogen!"

Although it sounded like nonsense, it wasn't. In 1963, chemists P.P. Gaspar and G.S. Hammond wrote a technical article about methylene that included a reference to the Donald Duck story.

The final paragraph read, "Among experiments which have not, to our knowledge, been carried out as yet is one of a most intriguing nature suggested in the literature of no less than 19 years ago."

A footnote revealed that "literature" as the Donald Duck comic. It seems the web-footed children's hero had deduced the chemical intermediate long before it had been proven to exist.

But why were these top American chemists looking to comics for inspiration? Apparently, Dr. Gaspar had been a lifelong Donald Duck fan, and he'd rediscovered Donald's early reference to methylene while collecting old copies of the classic adventures.

Gaspar never disclosed how much his work owed to Duckburg's most famous resident, but then again, how many scientists would confess that they used comic books to bolster their research?

3. A Spider-Man villain keeps folks out of jail

In a 1977 edition of Spider-Man, Peter Parker has the tables turned on him. The villain, Kingpin, tracks down Spidey using an electronic transmitter that he'd fastened to the superhero's wrist. Although Kingpin loses in the end (he always does), one New Mexico judge saw beauty in his plan.

Inspired by the strip, Judge Jack Love turned to computer salesman Michael Goss and asked if he could create a similar device to keep track of crime suspects awaiting trial.

In 1983, Goss produced his first batch of electronic monitors. Authorities in Albuquerque then tested the devices on five offenders, using the gadgets as an alternative to incarceration.

Today, the transmitters are a common sight in courtrooms across the country, usually in the form of electronic ankle bracelets. Most famously, Martha Stewart donned one while she was under house arrest in 2004. Perhaps she would have felt better knowing that the gadget had once nabbed Spider-Man, too.

Like most American kids in the 1940s, Elvis Presley fantasized about growing up to be like his favorite comic book superheroes. But it turns out that The King might have been more interested in their fashion statements than their special powers.

During his early teen years, Elvis was obsessed with Captain Marvel Jr., known as "America's most famous boy hero." A younger version of Captain Marvel, the character sported an unusual hairstyle that featured a curly tuft of hair falling over the side of his forehead.

Sound familiar? When Elvis set out to conquer America with his rock 'n' roll ways, he copied the 'do, thus making it one of the most famous hairstyles of the 20th century.

But that wasn't all. Captain Marvel also gets credit for the short capes Elvis wore on the back of his jumpsuits, as well as The King's famous TCB logo, which bears a striking resemblance to Marvel's lightning bolt insignia.

Of course, Elvis never tried to hide his love for the Captain. A copy of Captain Marvel Jr. No. 51 still sits in his preserved childhood bedroom in an apartment in Memphis, and his full comics collection remains intact in the attic at Graceland.

Plus, the admiration was mutual. Captain Marvel Jr. paid tribute to The King in one issue, referring to the singer as "the greatest modern-day philosopher."