Near death, aided by ghostly companion 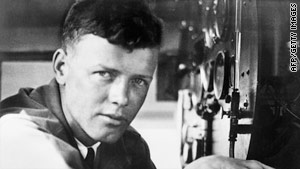 (CNN) -- At first, James Sevigny didn't know where he was. He was sprawled on the ground when he came to, and he shivered as he noticed how much of his blood had splattered across the snow.

Sevigny had had a premonition that he would die like this. He just didn't have any inkling that it would happen on this spring morning.

Only moments earlier, the 28-year-old mountaineer was climbing in an isolated part of the Canadian Rocky Mountains. Suddenly, he heard a tremendous roar: avalanche. Sevigny blacked out as a wall of snow hurled him 2,000 feet below.

When Sevigny awakened, he could barely stand. His back was broken in two places, his knees were busted, and he had internal bleeding. He gave up hope of surviving and curled up in the snow to die. But then he felt an odd sensation. He felt someone behind him and heard a voice: "No, you can't give up. You have to live." Read all about cheating death

"It was right over my right shoulder," Sevigny said. "It was like if I would sneak up to you and put my nose a quarter of an inch from your neck. It was that kind of physical sensation."

What happened next was so profound that Sevigny, a scientist who disdains organized religion, says he couldn't talk about it for years afterward without crying. Sevigny still doesn't know who that voice belonged to, but another man does. He calls it "The Third Man."

Who is the Third Man?

John Geiger has sifted through the survival stories of people like Sevigny for six years. Adventurers, sailors, prisoners of war and pilots, they all tell strikingly similar stories of being saved from death by a mysterious presence, he says.

In the book "The Third Man Factor: Surviving the Impossible," Geiger attempts to solve the mystery of that presence.

There's no way that I would have the strength to get up and walk across that valley and do the things I did to survive.
--Jim Sevigny

Most of the people who've encountered the Third Man aren't mystics, says Geiger, a senior fellow at the University of Toronto and governor of the Royal Canadian Geographical Society. They include a NASA astronaut, aviator Charles Lindbergh, polar explorer Ernest Shackleton (he coined the "Third Man" term) and atheists.

Third Man encounters aren't restricted to exotic locales, either, Geiger says: He experienced a Third Man-like encounter in the study of his home while writing his book.

"When I give talks about the book, there are always a few people who will come up afterward to say they have similar stories," Geiger said. "The debate around the book is not 'are people actually encountering an unseen being' but rather, 'what is it?' "

What science says about the Third Man

Ron DiFrancesco thinks he knows who it is. He recently experienced one of the most publicized Third Man encounters.

DiFrancesco was working in the World Trade Center's south tower on September 11 when the building was hit by a hijacked plane. He was trapped on the 91st floor of the 110-story building, gasping for air as the smoke and flames closed in. How doctor recovers after showing "no signs of life"

He was about to pass out when he sensed someone near him. Then he heard a male voice. He says it told him to get up, and it guided him through a maze of hazards to safety.

DiFrancesco was the last person to get out of the south tower before it fell, Geiger writes.

DiFrancesco never saw nor could he ever find out who helped him. But he doesn't think the presence was something his subconscious conjured.

"It was a higher being rather than an internal being," DiFrancesco said. "Maybe it was an angel. I didn't see the face of God, but I know somebody came and helped me."

Geiger says the Third Man could have several explanations. He says scientists studying the phenomenon were able to evoke the sensation of someone standing next to a solitary person in a lab by stimulating certain parts of the subject's brain.

Yet that presence did not have the active, benevolent and intelligent presence that others often cite during Third Man encounters, he says.

Maybe the Third Man is a coping mechanism, Geiger suggests. The brain creates a companion to help a person survive a terrible situation. Or perhaps there is an "angel switch" in the brain that's activated in life-or-death struggles. How some explain near death experiences

The Third Man appeared to him during one of the worst struggles in his life, Geiger says: over grief.

Geiger alludes to that moment at the beginning of his book, where the dedication page reads: "For James Sutherland Angus Geiger, June 15-21, 2007."

James was Geiger's son. He died a week after birth because of heart problems. Geiger calls the experience "the worst stress I've ever had."

Geiger says that while working on the book alone in his study, he felt an odd sensation. Someone entered the room. It felt like his son. This happened several times.

"It's instantaneous, and it's overwhelming," Geiger said. "It's like you're sitting in a room with the light off and someone enters the room. It's that kind of vividness."

Sevigny, the mountain climber, says the presence he encountered in April 1983 was just as real.

After the avalanche, Sevigny says, he was passed out for about an hour in the snow before he came to. The crumpled body of a climbing companion was nearby. The fall had killed him.

Maybe it was an angel. I didn't see the face of God, but I know somebody came and helped me.
--Ron DiFrancesco

When he first heard the voice, Sevigny says, it reminded him of a woman. It was warm and nurturing, and it gave practical advice: "You have to get your jacket on. You have to get water."

It even told him to arrange the blood dripping from his body in the shape of arrows, pointing to the way he was walking in case rescuers came up on his trial.

"I didn't question it," Sevigny said. "I didn't think about it. I did exactly what the voice said."

The presence led him through a valley to Sevigny's campsite. It constantly encouraged him when he felt like giving up.

When he arrived at the campsite, Sevigny saw three people skiing nearby and called for help.

At that moment, the presence left him, he says.

The trio rushed toward Sevigny. One was a mountain guide, another was an elite cross-country skier, and the final person was a nurse.

"If you were to be in a place and you could find three people to help you, you couldn't pick three better people," he said.

Sevigny spent months in the hospital. Today, he's an environmental consultant in Canada and a father. For about two years afterward, he couldn't talk about what happened.

"It made me cry," he said. "It was so powerful. I just couldn't tell many people."

As he talked about his experiences, his 1-year-old son, Tuzo, started crying in the background after falling.

"He's like his father," Sevigny said with a chuckle. "He climbs, and then he falls."

"I don't give it great thought," he said. "I'm not a spiritual person. I don't say it was God or a guardian angel. I have a Ph.D. in chemistry."

What he will say is that mysterious presence was the only reason he got off that mountain alive.

"If it wasn't for the Third Man, I would be dead," he said. "There's no way that I would have the strength to get up and walk across that valley and do the things I did to survive."