Change your name after marriage -- why? 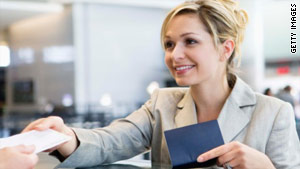 Many women fill out a lot of paperwork to change their names after marriage.
STORY HIGHLIGHTS
RELATED TOPICS

Every Sunday, I open up The New York Times to check out the wedding announcements.

They call that "the sports section for women," which is annoying, because it presupposes that, because I'm a chick, (a) I don't like sports and (b) I love weddings. To which I say, (a) I know what a hat trick is and (b) wedding invitations are just bills written in calligraphy.

No: I check out the wedding announcements because I want to see how many women change their names.

I am freshly gobsmacked every single Sunday morning when I see that about half the women -- mostly under 35, all women with careers, all women who chose to submit their announcement to the putatively liberal New York Times --are electing to give up their identity. Oprah.com: What happily ever after really looks like

What would Lucy Stone say? She was a 19th-century suffragist who was the first American woman to revert to her birth name after marriage. She even had to chastise one Susan B. Anthony by writing to Suze, "A wife should no more take her husband's name than he should hers." Stone's followers -- women who refused to change their names upon marriage -- were called Stoners.

Today only about 20 percent of American women are Stoners. In other words, 80 percent of women change their identities -- I mean, names -- upon getting married.

It makes me wish we were a more progressive country like...Iran. Yes, Iran, where Muslim women keep their names for life. So must women, by law, keep their names in Belgium, France, Italy, the Netherlands, Chile, Malaysia, Korea...I could go on, but I really like the way they do it in Spain. Oprah.com: What it's like to be 30 around the world

There, people have two surnames -- their father's and their mother's. When they have a child, she receives the first surname from the father and the second surname is the first surname of the mother, and the parents choose whether the father's or the mother's surname goes first, although this order must be the same for all their children.

If that was a bit confusing, it's just because they use the metric system.

Names are our identity. They matter. Think about it: What does the Witness Protection Program do when they want you to disappear? They make you keep your first name and change your last name. When someone illegally assumes someone else's name, we say an identity's been stolen; when someone legally assumes someone else's name, we say...you're married.

Let's cut through the most platitudinous argument: "A family shares a name." Um, nuh-uh. Did your grandmother have the same last name as you? Was she still your Nana? Conversely, does having the same last name mean you'll always stay a family? Ask the Gibsons or the McCartneys or the McGreeveys or...

• Would you want to lay down seven grand to buy a wedding dress from Vera Becker? (Vera Wang?)

• How about listen to a song from Mariah Cannon, Jennifer Anthony or Barbra Brolin? (Mariah Carey, Jennifer Lopez, Barbra Streisand)

• Or get your nightly news from Katie Monahan? (Katie Couric)

• Gloria Bale needs her surname like a fish needs a Steinem. (Gloria Steinem)

• And does the name Sonia Noonan suggest an "extraordinary journey"? (Sonia Sotomayor)

By the way, my wedding announcement was in The New York Times. When I submitted it, I wrote, "The groom is keeping his name." The Times did not publish that sentence. I guess they thought it was a typo. Oprah.com: Does marriage equal more chores?