13 signs your relationship is doomed 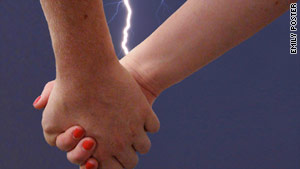 Your relationship is in trouble if you stop focusing on grooming or personal hygeine, a writer says.
STORY HIGHLIGHTS

(The Frisky) -- Last night, our own "Mind of Man" columnist was trying to tell me that couples moving in together was the kiss of death for their relationship. I think he's crazy -- always, always, always move in together before you commit to marriage, trust me! -- but it did get me thinking about what some real kiss of death moments are for couples. Just don't be mad at us if you decide to dump your boyfriend as a result.

1. You're a lot smarter than he is: Let's face it, guys can't handle when a woman knows more than they do, about anything. "And lord knows, an intelligent woman would never waste her time with a guy with pea soup for brains," says Bea.

2. Residual immaturity: No guy completely grows up (says the girl whose fiancé spent three hours playing NCAA Football 2009 on his PS3 last night), but a passionate interest in something truly juvenile will wear on you eventually, if not immediately. "I discovered his secret stash of comic books; I started to notice that the reason he got up early on Saturday mornings was to watch cartoons, and guess what? Pretty soon I stopped feeling attracted to him," says Katie.

3. Differing opinions on A) Meal responsibility and B) Palate: If s/he's not accepting of the fact that you will not ever cook for him/her (A), and especially not a steak because you're a vegetarian (B), your relationship is well-done and charred.

4. Grooming/bathing/hygiene take a back seat: You discover stains on his underwear or witness him picking his nose without shame, while you also haven't bothered to shave your legs in four months or wear anything but your worst underwear in front of him.

"After my boyfriend and I broke up is when I finally bought new bras and undies," admits Sarah. "I didn't care about maintaining any sort of sex appeal for him, but all the new guys on the horizon? Hell, yeah."

5. Girl-cations/Man-cations: This is OK in the beginning or even months into a relationship, but once you've been a couple awhile and she suddenly wants to use her precious vacation time (not to mention money) to travel with her girls to Las Vegas, be warned: She's probably weeks away from announcing she hates you. Ditto on when he announces he's going backpacking with his best friend Tommy in Peru.

The Frisky: Is your guy just lazy or does he have ADHD?

6. TV in the bedroom: No matter who decides to buy the 60-inch plasma and install it directly across from where "the magic happens," TV in the bedroom is an instant mood killer, both sexually and mentally. "The fact that my ex and I happily chose 'Seinfeld' reruns over, you know, love-making definitely signaled the end of our relationship," says Clara.

The Frisky: Demi Moore responds when a fan tells her she looks old

7. Having rugrats: If you can't agree on whether to have kids, that's a major dealbreaker. But be warned, procreators! "Once you have them, your love life is over," says Susie. "Sorry. I speak from experience."

The Frisky: The highest grossing actress of the decade is...

8. Using the bathroom in each other's presence: Separate bathrooms, or at least separate bathroom schedules, are key to a successful relationship. Kim says: "The one thing in their relationships that all of my divorced friends have in common is that they regularly had their morning pee in the bathroom while their significant other was brushing his teeth. Don't do it, ladies. Maintain a little mystery."

The Frisky: You'll be surprised by some celebs awkward phases

9. King-size beds: Even if you go to bed mad, something about a forced snuggle in a small bed is like an unspoken "you're forgiven" and allows everything bad between you to dissolve away. A king-size mattress lets the tension rest comfortably between you and a fight can go on for days.

The Frisky: Olympic weightlifter picks up a dumbbell and pops out a baby!

10. Half-truths to girlfriends: "I always know a relationship is doomed when I start telling my friends only part of the story about a squabble with my man," says Kelly. "I need the release of the confession, but by not telling the whole truth, I'm leaving out the part that would make my friends scream 'He's not right for you!'"

Chances are, you've probably already judged his actions yourself and are scared of your friends telling you what you already know -- that you deserve better.

11. A drastic change in appearance: Many times after a breakup, a woman will chop off her hair or dye it a radical color. If she does it while she's in a relationship, she's sending her guy a message: "I don't care whether you think my ears look too big with a pixie cut."

12. Momma's boy or Daddy's little girl: If either one of you respects the opinion of a parent more than the opinion of your significant other, you're headed for trouble.

"When my boyfriend would call up his mother and ask her for her advice on work, money matters, and, seriously, even what to wear to Easter brunch, I realized he was never going to value my opinion as much or more than hers," says Lisa.

13. "Oops, I mean ..." moments: She or he calling you by the ex's name outside of the bedroom is a reason to be alarmed. Though, if it happens inside the bedroom, you should probably just forget you ever met.