The 'evil zombie doll' we adore 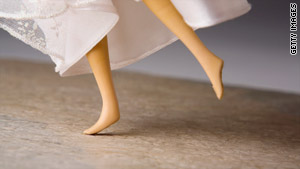 One family decided to keep a doll after bad things happened every time she left the house.
STORY HIGHLIGHTS
RELATED TOPICS

(OPRAH.com) -- Can an innocent Christmas present plunge a normal family into consensual madness?

Yes, it can, especially if the catalyst is a three-foot My Size Barbie, the first exceedingly popular toy that my daughter, Gaby, ever asked for insistently.

Her obsession meant I ended up in some remote Toys "R" Us (in another state!) one Christmas Eve about ten years ago, vying with other desperately doting dads for the last few items on well-looted shelves. But I managed to bag my first Big Gift.

The next morning, Gaby exuberantly unwrapped the My Size Barbie, immediately and inexplicably christening the doll Jessica Lynn Cohen. Why that oddly specific appellation, with its country-western triple cadence, we'll never know. It was Christmas, and it was her doll, and it stuck.

But then came the inevitable cooling off. Kids tire of gifts. And they abruptly and blithely cast them into oblivion. No big deal. We put Jessica Lynn Cohen in the basement, in a spare room we use as a catchall storage space.

Oprah.com: How to stretch your dollars this Christmas

I'd go downstairs to attend to a blown fuse and there'd be Jessica Lynn Cohen in the boiler room. We'd find her in the pantry with her arms outstretched in a sort of pious Joan of Arc gesture of supplication or in the bathroom with one leg raised high over her head like a Folies Bergère dancer. Coming upon her this way could be frightening. She had taken on the stricken phantasmal look of a ghost from a shipwreck.

She also started terrifying other people. I could always tell by the ashen face of some poor plumber or cable guy that he had accidentally stumbled upon Jessica Lynn Cohen in a dark corner of the house.

So we decided to get rid of her. But very bad things happened to us whenever we tried to throw her out.

Oprah.com: Get organized and tame the holiday madness

Within hours of the first time I left her out on the street for the garbage men, my wife, Mercedes, who'd never had a single related symptom, had a severe gallstone attack and needed to be rushed to the emergency room. I reluctantly brought Jessica Lynn Cohen back inside.

A couple of months later, I was hit by a car as I crossed a street in Culver City, California. At the moment of impact, I did not have that common experience of seeing my life passing before my eyes; I had the unmistakable feeling that Jessica Lynn Cohen was angry. I called Mercedes and asked if anything unusual had occurred in the days preceding my accident. She admitted that she'd taken Jessica Lynn Cohen to the Salvation Army.

Get her back, I said.

We tried finding a new home for her. A friend -- a single guy without kids -- finally agreed to take her in. Within two weeks, he'd developed a pilonidal cyst and his brother in Florida was arrested for embezzlement. Our friend returned her and asked that we never again discuss her in his presence.

We eventually had to reach an accommodation with Jessica Lynn Cohen and accept her as a permanent member of our family.

She is now the unrivaled centerpiece of our Christmas tradition. On Christmas Eve we keep her in a special "secret detention room." (We worry that Santa, because of his facility for seeing into the souls of all things, might discern in Jessica Lynn Cohen something irredeemably bad, and be frightened off before he has a chance to deliver our presents.) But on Christmas morning, there she stands, in her honored place of precedence, next to the tree.

Oprah.com: How to start a new holiday tradition

Yes, I suppose you could say she's an evil zombie doll who led our family to madness. But, damn it, she's our evil zombie doll. We adore her. And we're never, ever going to abandon her. And so, another Christmas will come and go, under the vigilant, unflinching gaze of Our Gracious Lady of Nonrefundable Gifts, Our Jessica Lynn Cohen.

By Mark Leyner from O, The Oprah Magazine, December 2009

Mark Leyner is the author of eight books, including "Why Do Men Have Nipples? Hundreds of Questions You'd Only Ask a Doctor After Your Third Martini."