What if you do NEED a man?

(The Frisky) -- "Some women are just happier in a relationship." 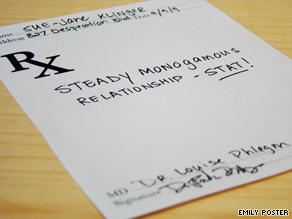 A writer realizes she took better care of her health and home when she had a boyfriend.

As my shrink said this, my jaw dropped to the floor. Did she really just say that? The woman who had feminist literature on her bookshelf and never failed to induce a pep rally of self-empowerment at the end of each session?

We were, of course, discussing (OK fine, I was complaining about) my lack of a boyfriend, and inability to get over some of the ones I did have.

For me, I surmised from my psychotherapy high horse, the issue was about loneliness and, therefore, about some childhood father complex. I thought I sounded smart; it seemed like something my psychiatrist would say herself.

But her response was both jarring and a relief: Some women are just happier in a relationship.

Huh? Isn't the modern woman supposed to be totally amazing on her own? But at the same time, the tension in my heart unclenched as I considered the phrase that potentially answered all of my romantic issues. The Frisky: Why I had breast-reduction surgery

Was I one of those women? And do they really exist? Looking back, I began to think it might be true. When in committed relationships, I was happier. When single, I was depressed. Perhaps this was chance, but I realized that I took better care of my life with a boyfriend by my side. I kept things cleaner to show respect for his presence in my living space. I bathed more often and took care of my acne-prone skin.

I dug up a paper I wrote during my senior year of college when I was living with the man I planned (at the time) to marry. Based on Daniel Miller's "A Theory of Shopping," I had explored the author's hypothesis that purchasing could be motivated by love, and proved it by shamelessly charting a week's worth of my purchases.

At the time, the list was comedic (I had a friendship with my very giving professor). But now looking at my list, I see a zeal and motivation I don't always find in my life now. In buying skim milk, bran cereal, flax bread, I was taking pride in eating healthy. With the new dishes and wine glasses, I added sophistication to our home. I recalled feeling satisfied and grown up when we began enjoying food on matching plates and not drinking Pinot Grigio out of mugs. The Frisky: Mourning the death of my single-girl friendships

When I recently asked my friends about this idea of "being better with a man" or "needing a man," a good handful of them confirmed this belief. (Definitely not all, mind you.)

One said, "I'm more organized, in control, and positive when I'm receiving male attention ... a relationship is enough to keep me motivated and excited." Another friend, Olivia, told me, "In a relationship, I have someone else to answer to. There is another person who is close enough to me to know when I'm being lazy or not living up to my potential, so that pushes me to actually be more active."

For Olivia and me, efforts of self-sufficiency outside of relationships can sometimes fall short, or more often, turn into faking that whole "I'm an awesome single woman" thing.

And I'm sorry, I do know that I'm awesome, but getting there is exhausting. I'm not saying this is everyone, but that perhaps there are women -- and men! -- who need sex with trust, or who rely on spouses for friendship rather than large social networks. And perhaps "needing a man" is an indication of the more basic human instinct -- not for reproduction, but for companionship.

The idea still doesn't sit right with me as someone who has put so much energy into making me happy. But, then again, there's a lot to say for someone who chooses to be happy. Even if it means the choice includes a man. The Frisky: 20 things every woman should do before she gets married