6 common shopping traps -- how to avoid them

(OPRAH.com) -- Alas, our romance with shopping seems to be coming to an end -- or at least it's up for careful reevaluation. 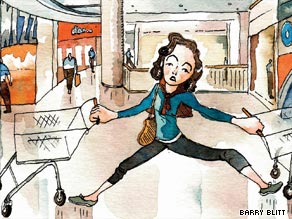 Researchers say there are triggers that tell your brain it's OK to shop.

According to research from Stanford University, more than one in 20 adults are compulsive shoppers, purchasing things they don't need, use, or even want.

That's because shopping, once devoted to procuring necessities, has come to fill multiple emotional needs -- it's entertainment, a bonding activity, a sport, a form of self-expression, and, quite often, a means of solace.

"These days what you buy is a way to connect to others and showcase your personality and values," says Kit Yarrow, Ph.D., professor of psychology and marketing at Golden Gate University in San Francisco.

So what happens now when more than five million people have lost their jobs since December 2007, and many of us are trying to curb our enthusiasm?

Ironically, "when people feel economically insecure, they tend to reassure themselves by shopping," says George Loewenstein, Ph.D., professor of economics and psychology at Carnegie Mellon University in Pittsburgh. The thinking is: "If I were economically secure, I would go shopping, so if I'm shopping, I must be economically secure." And that's just one thing to be aware of as you head for the mall. Here are a few others: Oprah.com:Finding bargains --the ABCs

The image of an angel and a devil sitting on a person's shoulders is not a bad metaphor for shopping.

Using brain scans, researchers have shown that the nucleus accumbens, an area associated with pleasure and reward, lights up as people consider a purchase, while the insula, a structure that plays an important role in pain, is activated when they think about the cost. The two brain areas compete with each other to determine whether you will buy something.

Your typical tightwad, says Loewenstein (who conducted the brain research with Brian Knutson, Ph.D., of Stanford), feels the pain of paying for things more acutely. Spendthrifts may not register it enough.

Buying a lot in one store can decrease your sensitivity to the pain of cost, says Loewenstein. "You hit the what-the-heck effect: You've spent $200; what's another $20 for a T-shirt?" He recommends going to various stores for different purchases.

Another factor that can tip the brain's pleasure-pain dynamic is a bargain. Knutson and Loewenstein have shown not only how the brain weighs making a purchase but also how it reacts to price.

The researchers gave subjects $20 to spend on a series of products they saw on a computer screen. When the shoppers considered the prices excessive, the insula became activated; when they saw discounts, their accumbens lit up like a Broadway marquee. The prefrontal cortex, associated with weighing gains and losses, also became active along with the accumbens -- and this pattern predicted a shopper's decision to buy.

Sales, markdowns, two-for-ones, and outlet stores are all designed to hit our bargain-loving Achilles' heel. So are retail tactics we should be wise to, like buying an item for $29.99 because we tend to discount it to $20 instead of $30, says Ellen Ruppel Shell, author of the new book "Cheap: The High Cost of Discount Culture."

"Even psychologists confess that they've been seduced." The anticipation of getting a good deal, says Shell, is what drives us toward the cash register, not the object itself -- and as a result, we end up with stuff we don't particularly want. Oprah.com: How to become a savvier shopper

"When you pay in cash, you see your wallet getting thinner," says Dan Ariely, Ph.D., professor of behavioral economics at Duke University. But when you use a credit card, the spending is abstract, "and that makes you trigger-happy."

In one experiment at MIT, subjects were asked to bid on tickets to a sold-out Boston Celtics game. Half were told to pay with cash; the other half could use credit cards.

"There's some evidence that the enjoyable experience of acquiring things has been paired with the touch and feel of the plastic, says study leader Drazen Prelec, Ph.D., professor of management science at MIT. "It's almost like smelling food when you're hungry. Shockingly, we found that bids were twice as high among the group that thought they would use credit cards."

Using cash is the number one antidote to overspending, according to experts. If you do pay with a credit card, beware of the trap "I've already got this debt, so it won't matter if I pile on more." Prelec compares it to the diet-blowing excuse "I ate one piece, so I may as well eat the whole cake." Oprah.com: Why cash is queen right now

That's what new research suggests. Jennifer Lerner, Ph.D, director of the Emotion and Decision Making Group at Harvard's John F. Kennedy School of Government, had participants view either a sad video (a clip from "The Champ," in which a boy cries at the side of his dying father) or an emotionally neutral one (about the Great Barrier Reef).

Afterward, she asked how much they'd be willing to spend on a sporty water bottle. Those who watched the poignant film offered almost 300 percent more. Sadness devalues one's sense of self, explains Lerner. The urge to pay more may be an attempt to elevate your own worth.

Maybe it's karma: The mall has been blamed for killing America's main streets, stealing business away from mom-and-pop shops. But now malls themselves may be on the endangered list. In April General Growth Properties, which owns or manages more than 200 malls, filed for bankruptcy, and retail analyst Burt Flickinger III, managing director of the Strategic Resource Group in New York, predicts that up to 3,000 will close in 2009.

But with so many of us now depending on these places to socialize, de-stress, even exercise, what can we do when the local mall is shuttered? Mary Gresham, Ph.D., a clinical psychologist in Atlanta, suggests several alternatives. "When people shop, they almost go into a trance, a pleasurable state in which they lose their sense of time and are oblivious to other things," she says. But crafts -- knitting, jewelry making, and quilting -- create a similar response. And you still end up with a new material good.

"Our ability to fight temptation weakens, almost as if we get tired," says Duke's Dan Ariely. After engaging in activities that require willpower, you won't have as much energy left for other challenges, explains Kathleen D. Vohs, Ph.D., assistant professor of marketing at the University of Minnesota. So if you're using every ounce of discipline at the food court because you're on a diet, or you're trying to quit smoking, you'll be less able to pass up a pair of pumps in a display window.

Although Vohs says there's no easy way to build self-control, she suggests practicing it in small doses: Try sitting up straight, using your nondominant hand, and not swearing for a week. "I'm not willing to bet the farm," she says, "but we've seen small improvements." Oprah.com: 4 things to think about before you say "I'll take that it."