(CNN) -- Ashly Covington is the kind of top model who doesn't lift a finger. She doesn't cook, she doesn't clean and she avoids anything that could ruin her manicure. 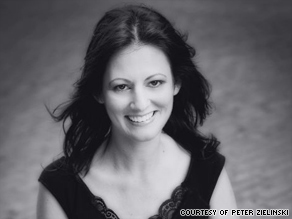 But if your hands could earn $1,200 in a day, you'd think twice before scrubbing down the bathroom, too.

As one of the few full-time body parts models, Covington thinks about her hands "every minute of every hour of every day," because for the past seven years, her hands (and, occasionally, her legs and feet) have been her sole source of income. She can earn anywhere from $300 a day to a couple thousand per hour.

"Most people can walk away from work when they're done with a job, but parts models can't, because [our parts] have to be flawless. I moisturize 20 to 30 times a day, and wear gloves 90 percent of the time," she said. "When it's your livelihood, you've got to think hands first."

Parts modeling was ushered into the public's conscious with the "Seinfeld" episode when George Costanza became a hand model, but the specialty is still the oddball of the fashion and advertising industry.

See other famous faces behind the hands »

With all of the reality TV showing what it takes to prance the runways, none depict the truth about being a parts model. There's the discomfort of contorting one's hand in an uncomfortable position for hours, or attempts to "smile" with one's feet.

"Some people have a very romanticized view of what [parts] modeling is," said Danielle Korwin, president of the New York City-based Parts Models modeling agency. "Their boyfriend or grandmother or mother has said, 'you have great hands, you should be a model,' but we want only the exceptional. Your hands have to be veinless, poreless and flawless."

Covington believes hand modeling may be harder to break into than other kinds. Even if you have gorgeous hands, Covington said, that doesn't mean they photograph well. "You have to know how to hold the hand so it looks beautiful."

As a result, parts models have to do what seems like the near impossible: "Your hands have to convey emotion," Covington said, whose background in drama serves her well.

"I was doing a shoot where I had to pick up a cheeseburger and bring it to camera, but they wanted it to be the most delectable cheeseburger," Covington said. "So I said 'mmmm,' and really conveyed the emotion entirely to get it reflected in my hands."

Hand model James Furino, who's played the hands of famous leading men like Matthew Perry on "Friends" and Daniel Craig for a "James Bond" promotion, and has also landed print advertisements for clients like Smirnoff Vodka, said those gigs can be a lot of pressure.

"They spend hundreds of thousands of dollars in pre-production and people are flying in all over the country so you can get to that exact moment where you split a muffin, and it's [on] you," he said.

Newcomer Jivelle Callender agreed that parts modeling for TV spots can be "nerve-wracking."

"You're standing in the middle of a large group of people who are very close on top of you, and the attention is fully focused on your hands," she said. "But your hands are not the star, the product is the star. Depending on what you're doing, some shoots are very involved -- dipping a shrimp, for example. It's one thing to just dip a shrimp, but it's quite another thing to do it on camera to make sure the shrimp looks spectacular."

You have to wonder where the glory is when a person's camera time is lessened in favor of a few crustaceans.

"I love sets; I love working with the camera crew and the director," Callender said, who also does print work for companies like Nordstrom as well. "It's nice to see my hand in the commercial, but I don't care if people know that it's me or not."

Covington's hands have been everywhere from Hamilton Beach clothing iron boxes to NuvaRing birth control ads, and have even starred in that inescapable Dawn dish liquid commercial featuring a purple, Spanish-speaking sponge.

"I've had some of my mom's friends say, 'When will it be your face?' But I'm not trying for that. I'm really proud of all the places that my hands have been. I think it's neat that everyone in the world has seen my hands and nobody knows it," Covington said.

Yet Kimbra Hickey proved the life of hand model can be moved out of the shadows when she became the cover art hand model for the novel "Twilight" five years ago.

"I just stumbled on it. I've never been recognized as a hand model, but when I started going to bookstores and telling people who were in line paying for 'Twilight' that those were my hands, before you know it, I had a line of people waiting for autographs."

Hickey is now touring with various "Twilight" themed conventions, autographing covers and recreating her now-famous hand pose for photos with fans. "When you start to realize that you have this little bit of celebrity status, it's a strange feeling, because I've never had that before," Hickey said. "I feel lucky just to be a part of it."

But anyone toying with the idea of becoming a parts model shouldn't do it because of illusions of fortune and fame.

"It seems people think we all live like supermodels and rockstars," Hickey said, "but it's really just a regular job."

Furino agreed. "If you want to do this for 10 years, you may finally be able to make a living," he said. "But get rich quick? If that was the case, everyone would be doing it."

His advice if you do want to pursue parts? "If it does start working for you, keep going, but don't quit your day job just yet."

All About Models and Modeling