The two kinds of single women

(The Frisky) -- In January, I left a live-in relationship after three years. The experience was all the sad adjectives you can imagine. But after the sobbing spells and the heavy drinking, the fog lifted -- I was finally single again for the first time since after I graduated college. 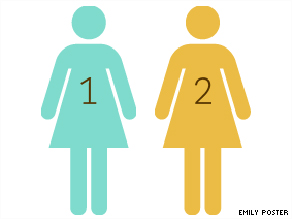 Newly single woman finds out there are two kids of single females.

Naturally, I expected my single friends to react with equal doses of giddy glee. For the record, I'm not the kind of girl who ditches my ladies when I'm dating someone. But lots of time does free up when you become single.

As for my coupled-up chums, I expected sad stares. They probably thought I was doomed for spinsterhood after leaving my longest relationship at age 27.

"But don't you want to get married and have kids?" I imagined them asking. When I'd respond, "Not right now," they'd ignore me and say, "I know someone who'd be perfect for you!"

But that didn't happen. My taken gals were as supportive as my sturdiest Victoria's Secret bra.

"I don't worry about you," my best friend, who is getting hitched next summer, affirmed.

"You'll be fine, alone or with someone."

I wiped my brow -- my attached amigas didn't consider my newfound singleness a contagious disease! So obviously, I thought the single ones would feel the same. The Frisky: All my friends are getting married -- I'm not even close

That's when I learned that there are two kinds of single girl. The first kind is independent, secure and just as content to sit at home with Netflix as she is to go out on a date. The other kind is always moaning about being alone and plotting which guy to go after just like an Army general preparing for battle. The Frisky: Why women women need to shut up and get over it

Unfortunately, some of my single friends fell into that second category.

At a bar one night, a guy gave me his digits. I wasn't that interested, but took them anyway. My friend said, "You better call him, because in a few years, no one will be giving you their numbers anymore."

Ouch. What did that mean?

Another single friend told me she'd feel "defeated" if she were me. Ouch again. Did I suck at life because I'd decided I'd rather be alone than with the wrong person? The Frisky: Why I'm happy to be single (for now)

A few weeks later, another pal, totally unprompted, said, "You should get on Match.com. Just to have more options."

"Umm, thanks, but I haven't been single that long," I replied, taking a mighty swig of beer. The Frisky: How to go to a bar alone

"Well, it's just that the pool gets smaller as you get older," she said. What the hell?

Being in a vulnerable post-breakup state, for a while I let these comments sting. But almost six months later, I've learned to ignore them because they don't apply to me -- they apply to the people saying them. Misery does indeed love company.

Now I'm happy to say I'm spending my time with family and happy friends, traveling and just being me. You know what I'm not doing? Stressing about being alone. I'm not that kind of single girl. The Frisky: 20 things every woman should do before she gets married

1. Don't take things bitter friends say to heart. They're projecting -- putting their insecurities on you.

2. Don't chat with negative friends about your love life (or lack there of).

3. Don't feel forced to date because your friends are.

4. Do go out with supportive friends of all relationship statuses.

5. Do enjoy you. That's the only person you'll definitely be with forever.