My 'flaw' is my trademark

(OPRAH.com) -- The closest I ever came to finding out what it would be like to have gigantic breasts was when I met the producer of a documentary film celebrating women with gappy teeth. 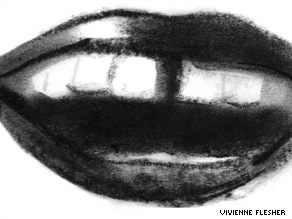 When I smiled, his eyes popped like a Looney Tunes character's. For the rest of the conversation, they never left my mouth. I felt so exposed: If a shapeless sweater for teeth existed, I would have put it on.

In some cultures, gap teeth are considered the apex of female beauty, a sign of sexual appetite or God's favor. In this culture, I'd be lucky to be cast as an extra on a remake of The Beverly Hillbillies.

I never really minded, though, until early in my marriage when my husband -- the love of my life, the guy who promised to cleave to me until death do us part (or perhaps longer, since we were married by a Buddhist priest) -- glanced up while I was gnawing on a lamb chop and said, "How do you chew with those things?" Oprah.com: What you should say about a friend's appearance

The inside of my mouth instantly joined my jiggly upper arms, jelly belly, and pancake ass on the list of things that I would change about myself if I had a magic wand or a spare hundred thou.

Since then, though, fixing your teeth has gotten easier, safer, and cheaper. There are lasers, veneers, whiteners, bonding. No longer do dentists grind otherwise good teeth to nubs to slap on crowns, sacrificing oral health for good looks. What could it hurt to check out the possibilities? After all, I highlight my hair. I wear contact lenses. I don't leave the house without mascara. How different was it, really, to fix my smile?

My dentist, who doesn't do cosmetics, recommended two colleagues. The first called himself the Transcendentist and promised an office environment "similar to a yoga studio."

I chose the other one, a former UCLA basketball player named Derric DesMarteau who is mouth guy to the Oakland Raiders, the Golden State Warriors, and a bevy of college athletes whose teeth meet regularly with the floorboards. His office was festooned with game balls and signed jerseys, autographed shots of Raiderettes cheerleaders, and pictures of him with Magic Johnson and Tom Hanks.

And smiles. Lots and lots of smiles. Head shots of pretty people with near-phosphorescent teeth. Suddenly my steady diet of coffee, cola, and dark chocolate seemed a bad idea.

I smiled through closed lips when Dr. DesMarteau came out to meet me. A good-looking guy, with a tan, craggy face, and spiky, subtly highlighted hair, he didn't flash a lot of enamel himself. I asked him to open wide so I could take a peek. His teeth were white, but not creepy. I was satisfied. Oprah.com: Confessions of a plastic surgeon's wife

Once I'd settled into the world's most comfortable dentist chair, he snapped a quick digital photo of my mouth, projected it onto a TV screen, and asked, "What do you like about your smile?"

I drew a blank. Wasn't this supposed to be about what I didn't like? "Um, the shade of my lipstick?" He nodded encouragingly. I tried again: "That it's friendly?"

He recommended bonding my gap -- building up my front teeth using layers of resin hardened with ultraviolet light. It's not as permanent as, say, veneers (at best it lasts ten years), but at $700 per tooth, it's less than half the cost.

"I can do a quick temporary, if you'd like," he offered. I held up a mirror while he brushed a pastelike substance onto my teeth. Five slightly maple-tasting minutes later, he took another snapshot. He even digitally whitened them a little. No question, my teeth looked much better. They looked...normal. What they did not look like, however, was mine. And I couldn't decide whether that was an improvement.

I went home and spent the afternoon alternately dashing to the mirror and poring over the before and after photos. Did I like the look? Was it me?

When my husband walked in the door, I grinned at him. "Notice anything?"

He looked me up and down. "You cut your hair?"

He squinted at my mouth. "What did you do to your teeth?"

I turned my head side to side. "Like it?"

He stared for a moment. "I don't know," he said dubiously.

I popped the resin out. "It's just temporary."

He looked relieved. "Good," he said. "I like your little gappy teeth. They've got personality." Oprah.com: Why self-esteem can spread like crazy

I smiled. And this time my smile was authentic: uneven, gappy, and stained, but mine. Honestly? I thought I'd go for the bonding. I assumed I'd look better with normal teeth, and $1,400 wasn't such an astronomical sum to pay for that privilege.

It turns out, though, that my teeth are a trademark, one of those necessary imperfections that makes a person unique. And I'm content with that.

I just wish I could say the same about my drooping eyelids.

By Peggy Orenstein from O, The Oprah Magazine © 2009

Peggy Orenstein is the author of the memoir "Waiting for Daisy."