Why you should always trust your gut

(The Frisky) -- How many times have you been out with a foxy new someone only to have him do or say something that made your stomach lurch -- and not in an I-wanna-make-babies-with-him-now way. Maybe he was nasty to your waiter. Perhaps it was more subtle --he snickered when you tripped or didn't introduce you to the attractive "friend" you ran into. 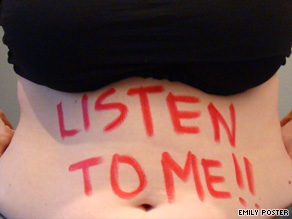 Then again, maybe there was nothing you could articulate, but he just felt off. How many times have you ignored that feeling?

I was in the midst of a very long dry spell when my buddy Don offered to fix me up with his friend Robbie. According to Don, Robbie was employed, funny, and somewhat attractive. As I hadn't so much as kissed a guy in months, I said yes.

Robbie called almost immediately. He was charming and hilarious and we made a plan to go out the following week. I was surprised when he called the next night, but happy to hear from him.

I explained I was on my way out the door. He'd had a terrible day at work and wanted to discuss it. First he tried cajoling me into blowing off my friends so we could talk, and when that didn't work, he flipped out and hung up on me.

I was put off, but when he called the next night, full of apologies, explanations, flattery and more apologies, I cautiously agreed to keep our date.

Security expert Gavin DeBecker's "The Gift of Fear" talks about the "brilliant internal guardian" that warns you away from potentially violent situations and people. His premise is that you should always listen to what your gut is telling you.

In fact, according to a recent story in New Scientist, "it turns out that because our emotions emerge from our unconscious mind, from our internal supercomputer, they tend to reflect more information than our rational mind." Translation: our gut instinct can save us from a lot of grief. The Frisky: Breakup lessons

So why do so many of us ignore our guts? After being burned by several bad relationships, Jenny, a pretty, petite, rock guitarist told me, "I always listened to my sexual urges, which is probably why, now I'm without sex -- because I've learned to listen to my gut and my brain." The Frisky: Closure from heartbreak can be bittersweet

Jenny's personal worst was when she moved to the other side of the country for someone she barely knew.

"I knew halfway across the country that it was the wrong decision." So why did she slog westward, even though her gut was screaming no? "I was more worried about him than I was myself; even though I knew I was putting myself into a bad situation by doing so."

My good friend Jennifer allowed herself to be talked into believing her philandering boyfriend was actually faithful even though every fiber of her being told her otherwise.

"He said that he and his mother were concerned that I was crazy and they were going to get me help," she tells me. "It worked for a while -- I thought I was being jealous and possessive."

The fact that he drew his mom into the equation somehow made it seem more legit, but when Jenny walked in on him kissing another woman that all fell by the wayside. "It turned out that he was sleeping with half my friends." The Frisky: Cheating cover up worse than the crime? --

As for Robbie and myself? Though our time together was blessedly brief, it was one of the most hellacious relationships I've ever put myself through. The only thing I took away from it was the knowledge that the next time my gut twists itself into a Cirque du Soleil-style contortion, I'm sprinting in the opposite direction as fast as my feet will carry me. The Frisky: Signs that a relationship is over