9 ways to keep your marriage healthy

First comes love, then comes marriage, then comes decades of time together strewn with a minefield of potential relationship wreckers. It's a wonder that anyone ends up walking off into the sunset, hand-in-wrinkled-hand, with a silver-haired mate. What do those geriatric lovebirds know that you don't? 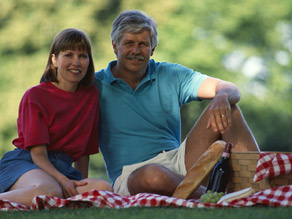 Some experts suggest that couples who exercise more frequently tend to have better sex lives.

Well, the truth is that even in so-called happy marriages, both partners probably fantasize some of the time -- or even much of the time -- about throwing in the towel.

A new Woman's Day and AOL Living poll found that a shocking 72 percent of women surveyed have considered leaving their husbands at some point. But despite the occasional rocky patch, 71 percent expected to be with their husbands for the rest of their lives. So how do you make it to the finish line with your relationship intact?

Each decade will have its own drama, be it child-rearing, layoffs, second careers, and middle-aged angst, along with a big helping of the in-sickness-and-in-health stuff. Here's how to have a healthy relationship every step of the way.

Now that you're married, you can finally relax and skip the gym, right? Wrong. Wedded couples tend to have fatter waistlines, which can spell trouble in terms of sexual attraction and general health.

A 2007 study published in the New England Journal of Medicine found that your chances of becoming obese increase by 37 percent if your spouse becomes obese. So unless you want "till death do us part" to include chronic health issues like heart disease and diabetes, it's important to establish healthy eating habits early on.

But warding off weight gain isn't as simple as whipping up a healthy meal together. Eating with anyone -- from your spouse to coworker -- can cause you to consume 33 percent more than you would solo.

Being aware of the potential fatty pitfalls of marital bliss may be enough to keep your portion sizes in check. Spend couple time checking out local farmers' markets on the weekends in an effort to consumer fresher, low-calorie fare. Or schedule an exercise date to work off some of your hearty, homemade dinners.

2. Have a financial plan

Nearly 40 percent of married people admit to lying to their spouse about a purchase, according to a 2004 poll, and money woes can quickly send your marriage south. In fact, money is the number-one reason couples fight, and relationships tend to suffer during poor economies. You should discuss and agree upon some hard financial ground rules, preferably before you tie the knot.

Don't fret if you're a spendthrift and your partner pinches pennies.

"It's probably not a good thing to have the exact same philosophy about money, " says Ken Robbins, M.D., a clinical professor of psychology at the University of Wisconsin--Madison. "But financial issues are best to resolve early on. You want to decide who is going to pay the bills, how much discretionary spending is reasonable, and how you're going to keep track of it all."

3. Figure out your family rules

Couples spend the first 5 to 10 years of their marriage butting heads over how their family should work, says Dr. Robbins.

"People often don't realize that they come into a marriage with an idea of how a family works based on their own family -- whether they liked them or not," he adds.

You can end up fighting over something as trivial as how you should hang your toilet paper, but those little issues can add up to big problems, particularly if children enter the picture. A 2004 study found that how a couple manages parenting responsibilities when the child is an infant is associated with the quality of their marriage two-and-a-half years later.

You and your partner may have vastly different ideas about how a child should be cared for and what constitutes family together time. If one of you is working, should the other partner get up with the baby at night, or should you take turns? Is it important for you to sit down to dinner as a family every night? "You need to figure out how you can live together happily while each maintaining your own sense of self," says Dr. Robbins.

While you should make sex a priority, you shouldn't pencil it in on your planner. If you schedule sex, it becomes a responsibility --just like taking out the trash, says Andrew Goldstein, M.D., an obstetrician and gynecologist at the Johns Hopkins School of Medicine, in Baltimore, and the coauthor of "Reclaiming Desire."

The average married couple has sex 58 times per year, or slightly more than once a week. And a recent eight-year study found that 90 percent of couples experienced a decrease in marital satisfaction after the birth of their first child. Yikes! Health.com: How to bust your bedroom routine

But it doesn't matter whether you're having sex five times a week or five times a year -- as long as both of you are happy, says Dr. Goldstein. In fact, a 2008 study found that couples who reported any kind of marital intimacy -- everything from holding hands to sex -- exhibited lower levels of a hormone produced by stress.

Whatever financial and household arrangements you agreed to in your 20s or 30s, chances are they're going to change at some point in your marriage. Men account for 82 percent of recent job losses during this recession, meaning couples are making some hard choices when it comes to both their careers and their checking accounts.

If the traditional breadwinner is laid off, the stay-at-home parent may need to head back into the workforce. Conversely, if you become a stay-at-home partner -- due to choice or circumstance -- expect to do more of the shopping, cleaning, and other chores that make a household run smoothly. A recent analysis of government data found that employed women spend significantly more time on child care and housework than employed men -- and unemployed men.

Having an open discussion of how household duties need to change can help couples weather some tough transitions. "Everyone has a role within the relationship and as long as there's a greater good, it's not a question about whether it's his money or her money," says Dr. Goldstein. "It's their money. Your paycheck and your career are not the value of your worth."

6. Stay active as you age

If you're like most American couples, you don't exercise or you stopped regularly exercising when you had children. Try to find new ways to stay active as a couple, whether it's hitting the tennis courts or hiking trails. A 1995 study found that couples who work out together are more likely to stick with an exercise program. And some experts suggest that couples who exercise more frequently tend to have better sex lives.

Pick up a life sport that you can enjoy together for decades to come, like golf, tennis, or hiking. You don't need to be seriously sweating to reap the benefits of regular exercise. Experts say that moderate exercise is enough to help stave off heart disease and other ailments.

In the last decade, researchers have noted a rise in "gray divorce," or couples over 50 who are calling it quits. While it's tempting -- and often prudent -- to keep couple conversations behind closed doors, you may actually benefit from blabbing to a close friend.

"It's often helpful to talk to couple friends when these big issues come up," says Dr. Robbins. "Many couples live very privately and discuss these issues with the shades down, but relationship issues like this can often benefit from hearing how people that you trust dealt with a similar situation."

Whether it's hearing how a friend dealt with her husband's infidelity or other big hurdles, a little empathy can put things in perspective. But keep your gabbing under control. Health.com: Myths about safe sex and sexual health

"Clearly it's never a good idea to say anything -- even to a close friend -- that you wouldn't want repeated back to your spouse in five years," warns Dr. Goldstein.

8. Rediscover each other as a couple, sans kids

Forget empty nest syndrome -- a 2008 study found that marital satisfaction actually improves once children leave home. Female participants reported spending equal amounts of time with their partners both while their children lived at home and after, but they noted that the quality of that together time was better once the kids were out of the picture.

"Suddenly the tyranny of the children controlling the household is relieved," says Dr. Robbins. "You don't have to have dinner at 6, you don't have to spend Saturdays at the soccer field, and you don't have to be so responsible all the time." Use this newfound freedom to bend the rules a bit and rediscover what you love about each other.

But if marital problems have already been bubbling, an empty nest can reveal serious tension. "All of a sudden the noise is gone," says Dr. Robbins. "If you didn't have much to talk about, it suddenly becomes more apparent once the kids are gone."

9. Be a conscious caregiver

In the event of a serious illness, spouses who assume the role of caregiver often develop a sense of "caregiver burden" and may become ill themselves. So it's vital that both spouses ask for help when they need it. Getting out to see friends and socialize is particularly important for caregivers. And realize that you both have limitations.

"The spouse who needs help typically feels guilty and frustrated. The spouse who has to help feels controlled by it," says Dr. Robbins. "While you can't fix those issues, you at least need to be open about them."