Adopted by a man who used to date my mom

By Kate Simonson with Meghan Daum

(REAL SIMPLE) -- The summers of my youth were filled with the kinds of activities that were common to every kid in the 80s but are considered almost death-defying these days: tree climbing, bike riding without a helmet, and daylong road trips spent in the backseat of the family car, where we bounced around like Super Balls, nary a seat belt in sight. 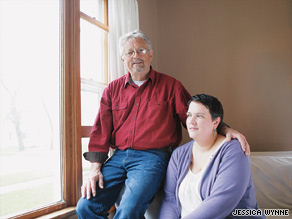 Kate Simonson and her dad, Mike Fieseler, at her home in Iowa.

Still, my mother was safety-obsessed about some things, like swimming lessons. Year after year, she forced me to take them at our local pool in Iowa City. Having to go against my will seemed all the more unfair to me, since my mother could not swim and was actually afraid of the water.

But my mother reasoned that if water came between her children and their safety, she would be helpless.

"I can't save you," she would calmly state in answer to my pleas to bow out of the lessons. "So I'm going to do everything in my power to make sure you can save yourself." Real Simple: Mother-daughter relationships

It's no wonder she embraced this philosophy of self-reliance. She knew how unexpectedly life can rob you of someone you care about. My parents adopted me as an infant and went on to have a biological child -- my brother, Jason -- a couple of years later.

My dad was an electrician, and he died in an accident on the job when I was three. After his death, my mother had to raise us alone, and she was acutely aware that she was truly on her own, with no backup plan. She was fiercely strong and yet constantly fearful.

I have almost no memories of my father. Instead I remember Mike Fieseler. He was a former industrial-arts teacher whom my mother dated off and on for much of my childhood. Jason and I weren't his biggest fans. He was a man of strict rules, while my mom's approach could be more properly deemed overindulgent leniency. iReport.com: Share your bonding with dad memories

We resented having to share the spotlight with him -- a sentiment that was particularly strong every Christmas morning, when we had to wait for him to arrive before we could open gifts. (There is little a man can do to endear himself to children less than delaying Christmas-morning gratification.) And when they stopped dating, when I was 15, I wasn't unhappy to see him go. Real Simple: Small, helpful gestures with big impact

Then, on February 18, 1991, when I was 17, my mother suddenly died of a brain aneurysm. One minute she was laughing with friends, enjoying an evening out; the next, she was unconscious on the floor. She never woke up. Just 19 hours later, she was dead, leaving my 15-year-old brother and me orphans.

In the moments of shock and horror that followed, my relatives all gathered in the hospital, and I went home with only a close friend for company (Jason followed a while later). We spent that night on our own. I was numb; it had all happened so fast. I could barely think beyond the immediate moment.

The next morning, my grandfather, aunts, and uncles were still immersed in their own mourning. Shell-shocked as I was, I knew I had to let people know what had happened. I saw my mother's address book lying where she had set it only days before and started dialing. One of the phone numbers I found was Mike's.

Even though he lived about an hour away, it felt like he was there in an instant. As soon as he walked in, he took charge -- and took care of Jason and me. Among other small kindnesses, he gave me a credit card and said, "Why don't you buy something to wear to the funeral?" He gave me permission to be a 17-year-old -- to focus on the more mundane issue of what I was going to wear instead of weighty adult concerns. Real Simple: Father's Day gift ideas

Generally, when children are orphaned, a family member comes forward to take them in. This didn't happen in our case. Everyone had a good reason, I suppose. My mom's father was too old to assume responsibility for us; my mother's sister and her husband had three kids of their own and weren't able to take in any others; her other two siblings were both single and worked long hours. The guardian named in my mother's will was a babysitter that none of us had seen in 15 years.

But I can tell you this: Abandonment, even for very good reasons, feels awful. It was heartbreaking and terrifying to have lost the person we loved most and then to be set adrift.

Months passed and it felt like our relatives could offer no reassurances. The only news we got was that if Jason and I remained without a guardian, we would have to enter foster care. Our mother was gone, and there was nothing we could do to save ourselves.

And, once again, there was Mike. After the funeral, he was a constant presence. He made sure that food filled the cupboards, the bills were paid, and the lawn was mowed. (Mike's adult daughter, Linda, pitched in and took care of his house.) He made sure I went back to school even when it was the last thing I wanted to do. His overbearing personality -- the trait I had hated the most -- is what comforted me the most and got me through those difficult days.

Mike says that Linda came up with the idea to make his role with Jason and me official -- he could become our guardian. He was on board right away. Mike still says he never considered not doing it; caring for us was simply the right thing to do. One day he made us his offer. In a moment where the grief of loss and the pain of being unwanted threatened to capture my very breath, this man, whose only tie to us was having dated my mother, said he would be honored to take us in.

From that moment on, everything was different. His girlfriend, Patty, threw us a "guardian party" when the paperwork became official. It was just a small gathering, but it made us feel special. I received a key chain with my initials, and I remember thinking that the idea behind it was so lovely.

Over the years, Mike has become not merely a legal guardian but a real father to me. When I fell into depression in college, unable to get past thoughts of my mother and all I had lost, he was there to listen.

When my husband, Eric, and I bought our first house, Mike spent weekends installing insulation and repairing our gutters. He never wrote me off as a good, mature kid who could handle everything herself. He walked the line between trusting me and recognizing when I might need help. And what more could you want from a father than that?

His was an unconventional path to parenthood, to say the least. It is not by birth or adoption that I consider this man to be my father; it isn't even through his presence in my childhood. It is rather by sheer good luck on my part.

Before he made that generous offer, I felt as though I had lost my mooring and the waters were flooding in; afterward, I simply felt rescued. If my mother had taught me to be strong and depend on myself, Mike imparted his own lesson -- that the world will provide for you, even when you least expect it.

Eight years after Mike stepped forward, he walked me down the aisle. Four years after that, I gave birth to his first granddaughter, Emily Michl Simonson. (Mike's legal name is Michl.) The name is a reminder of my saved past and a promise for the future, and I hope one day Emily will see that as well. Because as much as I plan to teach her to swim (indeed, she's now six and enrolled in lessons), I also want her to know this: No matter how fast the waters rise, no matter how hard it may be to keep her head above the waves, someone will throw her a line.