(Parenting.com) -- One Mother's Day, I bought my wife what she had wanted for years -- a weeping cherry tree -- and I threw in a bird bath, so that when the tree matures, our feathered friends can happily splash and drink under its loving protection. 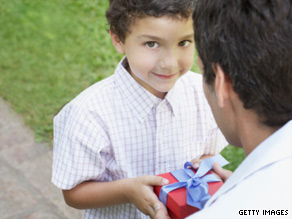 Oh boy! Another tie or pair of funny boxer shorts for Dad!

For Father's Day, my wife gave me some boxer shorts and a tiny reading light, so I can flip through a book in bed without disturbing her.

My wife is the first to admit it: For her, and for many people, Father's Day is an afterthought, a holiday just a few steps above the one that celebrates the groundhog and that other one that promotes trees.

If Mom's Day and Dad's Day were in a prize fight, we all know which holiday would wind up lying in the corner of the ring, knocked-out teeth on the mat, dazed head stuck in a bucket.

I've been thinking about how our society recognizes parents because Father's Day is upon us again, but also because, a while ago, my worst nightmare happened: My wife had to have surgery.

I was an emotional wreck. For a while, it was truly touch and go. Life hung in the balance, and everything near and dear to me seemed in doubt. Why? Because while Susan recovered from her toe surgery, I had to take care of the kids. Parenting.com: Work/family balance harder for men?

Sure, for a couple workdays I was able to call in reinforcements (my mom and mother-in-law), but an entire weekend lay ahead in which I was to be the prime caregiver to Lorelei, who was just hitting 6 months, and Isabelle, our 3-year-old. Meanwhile, my wife was upstairs in our bed, on painkillers and armed with her cell phone so that I was always just a speed dial away from doing her bidding.

This would be a weekend in which I couldn't do only the fun stuff -- like playing blocks and watching cartoons -- with the girls. I was obviously going to have to feed both of them (three times a day!), and I would have to tackle Herculean tasks like giving baths, changing all of the diapers, putting them both to bed, and even giving medicine to Lorelei, who had an ear infection.

Over the decades, standards for fathers have risen. If this were 1897 or even 1974, I could have coasted through the weekend, serving potato chips and cold cereal to Isabelle, and I would have brought the girls to my wife's bed for her to do the changing of the diapers. I could have skipped the baths. I could have ignored the dishes in the sink and the cat litter without a barrage of criticism.

As long as I managed to avoid the house catching on fire, and the girls didn't come down with malaria, at the end of the weekend, my family and friends would have laughed heartily at my mishaps, like they used to do in the last couple seconds of those 1970s and 1980s one-hour dramas (you know, after somebody made a joke and the shot went into freeze frame). Then my family and friends would have declared that I had done my best, and nobody would have cared that the bar had been set so low that a chipmunk could have done as well. Parenting.com: His way can be better than yours

But today's dads are different. We not only love our children, we're acutely aware that we have a responsibility to be the best parents we can be. When it counts, I think most fathers really give it their all -- which explains why the Saturday night of my Mr. Mom weekend, instead of ordering pizza, I served Isabelle a chicken casserole with pineapple as a side dish. Don't applaud -- the fruit came from a can, and the rest from a box with four steps. iReport.com: Share your best bonding moment with Dad

Still, I have to admit, I felt proud as the weekend wore on. I grew more confident in my parenting skills and even gave both girls a bath -- at the same time -- not once, but two nights in a row!

Just as I was ready to nominate myself for a Nobel Peace Prize, an Oscar, a Grammy -- surely I deserved some award -- I had an epiphany that brought me back down a few pegs. Parenting.com: Mommy skills that'll work on husbands

I was fixing a French dish I like to call poisson et pommes frites (um, fish sticks and fries), when I caught Anderson Cooper on CNN. He was in Baghdad, surrounded by American soldiers, saying he was exhausted and scared. Yet he warned the audience not to be too impressed with him. In a few days, he would fly home. The soldiers would remain at their posts.

Now, I'm not comparing our girls to Iraqi insurgents, but I do appreciate more than ever that mothers are usually the soldiers in the parenting battlefield. Even full-time working moms do more child-rearing than us dads, studies have repeatedly found. Fathers tend to play the part of the dashing news reporter, swooping into parenting duties just long enough to get our hands dirty. My wife deserves her weeping cherry tree. And like most moms, she is worthy of much more.

Yet I think we dads merit at least a little more than boxer shorts, soap-on-a-rope, and neckties. We don't get the good stuff because we're paying for the sins of our fathers, and our fathers' fathers. But these days, dads are changing diapers, warming bottles, and taking our kids to the park. We may not be where you want us yet, but we've evolved, and we're involved.

Just as much as the moms, we appreciate the cards, the praise, and being treated special on our day. So if any of you mothers now feel guilty enough to spring for a slightly nicer Father's Day gift -- say, a plasma TV with a 50-inch screen -- make sure it also has built-in speakers with surround-sound.