(Parenting.com) -- The other day I realized my living room carpet had disappeared. In its place was one big fruit-juice-, play-dough-, and hairball-stained mat. 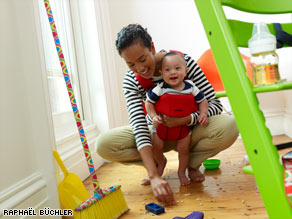 With babies in arms,sometimes not doing housework can be more loving.

"We never clean," I groaned to my husband.

"What are you talking about?" he said. "I vacuumed two weeks ago."

Like plenty of couples, Bill and I are proof that housework is one of the great marital divides -- up there with sex, money, and whether there's really such a color as chartreuse.

Sure, it can be easy to keep a home clean and serene before you're a parent. But after that, all bets are off. Almost half of couples with kids argue about cleaning, according to a national survey by the Soap and Detergent Association. We quarrel about when to clean, who should clean, and how to clean. And that's not even counting the fights we have about the other chores that keep a family going, from fixing dinner to fixing that leaky faucet.

"Housework is one of the top five things my husband and I argue about, because it has to be done on a daily basis and it's tiring," says Holly Taylor, an elementary school teacher and a mom of 3-year-old twins in Baltimore. "And there are times when neither of us has the oomph to do it." Parenting.com: How to drop the scorecard and work as a team

Finding that oomph is usually up to the mom, apparently. Although wives do half as much housework as those a generation ago, we still average 16 hours a week -- four times more than our husbands, according to a study from the University of Maryland.

These numbers are based on chores that, statistically speaking, both sexes like least: cooking, cleaning, and the like. (Both spouses spend several extra hours a week on such chores as yard work and pet care, which score much higher on the enjoyability meter.)

How can you induce your partner to do more of the dirty work? How can you break the cycle of toil-and-bicker in your own home? Here, some frank, parent-tested strategies:

"It helps if you both come to an agreement as to what your roles are going to be," says Teresa Elston, Ph.D., a family sociologist at the University of San Diego.

• Take a realistic look at how many hours you each work. Figure out who has the most time to get stuff done. The person who's around the most should, in all fairness, do more housework. This is how it works for Elston, who teaches part-time -- and that's okay with her. "I'm here more. If I were working full-time, I'd expect a much more even split." Her kids, Christa, 7, and Nicholas, 6, also help mop, scrub, and tidy. To motivate them, Elston blasts their favorite music on the stereo.

• Now write down which chores you feel are most important, have your husband do the same, and compare. If the lists are equitable, then anything you include that he doesn't could be your responsibility, and vice versa. The rest, the tasks you both consider necessary, are the ones you're going to have to divvy up. Some couples draw weekly chores from a fishbowl or assign them on a chart.

"On Fridays we'll write down all the stuff we were thinking of doing over the weekend and then make sure we both do some of it," says Lisa Vig of Mercer Island, Washington. Errands are on the list, along with laundry, making dinner for Saturday night, and fun activities with their 16-month-old son, Ross.

• If one spouse doesn't work, it makes sense that that person will do the lion's share of chores during the week, but on weekends there should be more equality. Caring for a house and the kids is a full-time job; the stay-at-home parent should get a break on Saturday and Sunday. Parenting.com: The sanest way to deal with clutter

Be patient with reluctant partners...

To get her husband, Jeremy Schwartz, to help out more at home, Merle Potchinsky of Willimantic, Connecticut, has tried the gamut. She's made sarcastic remarks. She's complained. She's even gone on strike.

"I put up signs all around the house -- 'I will not work!' -- and waited for him to come home. It wasn't necessarily productive, but it was funny -- even to him."

What is productive, she says, is "just being direct." She simply asks Schwartz to fix supper for the two of them and their 5-year-old daughter, Arielle, or to wash the dishes afterward.

"He'll do it if he's there and has the time -- especially if I say it in a nice, matter-of-fact way, because then it's just part of life and not an issue."

Mary Sanders, a mother of two, posts "honey do" lists of chores for her husband, Stephen, to tackle around their San Antonio, Texas, home. "She used to say, 'Here are five things I want you to do.' I hated that," says Stephen. But with the list, he feels less like she's nagging or ordering him around. "And we get to enjoy time with each other and the boys without worrying about things we have to do."

Another silent but effective approach that Mary uses: "If I simply put the laundry in front of him, he'll help fold it."

If your spouse has never folded your child's clothes or made a grocery list before, he might pull the old "This is too complicated for me." (My husband, a professor who keeps track of hundreds of students, claims he can't remember which drawer our son's pajamas go in.) Just stay firm and encouraging.

"I had to show my husband, Jim, how to load a dishwasher and do laundry. I started with one or two tasks a week, like changing the kids' sheets. Then I progressed," says Holly Taylor. Jim says he appreciates her pointers -- especially if she gives them on weekends, when he can focus on them. Parenting.com: Less work, more play

...And with forgetful ones

For many women, it's not a husband's lack of skill or enthusiasm for the work that bugs us -- it's that we always seem to be the ones who think of doing it in the first place. Why, we wonder, doesn't he ever remember that the kids need doctor appointments or that the newspaper has to be canceled before vacation or that the shower is actually part of the bathroom and needs to be cleaned with the rest of it?

Theories on this problem range from benign ignorance to deliberate blindness. Either way, it's best not to let resentment about it build. If you gently tell your spouse how much you'd appreciate not having to issue reminders, he may be happy to oblige.

Play to each of your strengths

Perhaps, like Teresa Elston, you're married to a vacuuming whiz, while you actually enjoy washing the car. Or maybe, like Lisa Vig, you take out the trash and your husband does the mending. "Lee is downstairs right now, reattaching a leg to a toy elephant," says Vig. "He sews buttons on too, and fixes holes in socks."

Ideally, a she/he split could work for many chores, with each of you doing what you like. As for those things neither of you enjoys -- is there a person alive who finds scooping out the litter box an uplifting experience? -- try to take turns.

Or you could let unpleasant jobs count more than others. There are some I hate so much (cleaning the diaper pail, say) that when Bill does them, I give him a free pass for the rest of the day, no matter how much time I spend cleaning or cooking. In my book, a lemon-fresh pail is worth at least as much as lemon-sauced sole.

Once, I'm ashamed to say, I griped about the way he'd scrubbed out that pail. Never again. As countless friends have since warned me, telling your spouse that he screwed up is bound to spark resentment and make him less willing to tackle it again. Their advice: Let it go.

If you think your spouse repeatedly falls short in the housework department, consider the possibility that your standards are too high. (Or that he's purposely burning the mac and cheese so you won't make him cook anymore. But let's not go there. It's more productive -- not to mention kinder -- to assume the best about each other.)

"Many women become territorial about the way housework is done," Elston says. "Men get put off. They think, 'I'll never get it right.' You do have to become more flexible about how things are done if you want your partner to participate more. You have to appreciate that he has his own ideas, and there's more than one way to load a dishwasher."

And if you still can't stand his sloppy loading one more minute? Suggest a chore you're less picky about. Or give diplomacy a shot.

"I'll say, 'Jim, I really appreciate this. You really did a nice job.' Then I say, 'Next time could you add this or change that?'" says Holly Taylor. "It's like when I write report cards -- you always put something positive first." Says Jim: "When she does that, it makes me feel a whole lot better than when she just gives orders."

Even when you're not trying to sugarcoat criticism, a little gratitude goes a long way. Try a heartfelt thank-you or "the counter looks great" -- it can only make him more willing to do his share. Better still, he might just compliment you back.

Another sanity saver, perhaps the smartest of all, is to quit trying for the House Beautiful look -- and go more for National Wildlife instead. Let the dust bunnies roam awhile (unless you have allergies). Forget about washing windows until the tiny handprints really obstruct your view. Leave toys out overnight; the kids will just rescatter them in the morning anyway.

"Since we've become parents, we've accepted that the house is going to be a bit messy, and we're not going to freak out about it," says Barbara Levison, a mom of two daughters, ages 2 and 6, in Sarasota, Florida.

Of course, "don't stress about the mess" can be a tough motto to adopt, especially if you're convinced that everyone else's house is cleaner or you feel, deep down, that doing housework is a way to show your family you care.

But as Lisa Vig learned soon after her son was born, not doing housework can be even more loving.

"I was on maternity leave and running around trying to get the clothes washed and this and that, and I was just exhausted," she says. "Finally, it dawned on me that I needed to stop and focus on the baby. I realized, 'This is the only time I have to really be with him, and here I am, matching socks!'"

Remembering what's important -- your child, your relationship with your husband, the quantity and quality of the time you spend together -- is what really matters in the end. Tonight, when I go into my living room, I plan to keep the lights dim and the music soft. Then, instead of arguing about whose turn it is to clean the carpet, maybe my husband and I can dance on it instead.