(OPRAH.COM) -- Manhattan's wealthier citizens had decamped for their summer homes, leaving the rest of us with room to breathe and stroll and enjoy summer in the greatest city in the world. 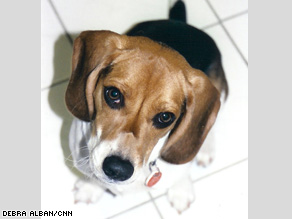 How could anyone not fall in love with Benny's big brown beagle eyes?

Some friends and I, Italian pastries in hand, parked ourselves on the steps of a brownstone where we observed the passing parade.

A perfect New York evening until, coming through the East Village gloaming, he arrived; cunningly small, his coat an unusual, glossy dark gray, almost hematite in color. He playfully sniffed at us, treating us as no more sentient than the stoop upon which we were sitting.

It was finally his probing at the wax-papered sfogliatelle in our hands that prompted a response from his owner.

"Milo!" she said, her voice swoopy with mock scolding. "You know you can't eat sugar."

Milo's infraction, it seems, was strictly personal, dietary, and adorable.

There was no "please excuse my dog for nuzzling your food with his nose, a wet appendage that was only moments ago exploring God knows what on the sidewalk and more than likely the backside of some other dog not long before that."

The thought probably never even crossed her mind. Indeed, Milo was allowed to continue to tarry, tangled among our ankles (and dessert) as unhurried as a Butoh dancer.

It was only when my friend Rory pointed out -- with a friendly chuckle, it should be noted -- that Milo "might have found the only four New Yorkers who don't love dogs," that his owner pulled her beloved terrier away in protective haste while casting a look in Rory's direction that one might best reserve for the inappropriate slattern who shows up at the Vatican in a tube top with a pentagram Sharpie'd on her stomach.

Lest you think I'm one of those injustice-collecting urban paranoids with a tinfoil hat and a plastic bag containing a brisket and a manifesto in tiny handwriting, a New York crazy who has a problem with everybody and everything, I should mention that I grew up with -- and adored -- a dog of my very own. Oprah.com: 5 ways a pet can improve your life

A lemon beagle named Hecuba. As channeled by my father -- who kept up a running monologue of her voice throughout my childhood -- she was less stalwart Queen of Troy than lovable Lucy Ricardo: unfailingly devoted, endearingly clueless (surely every family trip taken without her was nothing more than forgetfulness on our part), and charmingly flatulent.

Her death was wrenching, and even now, more than three decades since her passing, when I see a beagle, I melt. I absolutely know and appreciate what it is to love a dog.

But I also understand that when I say that Hecuba was the best, the sweetest dog who ever lived, it would never occur to me to expect someone else to feel that way about her. Oprah.com: Is your dog making you sick?

Why, then, am I continuously asked to be an ardent suitor in others' love affairs with their animals? And why does my resistance to do so put me on a continuum of sociopathy somewhere between Bernie Madoff and Hannibal Lecter?

It's the false moral component behind blind animal love that so frosts me. The faulty logic that believes that the capacity to adore a nonhuman creature is somehow a purer form of love. Just try pointing out that a relationship with a creature that cannot challenge you, that does not make you slog daily through the necessary compromise, debate, and occasional pitched battle, might be something less than deep and nuanced, and see where it gets you.

By the same token, displays of evident affection on their parts and extraordinary tales of the conscience and loyalty of Balto, for example, or the miraculous intelligence of Alex the African gray notwithstanding, most nonhuman animals don't really feel the same way about us. Oprah.com: 5 cat myths--busted!

If they did, you'd overhear a lot more "I'm really pissed off at what you said before about me getting fat and how Alice Munro writes the same book over and over. So no, I don't want to get the ball" in the nation's dog runs.

I had occasion a few years back to appear on a late-night talk show with a chimpanzee (long story, never mind). As he held my hand in his own warm, hairy dry palm, I really was overwhelmed with a rush of lovelike symptoms. The chimp seemed unbearably sweet, and wearing a pair of diapers to prevent any on-set accidents only made him more so.

Still, I demurred when the trainer asked me if I wanted to step up our level of physical contact and actually dandle him in my arms. It's not that I wasn't tempted. I was immediately taken in by those empathetic brown eyes surrounded by benevolent wrinkles.

What I was feeling was the same complex firing of neurons and synapses that ascribe human emotion to the furry, the liquid eyed, the infantile. Disney and his team of animators figured this out long ago (I still can't watch the scene where Dumbo visits his incarcerated mother).

But I could not rid myself of the fear (completely well-founded, as it turns out, given the recent stories of chimps in the news) that he might at that moment revert -- as is his right as an animal -- to his dominance-seeking nature and decide to tear my face from my skull. My desire to cradle this clingy, warm-thoraxed being in my arms was triggered because he so reminded me of a toddler. Get it? A human child. The kind of creature who might grow up to become an oncologist, a public school teacher, or yes, even a Grand Theft Auto--playing, Mom's-basement-dwelling disappointment.

Not far from my apartment, within a stretch of no more than 500 feet, there are two doggie gyms where Gotham's canines who aren't getting enough exercise running through the city's parks, or are neglecting their all-important doggie glutes and abs, can go for a workout. What can I say? This appalls me.

But do I wish these Gilded Age inanities ill? Quite the contrary. I hope they stay open and prosper, but only to the extent that they provide jobs for folks who need them. It's not a contradiction. It's not even a paradox. I have no problem with animals, I just like people more.

David Rakoff is the author, most recently, of the book "Don't Get Too Comfortable."