(Parenting.com) -- It's nearly impossible to explain to the uninitiated the enormousness of parenthood, the all-encompassing giganticness of sharing your home with a baby. 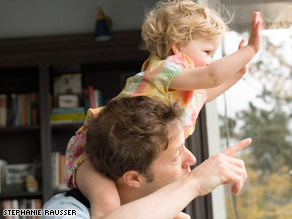 One father didn't let his new baby slow him down. He would strap him to his chest and take him to a ball game.

And unlike moms, who to some extent get to know the baby in utero, dads meet fatherhood with a head-on crash.

The volume of baby needs, accessories, unguents, lotions, and balms can be astonishing. Meanwhile, maybe his wife had a tough delivery and isn't yet fully on her feet, his friends aren't as charmed by the newborn as he'd hoped, and he hasn't had a nutritionally square meal in weeks.

He's not even sure he feels love for the wee one. The kid can't smile or say, "I love you, Daddy." It can't play catch. All it can do is cry.

It's a bit bleak, but only in the beginning. The hardest three months of parenthood are the first, often more so for dads, who are more reluctant to give up the way things were.

Eventually, though (infants wait for no man), dads do relinquish the past, especially with so much attention focused (rightfully) on mom and the baby. Here, some particularly bumpy adjustments that new fathers must make when the baby finally comes home.

Perhaps the biggest transformation your husband will face is his demotion in the household.

If he was once number one on your list, he is now number two. This is practical evolution: The baby can't fix herself dinner or get herself dressed. Dad can. His desires -- companionship and clean laundry -- are put on the back burner.

"I missed my wife," says Tomas Rossant of Brooklyn, New York, about the first few months after the birth of his elder son, Luca, now 3.

"She didn't have energy for me. The baby was tiring, and breastfeeding took a lot out of her. It's no wonder she didn't want to hear about my hard day at work when she'd been home alone with a colicky baby. Before Luca, we used to talk about our future, our thoughts and ideas. But after he was born, we talked about him. And only him."

Which means something's got to give: "When all you think about is the baby, your relationship gets left behind," says Dave Kushner, also of Brooklyn, and father of Samantha, 3, and Mia, 1.

"We had twins, so I didn't become second banana, I was third banana," says Michael Schaus of Greenwich, Connecticut, father of Caroline and Virginia, now 4. "That was to be expected. But the constant fighting with my wife was a surprise. I guess when you haven't slept longer than an hour and a half at a stretch for two weeks straight, you get on each other's nerves."

And with an infant in the house, the usual way husbands and wives make up after a bickerfest may be off-limits, unthinkable, or just plain old inconvenient.

"We started having sex again after six months, but it was a year before I touched her breasts," says Brian Feit of Owings Mills, Maryland, father of Trevor, 5, and Zoey, 2.

Schaus: "Five years out is our target for having sex again. I'm kidding. Kind of."

Since so often the tenderness and intimacy between new parents erode in the face of diaper-bin aromas, ointment-slicked hands, and wailing infants, it's not surprising that dozens of studies report a marked drop in marital satisfaction after the arrival of the first child.

That's why it's important for Dad to remind himself that some changes -- like the lack of sex -- are only temporary. And to try to immediately address any conflicts that erupt, before they grow too large.

If, however, your breasts shoot milk across the room during orgasm (yes, this can happen), laughter is the only appropriate response.

In the face of marital discord or neglect, men often turn to favorite activities and friends. But new time demands make out-of-home recreation and socializing hard to squeeze in. Parenting.com: Wife's friends have more say than me

Spontaneous invitations (as in "Two tickets to the Knicks game tonight just landed on my desk. Want to go?") are tempting but out of the question. Friends may feel rejected; Dad feels resentful. And no emotional support is flowing in.

"Let's put this in the proper context," says Rossant. "I didn't want to complain to my friends or cry to anyone. But I missed the companionship, making plans, doing stuff, going out for drinks. That was all gone."

Rossant says that postparenthood, his friends fell into four categories:

• Couples with kids who kept saying "I told you so"

"The couples who wanted kids saw us as their future. The couples who didn't quickly fell off the map," he says. "A few of my single friends really let me down, not coming to see the baby or sending a gift. I never thought this way before, but suddenly it was shocking that someone I thought was a good friend wouldn't send a gift. You can be sure I haven't forgotten that."

Some men, when faced with uninterested pals, just let them disappear. "The people we lost touch with either didn't like kids or weren't very close to us anyway," says Feit. "When time is precious, you spend it with people who matter. Having a child makes you see who your true friends are."

Dads need to understand that new parenthood is a very special cocoon, and it's not necessarily reasonable to expect everyone to crawl in with them.

Andrew Postman of New York City, father of Sam, 4, and Charlie, 2, was surprised to find that conversations with childless friends suddenly became stilted. "We quickly learned that every fabulous bowel movement wasn't going to be interesting to everyone," he says. Parenting.com: Dad's lament: I have no friends

Despite the natural shrinking of the pal pool, maintaining friendships is crucial to Daddy's well-being, of course. Ideally, you'll work out a split shift every once in a while -- Monday, Mom meets up with friends; Tuesday, Dad has a night off -- so each of you gets support and a chance to renew.

Postman remembers going out to play poker with his buddies when Sam was a few weeks old. "It felt good to go out and act like my prefather self," he says. "But after a short time, I found myself missing Sam and wanting to go home. That's when I knew I'd incorporated the change and really become a dad."

When you decide to become a parent, you realize that sacrifices will have to be made. It isn't until the baby shows up, though, that you understand which forfeitures you'll feel most.

Some are big: freedom, spontaneity, time. But other sacrifices still smart. Many dads mention the shock of missing hobbies, sports, going to concerts and movies, sleeping late, even reading the newspaper. Call them quality-of-life casualties.

"I put on thirty-five pounds in three months after my first child was born," says Everett DeMorier, a father of two and author of Crib Notes for the "First Year of Fatherhood: A Survival Guide for New Fathers."

"I had no time for any sports, and my physical activity plummeted. Then I'd wake up at three a.m. with the baby and eat a burrito grande. I tried playing tennis after work, but I felt guilty about not being home. Eventually, I settled on going to a health club during my lunch hour."

Feit vowed not to let Trevor hinder his movements, but the first three months, he and his wife, Holly, hardly took their son anywhere.

"Then we got braver and started packing the car as if for a camping trip when the only place we were going was the local diner," he says. "By seven months, I wouldn't let him slow me down. I'd strap him to my chest and go to a ball game. No problem."

The isolation and cut-off feeling can be dire. "Sometimes parents fall into a rigid routine-frenzied workday, rush home, deal with screaming baby all night, rush back to work, etc.," says Marcus Goldman, M.D., author of "The Joy of Fatherhood: The First Twelve Months." Parenting.com: Can dads have it all?

"This unyielding schedule squelches creativity and piles on pressure. It can lead to irritability, miscommunication, lack of interest -- three traits that don't jibe well for three people trying to live together."

As a result, some couples end up disengaging. Never varying your routine zaps the joy and makes parenthood all about pressure and obligation. The two of you have to mix it up. Shift duties, get out of the house every day, and give each other small freedoms.

Schaus and his wife, Audrey, made a pact. Each got to choose one hobby/entertainment outlet to maintain. He picked sailing on Sunday mornings.

"The twins were a huge amount of work in the beginning -- still are -- and when you're forced to make a decision on what to give up, you quickly see what you really love. This goes for sports as well as friends, job, everything."

The majority of dads won't be heading out to the boat for four hours at a time -- they'll be looking at a couple of hours during the week at best. They should be sure to make the most of it.

"The trivial issues are put aside. I stopped being religious about washing my car. In fact, I stopped allowing myself to be compulsive about anything," says Schaus. "My priorities have shifted, or narrowed. The kids come first."

Feit's worldview expanded. "I can honestly say that before I had kids, I didn't spend any time or energy worrying about the environment. Now, when I see a car spewing black fumes, I go nuts. I've taken this quantum leap, and I see everything in and out of the home as a safety hazard. People with kids and people without kids live in two different universes."

On the People With Kids Planet, money issues weigh heavily. Most dads seem to believe that generating income is their masculine duty, even if their wife works -- even if she earns twice his salary.

Rossant, an architect married to a corporate lawyer, worries about paying for education, finding a bigger place to live, and securing quality childcare. Postman agrees that financial security takes on sudden, central importance: "The moment Sam was born, one of my first thoughts was 'Where can I find me some money?'"

Despite the fiscal crunch, many fathers welcome the new sense of proportion that tends to accompany their outlook shifts.

"I had to reanalyze my professional outlook greatly," says Rossant. "I lost the energy to burn the candle at both ends. The big meeting at three? Who cares?" he asks.

"I still think about my dreams and ambitions, but with new perspective -- I don't take it too seriously," says Kushner. "The meaning of life for me now is taking Samy out for breakfast on Saturdays. That's so much fun. I had a lot of anxieties about money before she arrived, wondering, 'How will we do this? Can we afford a baby?' Well, she's here, and somehow we can."