(Mental Floss) -- Although you probably use it every day, here's some interesting trivia you may not know about deodorant. 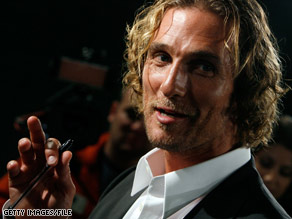 1. Be thankful for your foul body odor. According to anthropologist Louis Leakey, it might be responsible for early man's survival. Leakey's theory claims that most predators avoided feasting on humans because our body odor was "too repugnant."

2. Not only did the ancient Egyptians give us pyramids and flush toilets, they also pioneered the field of deodorants. Egyptians were the first to popularize the idea of applying scents to armpits, usually using cinnamon and other spices that wouldn't turn rancid in the heat.

3. The Roman poet Ovid preferred a more proactive solution. In Book III of the Art of Love, he cautions women against carrying goats under their arms.

4. Antiperspirants are classified as drugs by the FDA. Technically, they affect and/or alter your body's natural functions.

5. The first modern brand of antiperspirant, EverDry, hit drugstores in 1903. The original formula was so acidic that it regularly ate through clothing.

6. Of course, modern antiperspirants can also ruin your clothing. Aluminum chloride, the ingredient that blocks glandular openings and prevents sweating, is notorious for turning T-shirts yellow. So, blame your antiperspirant for your pit stains, not your body.

8. One thing modern antiperspirants don't do is cause degenerative diseases. Medical science has found no conclusive evidence that absorbing aluminum chloride through the skin can lead to memory loss or slurred speech.

9. Aoki, a Japanese company known for its menswear, has developed a deodorant suit that supposedly absorbs sweat and neutralizes odors all over the body.

10. But that's nothing! The greatest Japanese innovation in the fight against B.O. is Fuwarinka scented gum. The so-called "functional candy" contains aromatic compounds that cause your skin to release "Fresh Citrus" or "Fruity Rose" aromas for up to 6 hours after chewing.

11. When Kurt Cobain wrote the lyrics for Nirvana's breakout song "Smells Like Teen Spirit," he didn't know Teen Spirit was a popular deodorant brand. The Mennen Company, which produced the deodorant, wouldn't say whether the song caused sales to spike, but six months after the single debuted, Colgate bought the company for $670 million. Mental Floss: 7 food promotions gone horribly wrong

12. In May 2008, actor Matthew McConaughey revealed that he never uses deodorant or antiperspirant. The next day, he received a year's supply of deodorant body spray from the Axe Company, along with a note on why he might want to start.