(REAL SIMPLE) -- "Mom, I have to ask you something," my seven-year-old Henry begins. He stares at me with those solemn eyes and I steel myself. 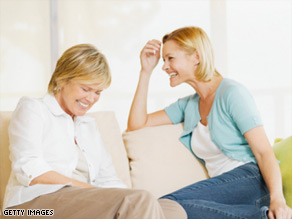 Considering our unique family, it could be any number of things. Why do you and Dad live in separate places? (We are married but never could stand to live together.)

Why is Gus so different from other kids? (Henry's twin brother is mildly autistic.)

Why does Dad look tired all the time? (My husband was 68 when our sons were born... You do the math.)

"Do you think spit cleans better than water?" he asks. "You always use it to clean my face."

You know, it isn't a bad question. And, in a way, every burst of curiosity gives me hope that my boys will continue to quiz me about ever more interesting and personal things. Because, as adults, so many of us don't ask enough about our mothers. (Maybe we're scared. More likely we just don't get around to it.) iReport: Interview your mom

Yet there's no better way to become closer to a person, even if you've known her all your life. So, after an utterly unscientific survey of friends and acquaintances, I've come up with 10 queries to get you started. Try them out this Mother's Day. You may even learn something about yourself.

1. What's the one thing you would have done differently as a mom? Recently I had this conversation with someone I had considered one of the best mothers I know -- the kind who never missed a kid's concert or a PTA conference. Her children are grown now, and they are neither independent nor particularly grateful. Real Simple: Mother's Day gift basket ideas

"I should have let them fail," she told me. "When my daughter forgot to do her homework, I shouldn't have done it for her. When the other one got caught shoplifting, I should have let her spend a night in jail." For better or worse, your mother has probably given this subject a good deal of thought.

2. Why did you choose to be with my father? "Look at him!" my mother says adoringly. "He looks just like Jascha Heifetz!" He does, actually. But Heifetz, perhaps the world's greatest violinist, was one weird-looking dude. And my dad doesn't even play the violin. (Which is a bit like an accountant being the spitting image of Mick Jagger.)

So was there anything else? "Well, he liked smart women," says my mom, who was in medical school when they met in the 1950s. "So many men didn't back then." Not a bad reason to marry someone. I'm glad I asked.

3. In what ways do you think I'm like you? And not like you? Accuracy is not important here; you want to know her perceptions. Does she think you share her best qualities or her worst? (And do you agree?) Are your similarities and differences complementary -- they make the two of you click -- or are they the cause of all your conflicts? Real Simple: Greatest gift your mother ever gave you?

4. Which one of us kids did you like the best? OK, chances are she'll dodge this question. But you'll probably force a compliment out of her -- "You were the one who set the table when you were three" -- and get a little insight into how she viewed each of you. And if she gives a straight answer? Well, you'll all have something new to fixate upon.

5. Is there anything you have always wanted to tell me but never have? The woman who suggested this question had learned late in life that the "aunt" who had lived with her parents while she was growing up was, in fact, her father's lover -- an arrangement that apparently suited all involved. Your mom's secrets might be a little less stunning. But hearing something she has been holding back may take your relationship into (good) uncharted territory. Real Simple: What to do about aging parents

6. Do you think it's easier or harder to be a mother now than when you were raising our family? We might agonize about working more hours outside the home and competing with our kids' cell phones for attention, but our mothers had other battles. "My mom thinks that if she had had a career, she would have been less frustrated and a better mother," reports one friend. The two of you needn't have a "Terms of Endearment moment over this one, but by understanding what she went through, you may appreciate your own situation more.

7. Is there anything you regret not having asked your parents? In my informal survey, the list went on and on, covering everything from "Did you ever think about leaving my dad for someone else?" and "Did you ever want to just throw in the towel?" to "What music do you want played at your funeral?" People regretted what they hadn't asked -- never what they had.

8. What's the best thing I can do for you right now? My mother is not subtle: "Call every day. If you don't, I think you're dead."

Other friends who had asked this question over the years were invariably surprised. One mom wanted her daughter to teach her to use a computer; another wanted her son, a plastic surgeon, to give her a face-lift. ("I had a moment where I didn't exactly love lifting my mother's skin off, but I thought I could do a better job than anyone else," he says.)

The mom of a young colleague wanted to meet her friends. "I'd always thought she wasn't interested in them," she says. "In fact, my mom was just shy."

9. Is there anything that you wish had been different between us -- or that you would still like to change? This inquiry prompted one mother to plan a trip with her 30-year-old daughter -- their first ever. She and her husband had always vacationed alone when their children were young, and she had felt bad about it for years. Whether you're 25 or 55, chances are there is some dynamic between you and your mother that could be better. Give her a chance to put it out there.

10. When did you realize you were no longer a child? I know what the answer will be for me, and I was startled to hear my mother give the same response: "I knew it when my own mother died," she told me. "That's the last time there would be anyone in the world who always put me before herself."

Judith Newman is the author of "You Make Me Feel Like an Unnatural Woman: Diary of a New Mother" (Miramax Books). She lives with her twin boys in New York City, not far from her husband and a quick train ride away her mom, Frances.