Why women are leaving men for other women

By Mary A. Fischer

(OPRAH.COM) -- Lately, a new kind of sisterly love seems to be in the air. In the past few years, Sex and the City's Cynthia Nixon left a boyfriend after a decade and a half and started dating a woman (and talked openly about it). 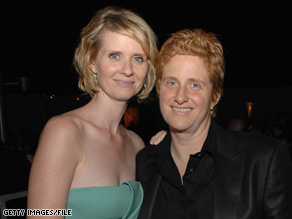 "Sex and the City" star Cynthia Nixon and her partner Christine Marinoni, left, at a 2008 reception.

Actress Lindsay Lohan and DJ Samantha Ronson flaunted their relationship from New York to Dubai. Katy Perry's song "I Kissed a Girl" topped the charts. "The L Word," "Work Out," and "Top Chef" are featuring gay women on TV, and there's even talk of a lesbian reality show in the works.

Certainly nothing is new about women having sex with women, but we've arrived at a moment in the popular culture when it all suddenly seems almost fashionable -- or at least, acceptable.

Statistics on how many women have traded boyfriends and husbands for girlfriends are hard to come by. Although the U.S. Census Bureau keeps track of married, divorced, single, and even same-sex partners living together, it doesn't look for the stories behind those numbers.

But experts like Binnie Klein, a Connecticut-based psychotherapist and lecturer in Yale's department of psychiatry, agree that alternative relationships are on the rise.

"It's clear that a change in sexual orientation is imaginable to more people than ever before, and there's more opportunity -- and acceptance -- to cross over the line," says Klein, noting that a half-dozen of her married female patients in the past few years have fallen in love with women. "Most are afraid that if they don't go for it, they'll end up with regrets."

Feminist philosopher Susan Bordo, Ph.D, a professor of English and gender and women's studies at the University of Kentucky and author of "Unbearable Weight: Feminism, Western Culture, and the Body," also agrees that in the current environment, more women may be stepping out of the conventional gender box.

"When a taboo is lifted or diminished, it's going to leave people freer to pursue things," she says.

"So it makes sense that we would see women, for all sorts of reasons, walking through that door now that the culture has cracked it open. Of course, we shouldn't imagine that we're living in a world where all sexual choices are possible. Just look at the cast of 'The L Word' and it's clear that only a certain kind of lesbian -- slim and elegant or butch in just the right androgynous way -- is acceptable to mainstream culture."

That said, of the recent high-profile cases, it's Cynthia Nixon's down-to-earth attitude that may have blazed a trail for many women. In 1998, when "Sex and the City" debuted on HBO, she was settled in a long-term relationship with Danny Mozes, an English professor, with whom she had two children.

They hadn't gotten married: "I was wary of it and felt like it was potentially a trap, so I steered clear of it," Nixon said in an interview with London's Daily Mirror.

In 2004, after ending her 15-year relationship with Mozes, Nixon began seeing Christine Marinoni, at the time a public school advocate whom she'd met while working on a campaign to reduce class sizes in New York City. Marinoni was a great support when the actress was diagnosed with breast cancer.

Far from hiding the relationship, Nixon has spoken freely in TV and newspaper interviews about it not being a big deal.

"I have been with men all my life and had never met a woman I had fallen in love with before," she told the Daily Mirror. "But when I did, it didn't seem so strange. It didn't change who I am. I'm just a woman who fell in love with a woman." Oprah.com: Cynthia Nixon's new life

Over the past several decades, scientists have struggled in fits and starts to get a handle on sexual orientation. Born or bred? Can it change during one's lifetime?

A handful of studies in the 1990s, most of them focused on men, suggested that homosexuality is hardwired. In one study, researchers linked DNA markers in the Xq28 region of the X chromosome to gay males. But a subsequent larger study failed to replicate the results, leaving the American Academy of Pediatrics and the American Psychological Association to speculate that sexual orientation probably has multiple causes, including environmental, cognitive, and biological factors.

Today, however, a new line of research is beginning to approach sexual orientation as much less fixed than previously thought, especially when it comes to women. The idea that human sexuality forms a continuum has been around since 1948, when Alfred Kinsey introduced his famous seven-point scale, with zero representing complete heterosexuality, 6 signifying complete homosexuality, and bisexuality in the middle, where many of the men and women he interviewed fell.

The new buzz phrase coming out of contemporary studies is "sexual fluidity."

"People always ask me if this research means everyone is bisexual. No, it doesn't," says Lisa Diamond, Ph.D, associate professor of psychology and gender studies at the University of Utah and author of the 2008 book "Sexual Fluidity: Understanding Women's Love and Desire."

"Fluidity represents a capacity to respond erotically in unexpected ways due to particular situations or relationships. It doesn't appear to be something a woman can control."

Furthermore, studies indicate that it's more prevalent in women than in men, according to Bonnie Zylbergold, assistant editor of American Sexuality, an online magazine.

"We found that women's sexual desire is less rigidly directed toward a particular sex, as compared with men's, and it's more changeable over time," says the study's senior researcher, J. Michael Bailey, Ph.D. "These findings likely represent a fundamental difference between men's and women's brains."

This idea, that the libido can wander back and forth between genders, Diamond admits, may be threatening and confusing to those with conventional beliefs about sexual orientation.

But when the women she's interviewed explain their feelings, it doesn't sound so wild. Many of them say, for example, they are attracted to the person, and not the gender -- moved by traits like kindness, intelligence, and humor, which could apply to a man or a woman.

Most of all, they long for an emotional connection. And if that comes by way of a female instead of a male, the thrill may override whatever heterosexual orientation they had. Oprah.com: Meet women who are making the switch

By Mary A. Fischer from O, The Oprah Magazine, April 2009

All About Sex and the City • Same-Sex Marriage • Sexuality