Trust that you'll find exactly what you need

(OPRAH.com) -- Shortly after World War II, executives at Japan's Toyota Motor Company made a decision from which, I believe, we all can benefit. They decided to make cars the way they'd make, say, sushi. 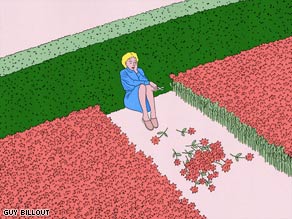 Unlike most manufacturers, which bought and stored massive stockpiles of supplies, Toyota began ordering just enough parts to keep their lines moving, just when those parts were needed. This made them spectacularly productive, and turned the phrase "just in time" into business legend.

I know of the Toyota case because in my former life as an academic, I taught international business management. My students and I had some rousing discussions about just-in-time (JIT) manufacturing, as well as its alternative, which is known as just-in-case (JIC) inventory.

These students were the first people who hired me as a life coach (perhaps because I could never resist applying business theory to everyday life). When we discussed JIT versus JIC management as a lifestyle strategy, we concluded that Toyota's business innovation could positively impact all of our lives. If you feel overburdened, overstressed, and anxious, I'm betting the same is true for you. Oprah.com: 6 ways to let go of stress

Why just-in-case is just crazy

Most people live with a just-in-case mind-set because for most of human history, it made sense. The primary fact of life for just-in-case processes is: "Everything good is scarce!"

By contrast, just-in-time systems rely on the assumption "Everything good is readily available." Well, until quite recently, the former claim was true for most humans -- it's still true for many. But most magazine readers like you live in settings where basic necessities, like food, clothing, and other humans, are plentiful.

Living in an abundant environment but operating on the assumption that good things are scarce leads to a host of dysfunctions that can be summed up in one word: excess. Most of us are living in some kind of excess; we work too much, eat too much, rack up debt buying too much stuff. Yet, driven by the unconscious, just-in-case assumption that "everything good is scarce," we just keep doing and accumulating more. We've all seen some of the unfortunate results, and I've found that most fall into the following four categories:

Starving off the fat of the land

For years I noticed that my clients who lived in a mind-set of scarcity had trouble controlling their weight, even though they dieted assiduously. I also read studies showing that poor women -- particularly those who periodically starved themselves to feed their children -- were particularly plagued by obesity.

Researchers hypothesize that when the body knows it may be starved, whether by poverty or by dieting, it activates automatic just-in-case mechanisms that store fat on the body to get through the next "famine." Ironically, this biological just-in-case mechanism puts fat on precisely the people with the discipline to starve themselves.

There have been several cases like the one in Shelton, Washington, where a woman recently suffocated under a pile of her own possessions. To recover her body, police reported having to "climb over [clutter] on their hands and knees. In some areas, their heads were touching the ceiling while they were standing on top of piles of debris." Oprah.com: Get rid of your clutter for good!

My wealthiest clients have taught me that having lots of money doesn't quiet scarcity-based, JIC anxiety.

This point was reinforced for me when I heard about the suicide of the German billionaire who lost hundreds of millions of dollars in the recent financial crisis. Now, this poor guy wasn't literally a poor guy. He still had a personal fortune. But to a just-in-case thinker who's used to billions, it wasn't enough to keep him from throwing himself in front of a train.

Just-in-case thinking destroys relationships faster than -- and sometimes with the assistance of -- a speeding bullet. Along with the impulse to hoard objects, it also triggers excessive attempts to control our supply of love -- that is, other people. So anxious lovers have their partners followed. Parents micromanage children. People-pleasers try to manipulate everyone into liking them.

This behavior isn't love; it's a fear-based outcome of believing love is scarce. If you've ever been on the receiving end of such anxious machinations, you know they make you want to run, not bond. Oprah.com: How to stop being a people pleaser!

As Toyota execs and my graduate students concluded so many years ago, hanging on to a just-in-case worldview in abundant environments is plain bad business. And as I've seen in countless coaching scenarios since, switching to a just-in-time mind-set ("Everything good is readily available") restores health and balance to our lives.

The great news is that just one mental shift -- focusing on the abundance of your environment -- switches your psychological settings so that your life automatically improves in many areas you may think are unrelated. This is essentially a leap from fear to faith; it's not religious faith but the simple belief that we'll probably be able to get what we need when we need it. When the issues above are considered through abundance-based, just-in-time thinking, it's a whole different ball game:

I've never been a weight loss coach; my focus is on helping people go from fear and suffering to relaxation and happiness. So I was baffled when many of my clients told me, "I'm finally losing weight -- and I'm not even trying."

This intrigued me so much that I spent years researching and writing a book about it ["The Four-Day Win"]. After reading thousands of studies and interviewing dozens of experts, I'm convinced that the thought "Everything good is readily available" kicks the body out of its panicky, fat-storing mode and into a state that helps it shed excess fat.

Dianne is 50-ish and newly divorced. Part of our coaching work helped her develop just-in-time confidence about money (which allowed her to leave the financial security of her emotionally dead marriage).

During our final session, she said, "Something weird is happening. All of a sudden, I'm tidy. I've always been a stuff person, but now I don't add clutter. It's a wonderful, spacious feeling." Dianne didn't achieve this by forcing herself to clean up. She simply developed the confidence of a just-in-time manager, and her behavior changed almost on its own.

"I got really panicky when the economy went south," says Jackie, one of my fellow coaches. "All my business dried up, and I was really scared. But I hate feeling scared, and I'm a coach, so one day I coached myself back to trusting life. I felt better immediately, but what's strange is that clients started coming out of the woodwork. I had to start a waiting list."

This, as any Toyota alum will tell you, is what happens to people who have enough confidence to run a just-in-time operation. I can't quite explain this; it often seems nothing short of miraculous.

Perhaps this is why the authors of the Bible included the story of the wandering Israelites who were given manna from heaven, but only permitted to gather enough to supply their needs until the next manna-festation. Whether you take it literally or metaphorically, this tale was considered important enough to become holy writ. Why? I believe it's to counteract the just-in-case anxiety that makes billionaires keep hoarding more money.

I've done my share of just-in-case controlling when it comes to love (I'd like to apologize to anyone who once wandered into my danger zone). Happily, I've learned that setting people free, not trying to control them, ensures a lifetime supply of love.

Here's the closest thing I know to a genuine love spell: "I'll always love you, and I really don't care what you do."

This is not a promise to stay in a relationship with someone whose behavior is destructive. It's a simple statement that you aren't dependent on the other person's choices. That means you can respond to someone as he or she really is, instead of trying to force a fallible person to be infallible. Knowing that love (like all good things) is readily available, we don't need to control any individual. And oh, how people love being loved without a care. Oprah.com: 6 love decisions we've made for you

When I meet someone who's a mess of excess, I just itch to coach them. I know that if they'd reroute a few simple brain habits, their lives would improve almost effortlessly. The transformation wouldn't take much work -- no need to exhume childhood traumas or hook up an antidepressant IV.

It's almost too easy: Simply by taking your attention off thoughts of scarcity and persistently focusing on observations of abundance, you can replace the nervous, just-in-case mind-set that kept our ancient forebears alive but is killing many of us.

The best way to effect this shift is to use these simple exercises:

1. List 10 times you thought that there wouldn't be enough of something and you survived.

2. List 10 areas where you have too much, not too little.

3. List 20 -- or 50, or 1,000 -- wonderful things that entered your life just at the right time, with no effort on your part. Start with the little things (oxygen, sunlight, a song on the radio). You'll soon think of bigger ones. Most of my clients realize that the most important things in their lives showed up this way.

I started doing exercise No. 3 several years ago, and I still haven't finished my list. Once you deliberately focus on abundance, you'll be overwhelmed by all the good things that show up like manna in the desert, without much effort on your part. If this seems too easy, you can go back to fearful, just-in-case thinking (you'll need a diet counselor, a housekeeper, and a financial planner, but that's okay -- they can substitute for friends).

But if, like me, my business school students, and my clients, you decide to try just-in-time thinking, you'll find yourself struggling less and accomplishing more in ways you'd never expect. You may kick yourself for not discovering this sooner. Relax. I promise, you're just in time.

By Martha Beck from O, The Oprah Magazine, April 2009

Martha Beck is the author of six books. Her most recent is "Steering by Starlight" (Rodale).