(OPRAH.com) -- Motherhood is a wonderful responsibility -- but it can also be exhausting, confusing, infuriating and downright funny. 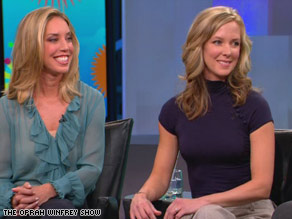 Trisha Ashworth and Amy Nobile felt motherhood hit like a bomb and wrote a book on their experiences.

"I always say moms have the toughest job in the world if you're doing it right," Oprah Winfrey says. "Today, [women] are spilling the beans about a side of motherhood that hardly anybody ever talks about."

She is saluting moms everywhere and letting them know they have support.

"We hear from mothers all the time who say they feel alone. They feel overwhelmed; they feel sometimes inadequate. And you say you're afraid to admit the truth for fear of being judged," Winfrey says. "So today we're creating a judgment-free zone, a sisterhood of motherhood where anything goes." Oprah.com: Stress-relief for busy moms

Heather Armstrong is a mother of a 5-year-old daughter and has another baby on the way. She's getting the conversation started by admitting the aspects of motherhood she says she could do without. "I really don't enjoy the early mornings or the plastic toys," she says. "I don't do arts and crafts, I don't do pipe cleaners, I don't do cotton balls or scissors."

She'd also be happy to never deal with bodily fluids again, she says. "I could do away with the liquids," she says. "The snot and the poo. I'm not fond of those things."

Bodily fluids are a point of contention for the mothers across the board. Vicki Glembocki, a mom of two, says she had a "pee incident" recently during a seven-hour drive with her kids.

"I looked in the back, and the kids were sleeping, which was literally a miracle from God, but the problem was I had to pee," she says. "So I'm thinking, 'If I stop at a rest area, they're totally going to wake up, and I do not want them to wake up.' So I reach into the diaper bag, I pulled out a diaper and I peed into it."

Dee-Dee Jackson, a mother of five, has her own diaper confession. After running out of diapers in the middle of the night, she says she had to make her own. "What we had to do was use a maxi pad until the next morning," she says. "It worked so well, we took our time the next day to get diapers."

Heija Nunn has a diaper tip that has served her well with her three kids. "You have to seed the house and car with diapers," she says. "That way there's always one to unearth in an emergency. Don't put them in one spot -- just scatter them."

The one universal truth about motherhood seems to be that no one ever tells you what to really expect. The moms on our panel say they had to learn the toughest lessons from experience.

Glembocki says the most surprising thing about motherhood was that she didn't feel maternal right away. "I swore to God that the moment my daughter issued forth from my loins that ... my life would finally be complete and I would finally know my purpose. It was not like that," she says. "I couldn't get her to sleep. I couldn't get her to stop crying. I completely believed that I was the only woman in the history of time who did not have the maternal gene, and I thought I was completely alone."

Four years later, Glembocki says she's just now getting the hang of it. Oprah.com: What your baby's cries mean

Melinda Roberts, a mom of three, says she had to learn on her own that motherhood is like a 12-step program.

One major motherhood realization that Roberts says she had with her first child was that she could no longer control everything in her life.

"You can no longer choose your activities, your down time, when you get to sleep," she says. "No matter what you do or where you go, you're always tethered to this other human being in this unbreakable, incredibly fragile way. Anything you do will affect this child potentially for the rest of their life."

Longtime friends Trisha Ashworth and Amy Nobile set out on the motherhood journey together. They had perfect plans -- Amy would stay at work after kids; Trisha would have three children, set exactly two years apart. But, like so many best-laid plans, things didn't work out like they thought. Motherhood, they say, was more overwhelming than they expected. "It was like a bomb hit us," Nobile says. "I didn't feel I had permission to talk about how hard motherhood really was." Oprah.com: Would you trade your husband for a housekeeper?

Eventually, Ashworth and Nobile say they reached their breaking point, and they set out to see if other mothers shared their struggles. After interviewing hundreds of women, they say they've heard all the dirty little secrets of motherhood. Their first book, "I Was a Really Good Mom Before I Had Kids," was based on their findings.

One of the most interesting things Nobile discovered is that mothers are dying to open up -- but it takes time. When interviewing mothers for their book, Nobile says it would take a good 22 minutes of chatting before moms would speak the truth. "We feel like we don't have permission to admit that it's really hard, so we're all walking around with these smiles on our faces, but really we feel alone," she says.

Ashworth and Nobile say they've heard just about everything from moms, but one admission really struck a chord. "One mom said, 'I love being a mom, I just hate doing it because it is an impossible job,'" Nobile says. "We've raised the bar so high."

The common thread throughout Nobile and Ashworth's interviews -- whether they were talking to mothers of one or of five -- was that mothers demand too much of themselves. "The expectations we have on ourselves is completely unrealistic. This generation of women was raised to believe that we should and could do it all," Ashworth says. "And that list [of expectations] is so huge that we think if we can't live up to that, then we're not good moms."

Mothers need to know that if they can't do it all -- or if they don't want to -- that doesn't make them failures, Nobile says. "We need honesty," she says. "We need to support each other more."

Nobile says mothers need to accept that they cannot reclaim the person they were before they had kids. "You have to reinvent yourself," she says.

It's also important to remember that taking time for yourself doesn't make you a bad parent. "Most of us feel guilty, like you have to be on the floor with them 24/7 and give them all your attention or you're not a good mom," Ashworth says. "Redefine it for yourself that way, like, 'It's okay that I'm on the computer and my kids are playing by themselves.' Make peace with that."

Before Armstrong had her daughter, she kept a blog that she says had about 30 readers. The week she gave birth, she says she noticed a spike in her traffic and a new audience of moms looking to connect. She chronicled her experiences breastfeeding and her bout with postpartum depression. She says her blog became her lifeline.

"So many women reached out to me to let me know that they had gone through the same crises and come out the other side," Armstrong says. "It was the hope that they gave me that pulled me through."

Armstrong's blog, Dooce.com, became so popular that she's been called the "mother of all bloggers." The site brings in a reported $40,000 a month in advertising and has become the family business. "I think people are really hungry for that honesty," Armstrong says.

One popular topic on Armstrong's blog is sex and how it changes when you are a mom. "It took seven months [before I had sex after giving birth]. No one had told me that it was going to take that long after what the baby did to me," Armstrong says. "Any guy who wants to have unprotected sex? Seven months without it. Just think about that for a minute. Let that number circulate in your head for a little bit."

As hard as it can be to find time or energy for sex, Nobile says its an effort worth making. "We have to make sex a true investment in the marriage," she says. "A good marriage is the backbone of a healthy family."

Date nights and moments of intimacy send important messages to both your husband and your children about your priorities, Nobile says.

"One husband said [to me]: 'I used to be first, and now I'm pulling up the rear. I'm behind the pet rabbit,'" she says. "Our kids are watching us. So when you go out on that date, you have to sit your kids down and say, 'This is important for our family.'"

In a studio full of moms, one audience member says her biggest complaint regarding motherhood is the unspoken competition between working moms and stay-at-home moms.

"It is a war. It's a kind war, but still a war," she says. "I'm a working mom, so it's important that my family comes first and that I still do everything that a stay-at-home mom does, plus have a career. That means every single one of my vacation days are used for [my kids] -- mommy day at school, a play date or mommy and me things. ... We don't want it to seem as if we love our career more, so we try to do it all and get two hours of sleep."

Jackson is currently a stay-at-home mom, but she was a working mother once too.

"The competition is there because we create it for ourselves," she says. "There's really no reason to compete, because [stay-at-home moms] are just as busy as the working mom. The working mom is just as busy as we are. We just tend to sometimes put the focus on the wrong things. We're all busy 24/7. I consider myself an at-home working mother."

Nobile says these wars arise out of our own uncertainties as mothers. "We're insecure about the choices we're making -- that's why we're judging each other," she says. "We need to give ourselves a collective break." Oprah.com: Try Amy and Trisha's judgment exercise

"Have compassion for each other," Ashworth says. "Realize we all have issues, and we're all doing the best we can."