(OPRAH.com) -- You say you hate confrontation, that you'd rather have oral surgery without anesthesia than a tough, cards-on-the-table talk with a colleague, spouse, or friend? Have we got a plan for you. 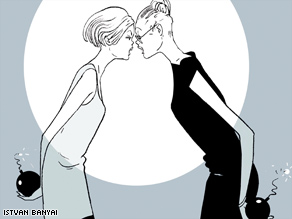 Before you confront someone, separate the practical issues from your emotions.

What's that? You say you love confrontation, that you may even be a little too eager to open up a can of weapons-grade whup-ass -- but that, come to think of it, these big blow-ups are getting you approximately nowhere? Have we got a plan for you.

And it's the same one. Developed by corporate coach Esther Jeles, this fresh approach to conflict resolution has been road-tested by hundreds of participants in the workshops she holds for businesses interested in improving communication and increasing productivity.

"Confrontation isn't about telling someone off or setting them straight," says Jeles, founder and CEO of Aylet, a Chicago-based consulting firm. "Confrontation is looking at issues and solving problems."

You can participate, or you can let things happen to you, Jeles notes. "You can only affect the outcome directly if you speak up," she says. "Nothing ever changes for the better unless opposing parties come together and discuss the situation and solutions."

Most important, a healthy confrontation can be a chance for you to help people feel better about themselves, she says. "And to be proud of your own behavior." Oprah.com: Groundbreaking research on self-esteem

Confrontation? A mental health tool, a community builder, a force for kindness? The word definitely has a bad rep, even though it emerged from the mildest of roots, the Latin for "together" and "forehead"; initially it meant simply "to come face-to-face." Jeles urges a return to the collaborative image conjured by the word's origins -- putting our heads together to reach a common goal.

The term she uses for this kind of encounter is carefrontation. Reframing the definition creates an instant attitude shift in her clients, Jeles says, especially after she helps them realize that they're already champs at healthy confrontations. "We've all had hundreds of them!" Jeles says. "But we tend to remember only the confrontations that got ugly, and to call the successful ones something else."

What did we intuitively do right in the non-ugly encounters? Some version, Jeles says, of the three core steps that she recommends:

Before you confront another person, have a long talk with yourself and try the following.

• Define the problem, separating the practical issues ("I stayed up all night finishing a report because a colleague didn't turn in her share of the research") from the emotions they evoke ("I'm furious with her for sticking me with extra work!").

• Engage in what Jeles calls self-witnessing. "That means asking yourself: 'What does this situation remind me of? How have I handled such issues in the past? What's my pattern?'"

For example, the woman stuck writing the report might realize that what she does, over and over, is bite her tongue even when she sees disaster looming, because she dreads conflict. "Maybe she'll notice that the situation reminds her of her relationship with her sister," Jeles says. "Maybe the family pattern was that she was always stuck holding the bag and cleaning up after her sister. When she sees the pattern, she can change it."

• Practice expressing the problem in a clear, calm way, without blaming the other person. "Don't throw in everything you've held in for a year," she says. "That wouldn't be a carefrontation; it would be an assault."

2. Offer an invitation to talk

• There's no single surefire opener, Jeles says. "But a couple I've seen work well are 'I sense there's something you want to talk to me about. If now isn't the time, I'm ready whenever you are,' or 'I've got some suggestions that I think can really help you.'"

People might feel suspicious at first, interpreting "I think I can help" as code for "I'm preparing to attack." Eventually, though, Jeles says, "they're grateful, because they're floundering." Oprah.com: How to say the hard things

• Present the thoughts you collected in the preparation stage, being careful not to blame or accuse.

You're not listening, Jeles points out, if you're preparing your next verbal volley --"reloading," she calls it. One time-honored way of keeping yourself from reloading is reflecting back to the other person: "So let me make sure I understand what you said...."

• If the confrontation is taking place at work, Jeles stresses, leave your emotions out of the discussion. Suggest solutions that focus on tasks and goals instead of the person's faults.

"Get right to what I call www.com: Who does What by When Communication. That's 99 percent of the communication required in corporate America," says Jeles.

"Focusing on productivity instead of blame -- fixing the plan, not the person -- shifts the mood from threatening to uplifting." Set a time for meeting again to check in with each other about how the new plan is working. Oprah.com: The key to all good relationships

If the confrontation is taking place off the job -- friend to friend, spouse to spouse, or parent to child -- then you do need to express your emotions clearly, but calmly.

"So you might say to a teenager, 'Last night when you didn't come home when you said you would, I felt disappointed and angry, but mostly I was afraid something bad had happened to you. Have you ever had that feeling?' Then ask what was going on with her." The focus should be on understanding each other's feelings and thought processes.

A common cause of conflict both at work and at home, according to Jeles, is not discussing a problem as soon as it comes up.

And if the relationship is one fraught with conflict? "I tell all my clients, it doesn't matter what the history is, you've got to start new somewhere." Begin using carefrontation steps every time the smallest thing comes up, Jeles says. "That creates very different results than waiting until you're just about ready to pop your balloon."

Once you redefine confrontation and learn to do it better, Jeles promises, you'll no longer be tortured by the rule-flouting teen, the shirking colleague, the belittling boss, the secret-spilling friend, or the Man Who Mistook His Wife for a Doormat.

The more you practice, she says, the easier it gets to give good carefrontation, and to receive it.

By Judith Stone from O, The Oprah Magazine