(The Frisky) -- I have said and/or done the wrong thing so many times that it's truly the eighth wonder of the world that I ever managed to trick anyone into dating me more than once. 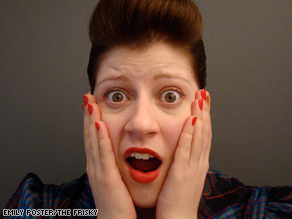 Don't panic, some dating faux pas can be dealmakers, not dealbreakers.

There was the time I fell off my chair and farted (loudly) just as my butt hit the ground. Or the guy I leapt away from as he tried to kiss me, gesturing frantically at the giant oozing cold sore on my lip. (I still don't know how he missed that thing -- I'm pretty sure it was visible on Google Earth.)

There are plenty other gems in my arsenal of embarrassment, but who hasn't had a red-faced moment or 10? I used to beat myself up over these transgressions, but despite my occasionally questionable behavior, most of the men I've been out with have forgiven me quite cheerfully. In turn, I've turned a blind eye to their missteps and gaffes. What I've found is that it comes down to levels and limits. Here are some guidelines.

Diane Mapes, author of "How to Date in a Post-Dating World," thought she'd done everything right with one particular paramour. She'd waited the obligatory three dates and had all the fixins' for a good breakfast the morning after their first all-nighter. "I made toast and was frying bacon, but I let the bacon cook too long and it started smoking," she laughed. "The fire alarm went off."

Yeah, big deal, I thought-my smoke detector goes off every time I attempt stir-fry. But no.

"I lived in an old building and the fire alarms were directly linked to the fire department." So there's Diane, in her flirty, barely-there pajamas and suddenly, "I have six muscular fireman, grinning at the door." All Diane could yelp was, "I just burned my bacon!"

She was mortified, but her date (who became her boyfriend despite her profound lack of cooking skills) and the firemen found it hilarious.

Yoga teacher Chintamani knows her way around a gym and so she thought she was on safe ground when she began talking shop with her date.

"I started spouting off about how personal trainers are all a bunch of ignorant dilettantes," she told me. "I paused to take a breath and my date informed me that his mother was a personal trainer."

Oops. Even though Chintamani apologized profusely, and the date went on from there, the two never saw each other again. Which is fine because she's now dating a personal trainer. "Who is not an ignorant dilettante," she is quick to add.

While Chintamani's faux pas proved unforgiveable, it's good to remember you can always use this tactic to get yourself out of an uncomfortable situation on purpose. When Dan R. found himself bored to tears by a rock-critic date and his collection of obscure references, Dan informed the dude that his favorite musician was Karen Carpenter and music had died for him the moment she passed on. The rock-critic was out like a shot and Dan could finish his meal in peace.

You'd think that vomiting would be an immediate dealbreaker on any first date, but in the case of Seattle-based radio-show host/comedian Monti Carlo, you'd be wrong. "I whispered that he looked like a water color painting and commenced burping out massive amounts of vomit," she told me.

Though Monti eventually married someone else, the two continued dating for quite some time after their initial outing.

Ann, another woman I spoke with, told a similar story about an ill-timed regurgitation. Not only did her date clean up after her, "He still wanted to make out the next day!" After she brushed her teeth, naturally. That guy? He stuck around for two years!

So the next time you say or do something you feel is utterly unforgiveable, just remember that it could've been a whole lot worse.