Dating downside of the age gap

(The Frisky) -- In my twenties, I dated a guy who was 12 years older than me. In my thirties, I went in the other direction, dating a dude 11 years my junior. (Don't you dare call me a cougar!) 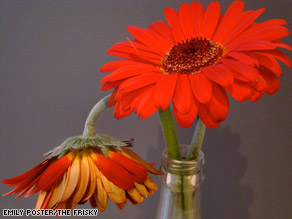 Big age differences can be detrimental to a relationship's success.

Although both ended rather badly, I feel like that while the gaping age difference didn't directly cause either relationship's demise, it certainly didn't help. Mostly because I wasn't very graceful about handling it.

So, learn from my mistakes. Whichever way your May/December relationship skews, there are certain pitfalls you should do your best to avoid.

1. Stay away from cute but ultimately disparaging nicknames. I used to refer to my younger man as "Junior Mint." I found it hilarious, but he was less amused. Looking back, I don't blame him. I certainly wouldn't have found any humor in him calling me "Old Spice."

2. Constant reminders of the age difference can be entertaining, but they can pass easily into the realm of creepy. "How could you not know who David Cassidy is?" is one thing. "I was having sex while you were in kindergarten" is kind of gross.

3. Don't assume older is wiser. I made this mistake with my much older boyfriend. I thought he was the smartest guy I'd ever met. He agreed wholeheartedly. Turned out, we were both wrong.

"I sometimes felt overshadowed by him, and his stature, and fame," Missy says of her 14-years-older ex-mentor/boyfriend. "But he acted more adolescent than I did much of the time. Sometimes, I felt like the old one."

I hear ya', sister. My elder ex hadn't filed taxes ever. When he got caught, he had his bank account seized and wages garnished. Smooth move, idiot.

4. Then again, sometimes older is wiser. Genevieve has been dating her decade-younger girlfriend for a few years, and their main conflicts come not in the bedroom but in the kitchen.

"I have ten years more cooking experience, and the youngster need to get out of my way when I'm making dinner," she snaps, annoyed by the previous night's gnocchi disaster.

5. Some behaviors come with an expiration date. As my friend Boris informed me, "Crazy in a young girl is cuter than with an 'older,' or more age-appropriate, I should say, gal."

Ben saw the bloom fall off his much younger rose. "I grew tired of being with a 24-year-old self-described artist who was really just avoiding work," he says. "Being older meant I could suss out the difference between artistic notions and, well, laziness."

6. Prepare yourself to feel like an alien upon meeting their friends and family. My older boyfriend's guy friends were fine with me (go figure), but most of his female friends gave me, and him, the hairy eyeball. Even though I wasn't exactly a teenager, I felt like a dumb, young piece in their presence.

With the younger boyfriend, I had to contend with his buddies who yammered on about college and getting waaasted on frat-boy beverages like Jagermeister. It's a toss-up which was worse.

While there are plenty of happy couples with decades between them (like Bruce Willis, Demi Moore, and their sweet, young second spouses), there are plenty more who never bridge that gap (Jennifer Aniston and John Mayer, to name but one). Here's hoping you learn from my mistakes.