By Michelle Goodman
Special to CNN

(LifeWire) -- Trisha Marcy wasn't looking for anything in particular when she decided to rummage through her mother's nightstand drawer in 1986. 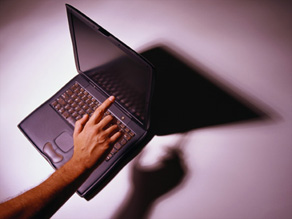 Snooping through your partner's e-mails can be a sign of bigger problems in the relationship, expert says.

But what started as boredom-fueled snooping quickly turned into a life-altering experience for Marcy, who was a high school senior at the time.

"I found paperwork from the County of Los Angeles that showed that I was adopted," says the Eugene, Oregon, woman.

Marcy was "completely devastated" but too terrified to confront her adoptive parents because she didn't want them to know she'd been poking around their bedroom.

"Part of me was like, 'I'm going to get in so much trouble for being in my mom's stuff,' " she says. "It took me a couple days to get up the courage and ask about being adopted."

After the initial shock wore off, Marcy confronted her parents, who confirmed her findings. Fences were mended, hugging ensued -- and Marcy gave up snooping for good, she says.

Whether it's peering in a party host's medicine cabinet or peeking at a date's unopened mail, spying on friends, family and significant others is as common as flu in the winter.

Snooping is a wonderful source of information -- especially if you don't have "an open, seamless relationship" with someone, says Thomas Merrill, a Peoria, Arizona, clinical psychologist who specializes in adult and parent-child relationships.

Tamara Komuniecki, for instance, gave in to curiosity in 2000 and poked through a live-in boyfriend's e-mail.

"I opened up Hotmail, which I meant to use to sign in to my account, but instead it went directly to his in-box," says Komuniecki, a writer from Long Beach, California. "An e-mail with the subject line about thong panties caught my eye."

In the message, Komuniecki's musician boyfriend was flirting with one of his fans.

"He was upstairs taking a nap, so I printed out the e-mail, drew a large question mark across the page with a black Sharpie, and left it on the stairs," says the thirty-somthing Komuniecki. "I was so mad, especially because it was my computer."

When her boyfriend woke up and found the printed email, he was "apologetic but angry that I had 'invaded his privacy,' " Komuniecki says. Still, the couple forgave and forgot, at least for the time being.

Snooping, Merrill says, can be indicative of larger relationship problems.

"With a partner or a significant other, if you have to snoop, that should be signal No. 1 that there's something wrong," he says.

Linda Domingo, 22, can attest to that. She was already having problems with her boyfriend of two years when he admitted during an argument that he'd read her private journal, including an entry in which she mused about what might have been with "an old crush."

"It was a total violation of my privacy and my trust," says Domingo, of Irvine, California. "If he had these suspicions, he could have just asked me, and I would have told him the truth. That pretty much ended [the relationship] for me."

Merrill says rifling through a diary or in-box is never a good substitute for talking about relationship woes with your significant other.

If you can't communicate directly with your partner or get the information you need from him or her, "that's a relationship problem," he says. "That's the time to confront the issue, not snoop."

Resisting the urge to spy on your sweetie is of course easier says than done, especially when technology makes it so easy. Just ask Rich Savoie, a 29-year-old engineering manager from Boston.

In 2006, Savoie's then-girlfriend grew jealous over a handful of late-night text messages he received during a two-week period. The messages were from his sister, a security guard on the night shift. But Savoie's girlfriend never bothered to ask who they were from, he says, so she snooped.

"She felt like a bonehead when she checked my phone covertly and realized the texts were from my sister," he says.

Savoie is hardly alone. A study conducted in 2008 by Virgin Mobile found that a third of Australian cell phone users under age 30 check their partners' phones on the sly to read their text messages. Of these text-message snoopers, 73 percent "found out things they later wished they hadn't," and 10 percent were "involved in a breakup as a result."

Before you snoop, know the law

Just because the technology exists doesn't mean it is legal to use it to spy, says Chris Woodson, a private detective in Newport Beach, California. He offers these guidelines:

• "A good rule of thumb for what's legal is whatever's out there in public already," he says. Picking through someone's curbside trash is OK. Snooping in the backyard, however, is not.

• Opening someone else's postal mail is never OK. Ditto for hacking into e-mail, text messages or voice mail. However, things get murky when you're talking about joint property, and laws vary from state to state.

• Minors are the exception to the rule. It's perfectly legal for parents to monitor their children's phone calls and online activity.

• In the workplace, privacy goes out the window. Private sector employers have the right to read or listen to any correspondence conducted on their equipment.

LifeWire provides original and syndicated content to Web publishers. Michelle Goodman is a freelance writer and author of "My So-Called Freelance Life: How to Survive and Thrive as a Creative Professional for Hire."