Bust out of money-fighting rut with spouse

(Parenting.com) -- My husband and I would have the perfect marriage if there were no such thing as money. On most issues, David and I are on the same page, but when it comes to cash we're reading completely different books. I'm a saver who balances my checkbook to the penny; he's a spender who knows only "about" how much cash is in the bank. 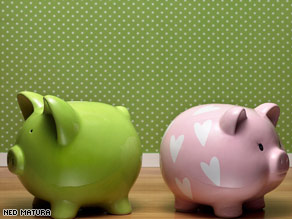 Our money issues got worse after we became parents. The night after our now 6-year-old daughter, Lily, was born, it wasn't just the pain of delivering a nine-pound baby that kept me up -- I tossed and turned worrying about the cost of childcare and college.

Later on, I'd get mad when David impulsively bought Lily books or DVDs. In turn, he resented that I wouldn't let him spoil her. I'd even get annoyed when he did something nice for me, like hire a sitter so we could go out. Didn't he realize the price tag of such a treat?! It wasn't long before money squabbles became a regular part of our daily routine. Parenting: Why his way of doing things can be better

I know now that our struggle to find common financial ground was far from unique -- arguing over money is the number one cause of divorce. But I also know that being stuck in a money-fighting rut doesn't doom you forever. In fact, the path to peace is probably a lot easier than you think. Ready to get started?

1. Remember that your relationship is about more than the bottom line

I used to think that nobody else had money issues like David and me. Every time we fought, it felt as if there was something seriously wrong with our marriage. And, of course, that worry only made our money "talks" even more tense. The truth is, no two people are ever in complete agreement over money.

"Even if you and your partner are both savers or both spenders, you will still polarize about money, and that's okay," says Olivia Mellan, a mom of three in Washington, DC, and author of "Money Harmony".

One person will eventually become more of a spender or a saver to balance out the other, and disagreements are bound to happen -- but not because there's some hidden flaw in your marriage. Simply knowing that can help you face your differences and discuss them calmly.

For me, once I took my Oh-my-God-are-we-just-a-bad-match? fear out of the equation, I was more confident about bringing up the subject of money and less angry when David and I discussed it. Who knew? He responded in kind.

A big part of how you deal with money today is based on how your parents handled it.

"When you know the reasons driving your spouse's behavior, it makes more sense and you're less likely to feel angry when you disagree," says certified financial planner Sarah Young Fisher, president of Kuntz Lesher Capital LLC in Lancaster, Pennsylvania, and a mom of two.

Taking her husband's childhood into account worked for Vicki Brown, a mom of two in Atlanta.

"When I realized that my husband, who's a spender, grew up without any extras or luxuries, I became less resentful and more compassionate," says Brown, who's in charge of the family's finances. Parenting: 101 ways to bail out your budget

"Now when I get upset, I try to remember that fact, especially when he's splurging on something for our children that he didn't have growing up, like a wonderful vacation. It's not that we don't ever disagree now, but at least I get where he's coming from."

3. Give a little credit

Even if your partner's financial habits are totally foreign to you, there's usually something you can admire about them. The hard part is that every now and then, you have to tell him! "This creates goodwill in a marriage and makes the other person feel safe enough to take an honest look at his own issues," says Mellan.

Ali Velshi and the sharpest minds in money dissect the stimulus bill and how it affects you.
Tonight, 11 ET

I can attest to the power of a compliment, which I tried on the night David and I pay bills -- a chore that usually ends with us going to bed without speaking. When I spied the cost of a pricey fishing pole on our Visa bill, I took a deep breath, then told him that I admired how he can buy something without overanalyzing it. I'd never said that to him before, out of fear he'd just spend more.

David immediately relaxed, and told me that my diligence in managing our bank accounts and the kids' college funds was one reason he thought I was a wonderful mother. (Yay! I was more than an annoying, tightfisted wife!) That night, not only did we go to bed on speaking terms, we actually felt closer.

Before you can really get a sense of where your family stands financially, you need the hard numbers -- what's coming in and what's going out.

Normally, such a thing is called a budget, but there's something about that word that's kind of awful: It's unyielding, bossy. Always trying to force you to live by its rules. To a spender (in particular), budgets practically ask to be blown.

A spending plan, on the other hand, feels more reasonable -- something you can live with. This tiny shift in semantics helped Lisa Druxman of San Diego, a mom of two.

"My husband's conservative and meticulous about money, and I'm carefree and believe you need to take risks -- which makes it hard for us to talk about," she says. "Creating a plan helped because now we both understand our income, expenses, and what's left over. And having one that we created together reminds us that we're on the same team working toward the same goal."

Getting started is pretty simple: Write down your fixed monthly expenses, like the mortgage and car payments, and subtract that amount from your income. Then figure out how much you can spend or save by factoring in the things you can't do without (diapers and food) and ones you can (ordering in lunch at work).

Financial software like Quicken and Microsoft Money Plus can help, as can free Web sites like Mint.com and MoneyCenter.Yodlee.com, by pulling info straight from your online accounts. Doesn't matter how you do it, as long as it works for you. Parenting: Real-life money makeover stories

Having a regular time to meet, along with a set agenda, eases stress and helps make sure both people are prepared, says Mellan. Plus, both of you should have a general idea of your finances at any given time: What big-ticket expenses are on the horizon? How much debt do you have? What's in your savings account?

If you sit down once or twice a month to talk, the bill payer doesn't resent having the stress of making ends meet and the non--bill payer doesn't question the other person's abilities -- or check out completely.

Why? Because having cash of your own is a very, very good thing.

"When my husband and I had just a joint bank account, we used to fight because we had to discuss every single purchase, whether I wanted a new dress or he wanted stereo speakers," says Fisher.

"Then we decided that we'd each get a weekly allowance. This way, if I want something, no matter how trivial, I can buy it because it's my money. It was a huge change in our relationship because now we never fight about money like we used to."

And before you discount this advice because you're a one-income family, hold up: Separate accounts can work well for you, too. Once you agree on allowance limits, the person at home with the kids doesn't have to feel guilty about spending money the other earns, and you both can stop keeping tabs.

To divide and conquer, try setting up three checking accounts: one joint account for expenses and two individual accounts for your personal stuff. In the joint account, deposit equal percentages of your incomes (not equal amounts of money) to cover household expenses, then put your allowance amounts in the others.

With multiple pots, multiple needs get met with a whole lot less stress. And that's good news for your bottom line -- and your marriage.

All About Marriage • Personal Finance