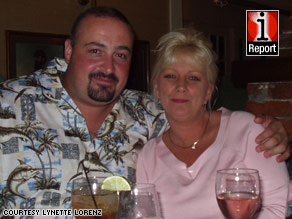 Tony and Lynette Lorenz pose, in more financially secure times, for a picture the night before their 2004 wedding.

(CNN) -- Ever since her hometown of Fort Myers, Florida, earned the distinction of having the highest rate of foreclosures in the country, Lynette Lorenz has spent the bulk of a year away -- 1,200 miles away -- from her home and her husband.

The 42-year-old automotive service provider, a commission-only position that helps car buyers with maintenance needs, once raked in $95,000 a year.

But as the recession rolled into Fort Myers, the jobs, including hers, dried up. Now unemployment in Fort Myers is near double-digits.

Lorenz became depressed and the tension between her and her husband, who works in the same industry, soared, sometimes forcing her to retreat to the spare bedroom.

"I was miserable," she said. "I'm not the kind of person who can sit around the house all day." iReport.com: Tell us how you're surviving

So in March 2008 she up and left, heading north to Maryland, where a friend said the automotive jobs were plenty. It was an extreme measure, but it was one she felt she had to take during these hard times, both for personal and financial reasons. Within one week, she landed at a Nissan dealership in Timonium, north of Baltimore.

Homesickness drove her back to Florida in July, where she found the Fort Myers economy in even worse shape and jobs even tougher to come by. The city's continued struggles even prompted a visit from President Barack Obama earlier this week.

Depression, tension with her husband, and a general lack of purpose returned full throttle. In November, with only $50 in her pocket, she returned to Timonium and managed to get her job back. Lorenz says she now works 10 times as hard to make half her former income.

She paid $250 in cash for a 1991 Nissan and moved into a utilities-included apartment, where she slept at first on an air-mattress with borrowed sheets. She combed through the free furniture listings on Craigslist, and scoured Goodwill and cheaper outlets for good deals. She found a couch and chair for $25, and artwork for $7.

"You have to be at the bottom to find out what your strengths are," she says of her resourcefulness. "Pure determination got me here, and I'm really proud of it, too." iReport.com: 1,200 miles apart and surviving

It hasn't always been this way for Lorenz, who said she used to be a "country club girl." There was a time when she spent money as if her financial well had no bottom.

She said she bought new homes when she became bored with the old, and bought Versace and Chanel at fancy department stores such as Nordstrom and Saks Fifth Avenue, often on credit.

Flanked by two of her three daughters, including her then-15 year old who counted 100 pairs of shoes in her own closet, Lorenz got a televised dose of reality from the mustachioed host.

"He made a statement that stuck with me ... 'You define yourself by what you have, not who you are,' " said Lorenz.

"I'd never looked at my life that way before."

Watching the program later made her think, and says Lorenzo, "The spending stopped." Good thing it did, because the hard times ahead would require it.

She says she has learned to appreciate what she has and scoffs at her one-time need for high-end labels. Tossing her once-coveted $500 Chanel sunglasses on the counter, she laughs and says, "These suckers don't even stop the sun from coming in my eyes."

Lorenz laughs easily and often, but her situation is fraught with challenges. She is, after all, 1,200 miles away from her husband, Tony, 38, whom she married in 2004. But the couple generally talks daily, and occasional visits help sustain them, even if parting is difficult, says Lorenz.

"Every day you wish you had a job [in the same city] with each other, but unfortunately that's just not the way it happened," she said.

Tony, reached in Fort Myers, said being separated from his "strong-willed" wife can be difficult.

"I want her to come home for selfish reasons -- because I want to spend the rest of my life with her. ... But I don't want her to feel or get depressed because she's not working," he said.

"It's probably a lesson for us. We argued. We worked against each other. We weren't sure of our appreciation for one another until we weren't together."

Turns out they may be back together sooner than they thought. Nissan announced Monday that it would be slashing 20,000 jobs. Lorenz won't know until February 24 if she'll be laid off, but, she says, she won't let the possibility get her down.

"If one door closes, another one will open," she said. "If it comes to an end here, that's God telling me, 'It's time to go home and be with your husband.' "

She said she doesn't worry about a return to depression if she does go home. The time away has "made me a stronger person," she said.

"I'm in a different place ... I have seen so much since March of last year ... and have met so many people who are so desolate," she said. "I still have my family, still have my husband, and that's enough for me."

And if need be, she said she's no longer above working outside her field. "I'll sell minnows at the beach. Everyone needs minnows to fish with," she said with a laugh.

"I may have to go outside that comfort zone, but I'm fine with it."