(CNN) -- Donald Trump, businessman and CEO of The Trump Organization, knows a little something about money. 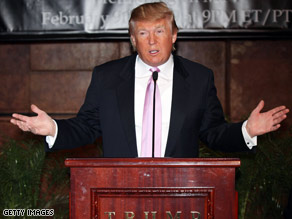 Donald Trump says President Obama is trying to solve the nation's economic woes, but it's "trial and error."

Trump spoke with CNN's Larry King about whether there should be executive pay limits, if there should be a stimulus plan and when there could be an end to the economic downturn. The following is an edited portion of the interview.

Larry King: Is Obama right or wrong to go after these executives with salary caps?

Donald Trump: Well, I think he's absolutely right. Billions of dollars is being given to banks and others. You know, once you start using taxpayer money, it's a whole new game. So I absolutely think he's right.

King: What about the whole concept of bailouts?

Trump: Well, it's a little bit different. A lot of people are not in favor of bailouts. You know, we talked about all the different things going on in this country. Let's face it, Larry, we are in a depression.

If they didn't do the bailout, you would be in depression No. 2 and maybe just as big as depression No. 1, so they really had to do something. The problem is they're giving millions and billions of dollars to banks and the banks aren't loaning it.

If you are a prime customer of a bank and if you need 10 cents, you can't get it. The banks are out of business. They're not loaning. Now, billions of dollars has been given. They're supposed to be loaning out that money and they're using it for other purposes, so it is a real mess.

King: If you were in the Senate, would you vote for the stimulus plan?

Trump: Well, I'd vote for a stimulus plan. I'm not sure that all of the things in there are appropriate. Some of the little toys that they have are not really appropriate, and they're a little surprising that they seem to want it, because the publicity on it has been terrible.

I would certainly vote for a stimulus, but I would really vote for banks having to loan out the money because they're not doing that.

King: In your adult career, have you ever seen it worse?

Trump: No, this is the worst ever. This is the worst I've ever seen. 1990 was a bad period of time, but this is far worse, and this is worse on a really global basis. I'm looking at different countries. Every country is bad. Now they're blaming us because of what happened. You know, why not blame the United States? But every country is in trouble.

King: Can you put the blame anywhere?

Trump: Well, look, it's something that, to a certain extent, happens. You go up, you go down. You have recessions. If you just look at the charts over the period of 150 years, you've had good times (and) you've had bad times.

Certainly, there's been a lot of greed. There's been a lot of stupidity. You know, like I say, today the banks don't have money, they don't loan money. But if you went to a bank two years ago and you wanted a $300 million loan, they'd say 'No, we don't want to do that, but we'll give you $400 million,' so I guess, to a certain extent, that's part of the problem.

King: If you had the power, if you could wield, what would you do?

Trump: Well, the biggest problem we have is it's trial and error, Larry. I mean we've never had anything like this before. It is absolute trial and error. They're trying. The new president is trying. Bush left him with a mess -- a total mess in many different ways. I really think he's doing the best he can, but it is trial and error.

They try something, if it works, great. If it doesn't work -- and the problem is you don't really know if it's going to work for quite some time. If it's really wrong -- and it could be wrong -- we're going to really have a mess in two years.

All About Donald Trump • National Economy