What wouldn't you do in front of your spouse?

(LifeWire) -- For a couple in their sixties, Cynthia MacGregor and her live-in partner, Grant, have few hang-ups about personal boundaries: In their household, the bathroom door is always open, regardless of what's taking place inside. 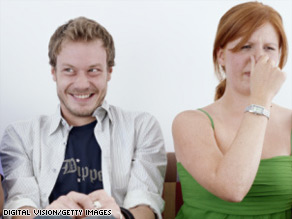 Couples can disagree about what is appropriate behavior in front of each other.

But MacGregor has one hard and fast rule -- Grant cannot see her toothless mouth or her mouthless teeth.

The 65-year-old Florida resident has sported a full set of false teeth since her early forties -- a "business decision" made because of chronic dental issues. MacGregor is so disturbed by the thought of Grant seeing her toothless that she even wears them while sleeping.

But not every couple share similar views on personal boundaries.

Doug Lueder and his wife Sam have wildly disparate ideas of what's appropriate to display in front of others, a philosophical difference that literally exploded one night during their courtship: Doug tried to impress Sam by holding a lighter to his backside while passing gas.

The bad news: Sam hated it, along with Doug's other explicit exhibits of certain personal habits. The good news: She married him anyway. The couple now lives with their two small children in Atlanta, Georgia, where Mommy teaches them to pass gas discreetly and Daddy, well, breaks wind blithely and chuckles about it.

"This is something we've had to come to terms with," says the British-born Sam Lueder, 37, a marketing executive who describes herself as "quite prim and proper" and her 43-year-old husband as "loud, gregarious and crass."

"We've met halfway," she adds. "If Harry [their 3-year-old] burps or passes wind, he says, 'Excuse me.' Doug will also say, 'Excuse me' -- but with a laugh. Maybe Harry will just understand there are different kinds of people in the world."

This essential dilemma -- differences between individuals -- underlies every intimate relationship. But conflicting opinions of what's acceptable to do in front of others -- from plucking eyebrows to using the toilet -- are normal among couples and do not usually threaten a relationship, New York psychotherapist Jonathan Alpert says.

"I think these types of things -- burping, [passing gas], blowing your nose -- show comfort and intimacy in front of your partner," Alpert says, "though I'm not suggesting you should do these things to build intimacy."

Indeed, some believe there's such a thing as being too close, which colors their views on what behaviors to exhibit and what's better done behind closed doors. Kim Wilder-Lee has a long list of things she won't do in front of her husband of 14 years -- including weighing herself and taking off makeup -- and makes no bones about what she doesn't want to witness him doing, either.

If her spouse is using the toilet with the door open, Wilder-Lee, 43, will close it for him.

"I don't want to be part of that. ... It isn't a part of his life that I want to see," says the Temecula, California, freelance public relations consultant, who advocates retaining a bit of "feminine mystique" in marriage. "He thinks it's ridiculous that he can't know my weight, but that's just the way it is. He knows I'm not at all uptight in most areas of my life."

And while certain gender stereotypes hold -- women tend to keep certain habits private while men veer toward openness -- some behaviors are purely personality-driven. Take bachelor David Seaman, who won't clip his toenails or even shave in front of his new girlfriend, Lindsay.

"I'm probably not the typical male," says the New York author and blogger, 23. "I personally don't mind when someone likes a little privacy. I'm probably like this because it's still early on in our relationship, but I tend to be somewhat guarded."

Ditto for Jessica Odenbach, 27, of Chicago, who thinks her boyfriend's upbringing in a large family explains why he'll pop pimples, blow "snot rockets" and discuss bowel movements in front of her despite her obvious discomfort.

"Even if we're out with friends, I'll go to the bathroom to blow my nose," says Odenbach, a media specialist. "If he does that in front of us, I give him a dirty look and say, 'Don't you need to go to the bathroom?' "

"We do occasionally have a tiff about these things. No brawls," she adds. "But he doesn't necessarily know what will bother me."

What if your personal boundaries are totally different from your partner's? Cherry Hill, New Jersey, relationship coach Jo Anne White offers these tips to keep the peace:

• Communicate: "After we get over how disgusting their habit is, what can we do about it? We can negotiate about this."

• Compromise: "If it's a little habit we can adjust or alter to get more satisfaction into the relationship, why not?"

• Support: "Our partner needs us to be a friend, someone who's really in their corner rather than always being critical or finding flaws."

All About Marriage • Etiquette and Manners