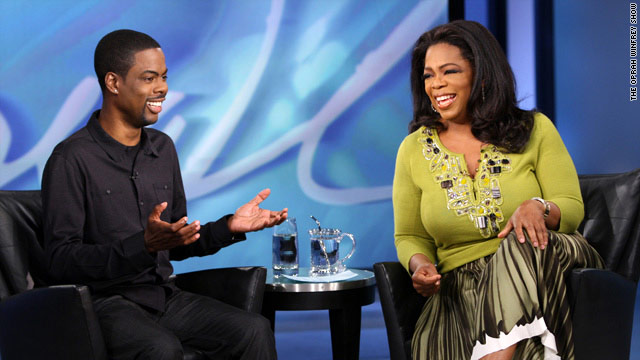 (OPRAH.com) -- Chris Rock is an Emmy-winning comedian, devoted husband and loving father --but it's time to get to know a new side of this funnyman. Meet Chris Rock, hair expert.

It's a detour he took after an innocent carpool ride left Rock with an idea he just couldn't shake.

"I was with my daughter one day, and we're in the car and she's with one of her friends in the back seat, a little white friend," he says. "She was just kind of raving about her friend's hair a little too much for my comfort [saying]: 'You've got great hair. Oh, your hair's so good.'"

Not wanting to make her comments a big deal, Rock says he tried to play his them off. "[I said]: "Oh, baby, your hair's beautiful. Come on,'" he says. "If I would have really reacted, then she would have a complex about her hair."

Still, Rock couldn't let it go. "It sparked something in me," he says.

Oprah.com: Oprah's hair throughout the years!

What Rock discovered is a $9 billion industry that affects the daily activities, wallets, self-esteem -- and even the sex lives -- of black women. Because women spend so much time and money on their hair, Rock says men are forced to adopt a hands-off policy.

If you've got a weave, your scalp's like a beat up highway
--Chris Rock

"You cannot touch a black woman's hair. You are conditioned not to even go there," he says. "When I was a dating guy, I dated women from different races. Anytime I was with an Asian or a Puerto Rican girl or a white girl, my hands would constantly be in their hair. Like my hands were thirsty."

One of the first lessons Rock learned on this journey was that women do their hair for one another. "They say it's for the men, but it's really for the women. Because guys don't care," he says. "There's no point in the history of the world where men were not sleeping with the women in front of them. We take what we can get."

Actress Nia Long, who Rock interviews in the film, agrees. "There's always this sort of pressure within the black community like, if you have good hair, you're prettier or better than the brown-skinned girl that wears the Afro or the dreads or the natural hairstyle," she says.

Rock found the biggest moneymaker in the hair business to be weaves. Black women can spend six to eight hours getting their hair braided into tiny sections. Stylists then delicately attach tracks of hair -- which can be simple extensions or full wigs -- to the braids.

"If you've got a weave, your scalp's like a beat up highway," Rock jokes.

Women who wear weaves stop by the salon for regular washes, conditioning and tightening, but the real expense lies with the hair itself. Rock says he was shocked to learn that regular women spend thousands of dollars on weaves -- and even put them on layaway.

Rock discovered the hottest hair on the market is found in India, where human hair is the number two export behind software. "This is some of the worst poverty in the world," he says. "I don't think [people] know they're walking around with $1,000 on their head."

While in India, Rock witnessed a tonsuring ceremony at the Venkateswara Temple. Every year, more than 10 million people cut their hair off as an offering to the Hindu gods. "In India, hair is considered a vanity, and removing hair is considered an act of self-sacrifice," he says.

"These people have no idea where their hair is going or how much it's worth. The money made at this temple is second only to the Vatican. The hair collected here is auctioned off to exporters who distribute it around the planet."

Another staple of the industry is relaxers -- also called "creamy crack" by some. While women of other races use perms to add curl, black women use them to straighten their hair. "You name a black woman, any black woman," Rock says. "They've either had their hair relaxed, or they're having their hair relaxed right now."

The active ingredient in relaxer is a substance called sodium hydroxide. The chemical is so strong it can burn a woman's hair off -- which is why Rock is urging parents to stop the relaxing addiction now. "This kiddie perm has to stop, okay? They shouldn't have to worry about that till they're in their teens," he says. "Putting those chemicals in that child's hair is just not cool."

Rock says he tells his own daughters they're beautiful every moment he can --and has only one answer when it comes to questions of having good hair. "Whatever makes you happy is good hair," he says. "Do your hair for you, and you will be happy."

Oprah.com: Find the right look for you -- risk free!