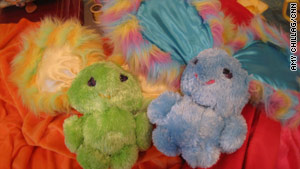 On the plate was a transfer drawing of colorful, mouse-like creatures with large saucer ears and big black eyes.

"I said, 'Grace, what are these little characters? What do you call them?' " Garlow said.

"And that's when she said 'Mom, they're my representatives ... they come to children who are sad and lonely or who were meant to have a better life.' "

It touched the unemployed, 48-year old Atlanta, Georgia, mom's heart during a time when she wasn't feeling too good about herself or her job prospects.

It would eventually lead to a new project for the graphic artist who had spent months looking for work in the corporate world -- a line of stuffed animals based on her daughter's drawings.

"Every day, I would sit at the computer ... doing work, rewriting my resumé and cover letters," she said. "In between doing that, I would go over to my drawing table and work on this project and slowly, over time, it just felt like this is what I really wanted to do."

One day, a friend with marketing experience visited and suggested that she should, in fact, make the dolls her life's work.

Now, she has her own business and faces the same reality that many small businesses do -- trying to get off the ground in a tough economy.

Garlow turned her basement into a workshop, cutting patterns, writing story lines and sewing prototypes to turn "The Representatives" into dolls.

Today she has four completed doll prototypes and story lines to go with each main character.

Bo-boo, a deep purple creature with fuzzy ears, is the peacemaker who shows up to quiet a child's fears. Ta-moon-a is little and gentle -- she "puffs you back up when you're feeling low," Garlow said, hugging the dolls against her torso as she speaks.

She hopes to market the dolls to parents going through hard times -- financial difficulties or maybe military members preparing to deploy overseas, leaving their children behind with relatives.

"With the childhood poverty rates and the way the economy is going ... there's a lot of uneasiness and I think children can be comforted by these," she said. "Maybe [they] could help somebody so they don't fall through the cracks."

"I think they are needed around the world," said Gracie, now 12.

For four hours after dropping off her children at school, Denise sits down at her drawing board and creates. Then she works on the business side of things -- which is completely new for her.

She's registered as a limited-liability corporation (LLC), "A Place of Good." She opened a business checking account and filed for patents, trademarks and copyrights for her creations.

Now comes the big hurdle, getting someone to mass produce the dolls. Each one takes her 20 hours to make by hand and buying materials gets expensive.

So far she's spent about $2,500 dollars on materials, copyrights and forming the LLC and another $5,000 to keep a lawyer on retainer to protect her ideas.

Her husband's consulting business dried up, so she's also substitute teaching to help pay the bills.

"It's just month by month," Garlow said. "I take the expenses and average them out over time ... so I don't exceed what I have."

She said that even if the dolls don't take off, she's taught her daughter by example to keep moving even in down times.

It's really a lesson for anyone unemployed right now, she said.

"If an opportunity for you to be employed doesn't rise up, you still have time -- so the question is what are you going to do with your time?" Garlow said. "The thing I would advise is to listen and find out what you really like, what really moves you."