Saying thanks to soldiers with quilts 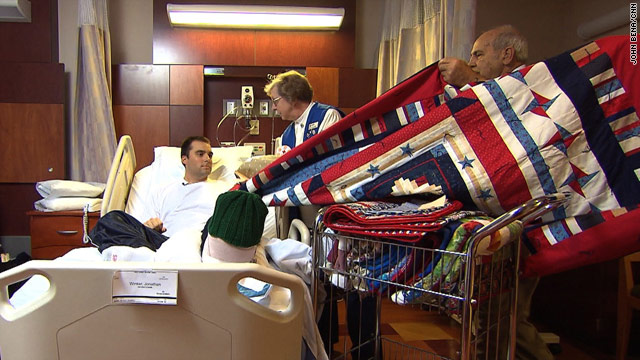 Handmade quilts to give thanks
STORY HIGHLIGHTS

Scotia, New York (CNN) -- Christina Powell folds the red, white and blue quilt before it is packed up and sent to Andrews Air Force Base, some 400 miles away in Maryland.

"I don't like seeing so many young people go away and come back wounded," Powell says. "Unfortunately right now it's just a fact of life and I try to do what I can.

"Our servicemen need to know that it's not just their family and friends that are supporting them. There's a whole country rooting for them, and I'm one."

The quilt is one of several that Powell and her fellow members of QUILTS -- Quilters United in Learning Together, Schenectady -- have made as part of the Quilts for Injured Soldiers project.

"Several years ago," says Powell, "I heard at our quilting guild meeting that somebody wanted to organize this and get it started in our area, and I thought 'I can do that.' I can just change the fabrics and make it more patriotic. The more I did the more I wanted to do, and now, I just do it. This is my 27th quilt for this project."

The quilt Powell recently made for the project is a large bed quilt.

"We have the red, white and the blue, and the stars and the stripes," Powell says as she holds up the quilt top. "It's perfect, don't you think?"

Powell has been quilting for 25 years, and her sewing room is filled with a wide variety of colorful threads and a seemingly endless supply of yard lengths and squares of fabrics she has collected over the years.

"I've probably made 20 to 30 bed quilts, more than 100 baby quilts for another charity event, and innumerable amounts of wall hangings that I make and give away," she says. "It's my pleasure to make it and to give it. It just makes me feel good."

Finished quilts for soldiers are boxed up and sent to Maryland, where the Quilts for Injured Soldiers project began in 2003. Pat Baker is the project's chairwoman, and the quilts are delivered directly to her front door in Hughesville, Maryland.

"It's like Christmas every day when a box comes in," Baker says. "Especially if you're a quilter. You don't know what you're going to get when you open that box."

As the number of wounded soldiers increased, so did the need for more quilts. Baker and other members of the Quilters Guild of Southern Maryland couldn't handle the need, so they put an ad in a national quilting magazine.

"Now," Baker says, "people from all over the United States, Canada and even Australia have donated quilts."

In her bedroom hallway, several large bags are stuffed full of more than 70 quilts and blankets to be brought to Andrews Air Force Base and handed to the soldiers as they arrive back in the United States.

"Some of our quilts are separated because of the military affiliation. You don't necessarily want to give an Army guy a Marine-themed quilt," Baker says, laughing. "It's all one military, but they each love their specific branch."

A letter is attached to each quilt telling soldiers about the project and thanking them for their service, Baker says.

At Andrews, American Red Cross volunteers take over the operation, delivering the quilts to soldiers.

Powell's quilt found its new home with Pfc. Jonathan Winker of the Wisconsin National Guard. Winker returned from Iraq with a crushed foot and bruising on his leg.

"When I was passing through all the hospitals and medical centers on my way home, I noticed all these quilts on pretty much all of the hospital beds," Winker says.

"Every one was different, and all of them are really beautiful. I think it's awesome that they put their time and effort into making these. It's a great way to say 'thank you' to the wounded soldiers."

Winker, whose father and uncle served in the Marines, said he'll probably put the quilt in his bedroom "so that it's close to me all the time."

On the back edge of Winker's quilt is a patch sewn in by Powell that reads: "Thank you for your service to our country. This is a small token of appreciation for all that you have been through. My prayers for you are contained in this quilt."