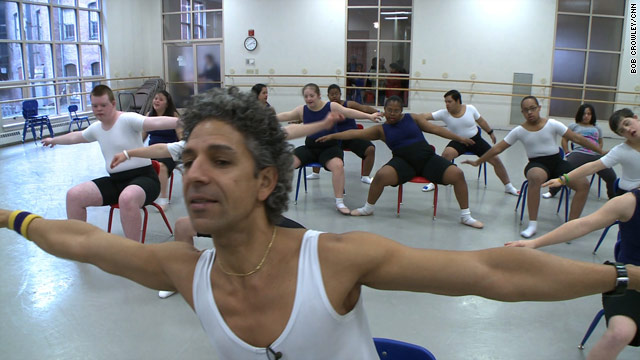 Boston, Massachusetts (CNN) -- It's early on a Saturday morning, and Sarah Markowitz limbers up before her dance class begins.

Sarah stretches on the bar at the school run by the Boston Ballet as her fellow students start to wander in. They are all excited, because today they get to perform for their parents.

"I like dance because I like Gino," Sarah says, referring to Gianni di Marco, the instructor for this class of more than a dozen very special dancers. Gino, as his students call him, has taught various ballet classes for the school but now focuses mostly on this one, Adaptive Dance. It is a class specifically for kids with Down syndrome.

"It's about movement," Di Marco explains. "It's about trying to coordinate the body with the music and have joy."

As a conga drumbeat fills the room, the class begins. Di Marco starts in front of his students. They are all seated, facing the floor-to-ceiling dance studio mirror.

He leads them through a series of motions timed to the rhythm, gradually working to a standing position. They are all smiles, and Di Marco encourages them with "Oh, yeah!" as they shout with enthusiasm, bodies swaying, feet stomping.

"Dance is something that has no limitations," Di Marco says. He leads them all in a circle, a pied piper with his loyal and happy group. They each take turns, one at a time, in a freestyle dance in the center. High-fives, hugs and fist bumps are common as each of the friends completes his or her routine.

The program started in 2002 and was the idea of Michelina "Mickey" Cassella, a physical therapist from Boston Children's Hospital who also works with dancers from the Boston Ballet Company.

"I wanted them to come into this building," she goes on, "and to be able to participate in a class like other children."

Though not a dance instructor, Cassella is always there to help guide the students if one of them becomes distracted or just needs a little encouragement.

"They're moving to music beautifully," Cassella says. "They're developing moves we didn't even know they could do!" She has seen these kids grow into teenagers during their time here and has been amazed by their progress. "It's just been a beautiful thing to watch."

In the studio, Di Marco has brought the parents in to watch their children perform. Anne Markowitz smiles as she watches her daughter, Sarah, lead the class through spontaneous poses, using the opportunity to ham it up a little.

"I think it's fabulous," Anne Markowitz says of the program, and Sarah loves every minute of it.

Down syndrome is nothing new to Markowitz, nor are the many capabilities of her daughter and the rest of the students. "It doesn't matter what your special needs are," she says. "You can do; you can dance; you can express yourself."

Di Marco explains that his students were sometimes hesitant to join in when he first started teaching them. But now he thinks dance has given them all a confidence that goes beyond the dance studio.

The reward goes both ways, however. Di Marco says that seven years ago he was nervous when the classes began. But now, he says, "Here I am having the time of my life teaching these children."

This is the last class of the session, and the students won't be back until March. Di Marco invites the parents to join their children in a dance. They form a circle again, but this time each student shares a dance with their family members instead of solo. The excitement culminates in one large group hug in the center. They are all exhausted and all smiling.

Di Marco, his arms outstretched as if to embrace every one of them, says, "This is life. I love you guys. Thank you for bringing your children to play with me!"