Life for wives of pro athletes no 'fairy tale' 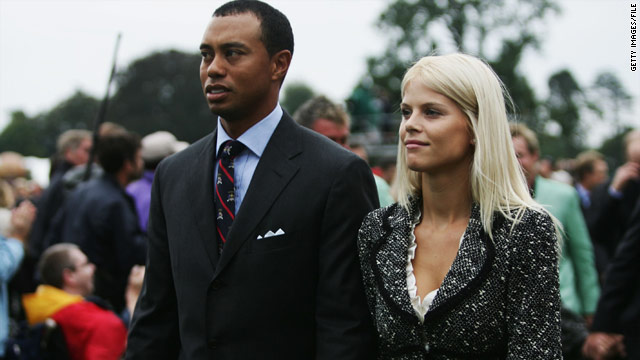 (CNN) -- Erin Crispin feels a great deal of empathy for Tiger Woods' wife, who has been thrust into the spotlight.

These women live a lifestyle the public envisions as glamorous, married to men who pull in multimillion-dollar salaries, travel the world and are able to provide a lifestyle of privilege for their families.

But along with the good times comes an enormous amount of scrutiny in the fishbowl known as fame.

"People tend to see the big-time athletes and think it is all glitz and glamour," said Crispin, who started the Web site Married to a Baller to share her experiences and help the wives of other pro athletes. "But this is our lives, and it's real."

Andrea Butler was just 19 years old when her then-boyfriend, Caron Butler, was drafted into the NBA.

Now a 27-year-old college student who is expecting their second child, Butler said her life is just like any other wife's and mother's, with the exception that her husband plays basketball for the Washington Wizards.

"I hate that people think we live this fairy-tale life," said Butler, who is pursuing a degree in social work. "People believe that money makes life easy, and that's not always so."

Butler said she has been disappointed with the attention focused on Woods and his wife since he crashed his SUV outside their Florida mansion.

"That's their personal life; let them handle it," Butler said. "We don't know what positive things they have done, but the minute something negative happens, [the media] jumps all over it, and everybody wants to know what happened, and that disgusts me."

On Wednesday, Woods released a statement on his official Web site, apologizing for his "transgressions," just as US Weekly magazine printed a story alleging that Woods had an affair with Jaimee Grubbs, a 24-year-old cocktail waitress.

The magazine also published what it said is a voicemail message from Woods to Grubbs, imploring her to "please take your name off your phone" because "my wife went through my phone and may be calling you."

CNN could not independently confirm that the voice on the recording was Woods'.

Neither Woods nor his wife has spoken publicly about the allegations, in keeping with the private and protective nature both have exhibited concerning their family life.

The pair are the parents of a young son and daughter, and even before their marriage, Woods and Nordegren were tight-lipped about their relationship.

A 2004 Sports Illustrated story written when the couple was engaged noted that "Woods keeps a famously tight circle, and he has a history of bloodlessly excommunicating any intimate who crosses him."

"Nordegren knows what is expected of her. Approached for an interview at last month's PGA Championship, she smiled sweetly and said with a light accent, 'I'd rather not answer any questions. Thank you.'

Steven Ortiz, who interviewed more than 40 wives of professional athletes for a forthcoming book on sports marriages, said these women learn early on to be guarded about their personal lives and their emotions.

"They don't know who they can trust," said Ortiz, an associate professor at Oregon State University. "There is this list of unwritten rules of do's and don'ts that these women must learn, and here are lots of stressors."

Such worries can include everything from having to relocate at a moment's notice to the single parenting many wives take on when their husbands are busy working, Ortiz said.

The wives act as the main support for their husbands, he said, and are called upon to keep the home life flowing smoothly so the athletes can focus on their careers.

But those jobs usually mean many days of travel, and having their husbands absent so frequently can spur concerns about other women, Ortiz added.

"The fear of infidelity or the possibility of infidelity can be extremely stressful," Ortiz said. "The wives would say, 'We have no control over him when he is away from home.' "

Charrisse Jackson-Jordan is a former president of Behind the Bench, the National Basketball Wives Association, and she believes that too much is made of athletes and tales of other women.

"The first thing people say is, 'How do you deal with the groupies?' " she said. "Who cares about the groupies? Every profession has women who may be after a man, or vice versa, because of money."

Jackson-Jordan's husband, Eddie Jordan, is a former NBA player who now serves as the head coach of the Philadelphia 76ers. She said the wives of basketball players develop a bond.

Behind the Bench provides an outlet for those women to express themselves with a group of women who can relate, she said.

"Sometimes people don't take you seriously just because of who you are married to," Jackson-Jordan said. "You can be going through something, and their attitude is like, 'Yeah, just go buy yourself something, and you'll feel better.' "

Cristina B. Versari, director of the sport psychology program for the San Diego University for Integrative Studies, has been counseling NBA players since 1989.

Whereas many sports organizations offer guidance to team members on how to deal with the lifestyle afforded them as professional athletes, there are fewer resources for the wives. Versari has helped fill that gap by making her counseling services available to family members.

Having a husband who is constantly away can be less than glamorous, Versari said.

And many couples' marriages don't survive after the athlete retires because a wife may be unable to adjust to his returning full-time to the home.

"There are so many benefits these families have," she said. "The compensation is higher than many other professions, and there is the sophisticated lifestyle, but there is this other side that no ones sees."

Erin Crispin's husband now plays basketball in Italy, and she said she tries to keep the attention that comes with being an athlete's wife in perspective.

"What your husband is getting attention for is 1/100th of the person that they are," she said. "It's a different feeling when so many people are relating to your husband on just one dimension of who he is. I just have to step back and remember that these people are just looking at him through one lens, and that's how they know him."