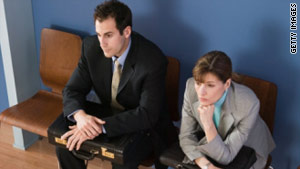 If your job search gets stuck in a rut, there are ways to revitalize your efforts.
STORY HIGHLIGHTS
RELATED TOPICS

(CareerBuilder.com) -- According to the Bureau of Labor Statistics, 36 percent of unemployed people --or 5.4 million -- had been without a job for 27 weeks or more in September 2009.

Whether you're out of work for five days, five weeks, five months or five years, any period of unexpected unemployment can be frustrating -- especially when it seems to go on forever. Although the economy seems to be showing signs of recovery, any job seeker who has been out of work for a long time will tell you: It's still not easy to find a job.

"Even though there are positive indicators, companies aren't adding jobs now at the rate they cut jobs over the last year," said Noah Blumenthal, best-selling author of "Be the Hero: Three Powerful Ways to Overcome Challenges in Work and Life." Despite that, Blumenthal reminds us that economic activities are cyclical. "Every boom feels like it will last forever and so does every bust. But none of them do. Know that things will turn around. The jobs will come back."

Laura Torres, a 28-year-old development associate in Boston, knows firsthand about being frustrated with a job search. She was laid off in December 2008 and didn't find a job for about nine months.

"The most frustrating aspect was not feeling totally in control of the process -- particularly once you started interviewing at a job," she recalled. "Obviously you can play the game and even play it well, but your fate is still up to a small group of people. The agonizing wait between the interview and the follow-up is eerily reminiscent of trying to date someone who 'just isn't that into you.'"

Elena Sokolow-Kaufman, 30, who works at small nonprofit in Massachusetts, also had a frustrating job search. After being unemployed for a little more than two months, she reached a breaking point.

"I had sent out a lot of résumés and had a few interviews for specific job opportunities, but nothing seemed like it was moving forward. At the time I was going on a lot of informational interviews, and at that point I started to feel very burned out," she recalled.

If you do reach a breaking point like Sokolow-Kaufman, Blumenthal said it's important to switch things up and try something new in your job search. Doing so will reinvigorate you and help you stay motivated.

"When you've been searching [for a job] for a long time, it can wear you out. You need to do things to keep you excited about your job search so that you keep going," he said. "The most important thing you can do is keep yourself eager, motivated and energized to continue the search."

To revitalize her efforts, Sokolow-Kaufman said she started a blog, in addition to working on her search in coffee shops with friends who were in the same position.

"It helped me a lot to feel less isolated and was a good reminder that many other people were in the same boat I was in," she said.

Torres also took measures to revive her job search by narrowing her focus in order to find a job she really wanted. In the meantime, Torres challenged herself by applying for jobs outside of her interests or background.

"I never got interviews for these jobs, but it helped me think outside the box a little," she said. "I also sometimes just had informational interviews with people whose careers were markedly different from mine. Again, this was to broaden my horizons a bit and give me more perspective."

1. Go online
"You've sent out more résumés than you can count. But have you tweeted? It's a social networking world. Build your online connections on services like Twitter, Facebook and LinkedIn. Then use that platform to make value-added observations about your line of work and job searching. You never know where your electronic connections can lead," he said.

2. Separate yourself
"Hiring managers and recruiters receive tons of résumés. Some are better than others, but frankly, none of them stand out. You need something else," he said. "Try writing an article or two about your field. Print them up on glossy paper with a nice graphic design. Add a professional bio, and put it all together in a nice folder. Now, instead of sending a résumé, you're sending a press kit on you. That stands out."

3. Have fun
"I know a woman who once sent her résumé folded up and stuffed inside of a baby sneaker. Her note said she was sure to be a shoe-in for the job," he recalled. "If you are bored with your job search, it will show in your materials, your applications and your interviews. So have some fun." (And yes, the shoe-in did get the job.)

4. Set a big goal
"You've already met 100, 200, 500 people? Set a goal to meet and have one-on-one conversations with 100 new people this month. Is it possible? Can you do it? Use Facebook. Go to professional meetings. Ask 10 friends to introduce you to 10 new people. It doesn't matter if they are in your field. This is the "Six Degrees of Separation" game. Meet up and let the new connections take you where they will," he said.

5. Go to work
"Volunteer at a local charity or political organization. You have the time, and this helps you in so many ways," he said. How? It feels good to help; you're using your skills; you're meeting new people; you're getting off the couch and out of the house; and you will build your stockpile of stories. "When you meet people or interview, the connections you make are through your stories. What better story to tell than something that happened while you were helping make the world a better place?"

Ultimately, Blumenthal reminded job seekers to treat their job search like a job, and like a project that has a long-term objective.

"Do what you would do if this were such a project. Celebrate milestones and accomplishments along the way. Appreciate what you love about this job. After all, you can work in your pajamas, set your own hours, work from Starbucks and pick your kids up from school."