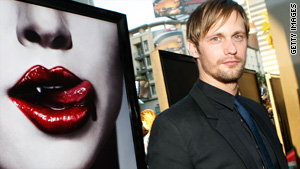 Actor Alexander Skarsgard has a taste for female necks in the vampire TV show "True Blood."

(The Frisky) -- When I try to explain my ardor for HBO's trashy-fabulous soap opera "True Blood" to my dude friends, they either shrug and change the topic, or question whether I've been writing for ladyblogs for too long and am suffering from a form of Stockholm Syndrome.

Dudes just don't dig bloodsuckers, since vampires pretty much look like girls. We prefer zombies, because we love chainsaws, flamethrowers, and samurai swords.

And because, on some level, we know that besides being vehicles for sperm, our other important, if lesser, genetic imperative is to defend our loved ones from hordes of unthinking, flesh-eating metaphors for current social anxieties.

To most guys, vampires are the monster movie equivalent of that sensitive man-sponge in college who plays acoustic guitar in order to seduce chicks. They're what you get when you cross your average Renaissance Fair enthusiast with a mosquito.

And what's with their greatest weaknesses being most kinds of Italian food, Sunday school, and the sun, which helps flowers grow? Really? Why women find date-rapey parasites who wear capes compelling must have something to do with deeply primal fears.

A vampire is a monster, who looks, acts, and talks like a man. Who is passionate, romantic, and tortured. To surrender to this character is to play with fire. The vampire, in many ways, is the prototype of the bad boy.

Women love bad boys - they're exciting, and the chance to change him, to break him like a horse, must be an irresistible challenge. If self-destruction weren't seductive on some superficial level, then no one would ever need rehab.

But I am like most guys in that I am a fan of zombie flicks. "28 Days Later" may possibly be my favorite movie ever. I'm also a fan of alien and robot movies, but more often than not, it seems women are more adept at dispatching those.

Zombie movies indulge male power-fulfillment fantasies. We enjoy pretending to be dragon-slaying knights or bad-guy-perforating cowboys or Bruce Willis, saving our ex-wife from a skyscraper full of terrorists.

Before any feminist blood vessels burst, let me explain that this fantasy goes hand-in-hand with a male-specific fear that speaks to ancient genetic programming. That for all our swagger, testosterone, and machismo, we cannot protect those we love.

The disaster call for women and children to evacuate first isn't chivalry, inasmuch as it's evolutionarily smarts. The women and children will continue the species; the men are disposable. We fear being useless, especially once we have issued forth our baby-making essence.

The Frisky: Where all the good guys are

In "True Blood," the vampire Bill has decided to change himself, to fight his ferocious nature. He struggles to be a better, um, corpse. He rejects the cold, bloodthirsty vampirism of his peers, and tries to embrace those human virtues he once had: selflessness, mercy, kindness, and justice. In some ways, he's less a vampire and more a superhero.

Then he falls in love with someone he is told he shouldn't. And his love for Sookie, a human woman, is a choice he has made, regardless of the scorn heaped upon him by the undead and the living alike.

He protects her, despite his fears that he is completely impotent, powerless to defend her from a world that despises them both. And she returns the favor, despite her fears that underneath sweet words and passion is an animal waiting to pounce. A little bit for men and women.

I watch "True Blood" because chicks will dig it when I can talk about Eric and Maryann and Action Stackhouse; it's how I "open" a pick-up artist-style "set." My knowledge of "True Blood" will help me convince turbo-hotties to come back to my sweet fourth-floor walk-up in Queens, where I will love them forever, or until I have to call the unemployment office at 10 a.m., whichever comes first.

Sigh. Oh forget it. I love this show, without condition. I love that Alan Ball followed up his twee meditation on mortality, "Six Feet Under," with a show that's just about hot sexing and gratuitous gore. It's a soft-core comic book, nothing more, nothing less.

I fully accept that there's a part of me that will always be a pear-shaped teenage goth girl. I mean, I'm reading the "True Blood" books, for the love of Godric. Horror movies, books, and television shows reflect our collective fears, and "True Blood" is awesome because it sneaks male fears into a female-oriented program. Also: because all the women are hot and sometimes they show their chest.